Don’t Leave Fragile States Behind in the Fight Against Coronavirus Despite countless lives lost and trillions of dollars spent, violent extremism continues to evolve and spread. Addressing this complex, global phenomenon with roots in local contexts continues to be a top priority of USIP.

For 70 years, the Israeli-Palestinian conflict has affected the Middle East landscape. A comprehensive diplomatic solution has evaded international efforts, leaving some disillusioned about the prospect of peace. Large-scale violence ebbs and flows, leaving communities insecure and enabling the conflict to persist as a rallying tool for extremist actors, thereby demanding continued U.S. and international attention.

As the Arab Spring’s birthplace and its sole fledgling democracy, Tunisia represents an encouraging yet incomplete victory against authoritarian rule and violent extremism. Tunisia’s sustained progress since the 2011 revolution makes it a strong democratic partner in a volatile region. However, an economic crisis, political disaffection, and the inherent difficulties of a major political and social transition continue to threaten the country’s stability. 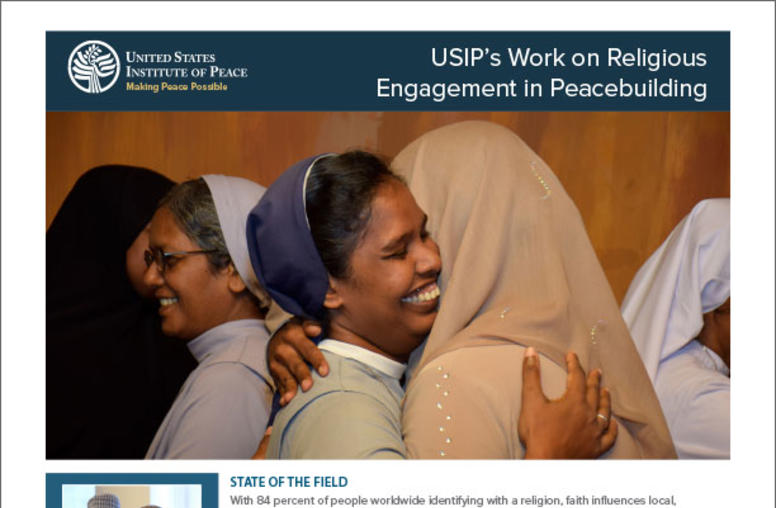 With 84 percent of people worldwide identifying with a faith tradition, religion influences local, national, and international decision-making. Across the globe, violent extremism often is couched in religious terms, and religious discrimination is on the rise. At the same time, people of faith and religious organizations frequently are on the frontlines of peace efforts, assisting communities affected by violence. Although religious considerations have been marginal to peace efforts historically, governments and peacebuilding organizations increasingly recognize the importance of religion.

For decades, North Korea’s provocative behavior and pursuit of nuclear weapons have threatened peace and stability in Northeast Asia. Various strategies to address the problem—including diplomatic, financial, and security incentives and disincentives—have delayed, but not ended, North Korea’s nuclear program. In the face of international condemnation, North Korea’s insistence on keeping its nuclear weapons has led to a diplomatic stalemate and the need for creative solutions to prevent a crisis.