For more than two decades, episodic warfare in the Democratic Republic of the Congo has formed what is one of the world’s worst neglected crises, leading to widespread death, destruction and displacement. In the east, human rights monitors count more than 120 armed groups fighting in the forests, hills and farmlands of Ituri, North Kivu and South Kivu provinces. The violence has never fully stopped since it was triggered in the 1990s by an implosion of the DRC state and effects from the 1994 genocide in neighboring Rwanda.

The violence has multiple drivers. Geopolitical and elite competition in Africa’s Great Lakes region has fueled forms of proxy warfare, leading numerous foreign and foreign-backed armed groups to operate on Congolese soil. Disputes over land and local authority increase volatility. These conflicts are often fought along communal lines — the product of “divide and conquer” policies of governments dating back to European colonial rule. Inter-communal conflict and distrust have contributed to the formation of armed groups claiming to defend ethnic communities in the absence of a strong and neutral military that can protect civilians.

The bloodshed is also fueled by struggles for income, power and profit. Elites in the eastern DRC, often partnered with outside interests, profit from the exploitation of gold, coltan and other minerals, or the production of timber or charcoal, a staple fuel in the region. The DRC’s ill-paid army and local militias protect illegal mining and timber-cutting for a slice of the revenues. Impoverished rural people take part at the bottom of this informal economy in what for many is a struggle simply to survive.

The DRC contains roughly half of the Congo Basin rainforests, including ecologically vital, protected forests. As in states across the Global South, the DRC government tries to preserve its environmentally protected areas through a model of conservation law enforcement shaped in Africa’s colonial era: ranger units that patrol to prevent illegal mining, logging and other resource use. But this system has been pulled into the DRC’s violence in ways that erode its effectiveness — and that in some cases worsen the conflicts. While the DRC is critical, the problem also is global: How can international policies and institutions help fragile states, especially those facing violent conflict, better protect environmentally critical areas? Answering this question is a crucial part of preventing the worst of climate catastrophe and preserving the planet’s biodiversity.

In and around the Congo Basin, the DRC’s dozens of environmentally protected areas total an expanse larger than Poland. Among them, Kahuzi-Biega National Park — nearly the size of Delaware or Luxembourg — is one of our planet’s most biodiverse zones, including habitat for endangered lowland gorillas. But the park illustrates shortcomings of what many critics call “fortress conservation,” as practiced through authoritarian governance and military-style enforcement. Congo’s Belgian colonial rulers established the first preserve in 1937; Belgians and the Western-backed dictatorship of Mobutu Sese Seko expanded it in the 1970s. The park, a UNESCO World Heritage site supported by international environmental groups and the German government, caters to wealthy international tourists. But to build the park, Mobutu forcibly expelled as many as 6,000 of its indigenous inhabitants, from the Batwa ethnic community.

Impoverished and landless, Batwa (also commonly known as “pygmies”) petitioned and protested for decades, winning only unfulfilled promises of reparations. In 2018, groups of Batwa returned to the park to rebuild homes on their ancestral lands. The government unleashed a brutal, military-style campaign by ranger forces that inflicted torture, rape and murder on Batwa community members. As well, armed militias and the DRC army battle for control of illegal mining operations within the park — and this warfare, mining and poaching continue to threaten the park, conservation groups say.

The tragic inequities at Kahuzi-Biega reflect a pattern across the DRC and in other countries where fragile governance, conservation imperatives and valuable natural resources intersect. The “fortress conservation” model dismisses any notion of working with indigenous peoples and their attachment to environmentally sensitive lands, forcibly removing such groups from protected areas on the assumption that the state can better protect the environment with fences and armed rangers. These forces often strike at the most vulnerable people, who may transgress conservation laws by farming or cutting wood to make and sell charcoal in a struggle simply to survive. Yet fragile states are unwilling and unable to enforce those same laws against corrupt civil or military officials, well-funded criminal groups or armed militias, all of whom are able to wring profits from the land through illegal mining, logging, poaching or other exploitation.

As in other fragile states, the DRC’s prosecution of powerless, marginalized people — but not those with money, armed force or political influence — is reinforced by a judicial system too weak to equitably enforce the rule of law. The state holds many detainees beyond the legal time limits for charging and trying them. In protected areas such as Virunga National Park, civilians have been taken to military courts, accused, often with little or no evidence, of collaborating with armed groups. Judicial procedures tend to disproportionately burden the poor with fees, fines and unaffordable costs of legal counsel or bail. People whose “criminal” motivation was simply to feed and shelter their families languish, underfed and exposed to disease, in the DRC’s packed, dangerous prisons.

Our research, funded in 2020 by a USIP grant, found that among the DRC’s citizens, these inequities undermine the legitimacy of the state, build resentment, and encourage aggrieved communities to oppose conservation policies that they see operating only in the service of more powerful constituencies, including foreign environmentalists and tourists. The grievances over injustice open opportunities for anti-government groups such as armed militias — some operating with support from Rwanda — and even affiliates of the Islamic State extremist network.

During fieldwork, we heard a too-typical account of one interviewee who lives near Virunga National Park: He was caught producing charcoal in the park and imprisoned. His family had to borrow money to pay for his release, after which he found no way to pay the debt or school fees for his children. Therefore, he said, he had no choice but to re-enter the park to produce charcoal in an area controlled by armed groups rather than government forces. In the Okapi Wildlife Reserve, our research found that people who were mistreated by the state’s ranger force, which is part of the Congolese Institute for Nature Conservation (ICCN), then joined armed groups that protect artisanal gold mining.

While protecting biodiversity means halting illegal mining, logging and other resource exploitation by armed groups, reliance on military-style operations has proven ineffective and unsustainable. Here is why:

Effective, sustainable preservation of the Congo Basin will require a broader approach in eastern DRC that addresses root causes of illegal resource exploitation. Law enforcement must harmonize with steps that engage, rather than harm, local populations: conservation education, development of alternative livelihoods for groups constrained by conservation measures, and the provision of basic security for local populations. The current emphasis on retributive justice should be converted to permit restorative justice approaches, which include raising communities’ awareness of biodiversity protection.

More efforts should be invested in holding accountable those at high levels who finance, organize and protect illegal resource exploitation, a politically sensitive issue. Donors could try to address army involvement in illegal exploitation through security sector reform efforts. They could also support Congolese organizations in investigating and documenting illegal resource commodity chains.

We must explore ways to partly devolve enforcement to local inhabitants. This effectively has occurred in Itombwe Nature Reserve, where eco-guards and community members patrol jointly under governance structures known as “community conservation committees.” If these patrols catch community members conducting banned activities, they inform the local customary chief, who can adjudicate the case. While this approach must confront risks of favoritism, it may still be preferable to exposing minor offenders to the abusive Congolese justice and prison system.

In the DRC and globally, governments and international institutions should advance steps such as these to shape the more effective, sustainable environmental protection that our world needs to limit climate degradation and preserve biodiversity, without harming local communities.

Judith Verweijen is an assistant professor in international relations at the University of Groningen in the Netherlands. This essay is based on a research project funded by a grant from the United States Institute of Peace, as is the report Armed Actors and Environmental Peacebuilding: Lessons from Eastern DRC. 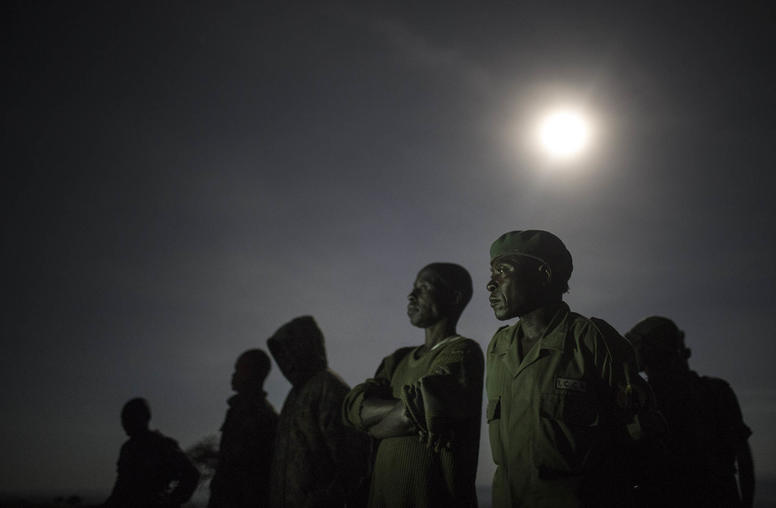