Why did it take a Loya Jirga, or consultative assembly, for the Afghan government to decide on the release of the final 400 Taliban prisoners?

Mukhopadhyay: Kings and presidents, alike, have convened loya jirgas, or grand assemblies, throughout Afghan history to engage tribal elders, religious leaders, and other notables about matters of national concern. The jirga is a site for consultation and a means to accrue popular legitimacy. Jirgas have anointed new leaders, ratified constitutions, considered matters of war and peace, and shored up support for regimes in times of crisis. In 2002, an "emergency" loya jirga established a transitional administration with Hamid Karzai as its leader. A year later, a constitutional loya jirga was convened to draft the current constitution.

Last week, the Afghan government held a jirga to consider the proposed release of several hundred high-value prisoners, one of the Taliban's pre-conditions for intra-Afghan negotiations. Having already released thousands of prisoners, the government was likely motivated by more than the need to adjudicate this particular decision. Instead, the jirga served several political purposes. It gave President Ghani the opportunity to rally public support before moving forward with a negotiation process that has, until now, kept the Afghan government on the sidelines. The jirga's host, Abdullah Abdullah, who recently conceded the presidential election to Ghani, had a chance to demonstrate his ongoing political relevance as the Afghan government's lead on the negotiations.

A number of key elites, including former President Karzai, used the platform to put forth a unified front on behalf of the Afghan state vis-a-vis the Taliban and foreign powers. Their participation, along with thousands of citizens, also demonstrated that, even in this highly centralized government, the president did not have the authority to make such a big decision on his own. And, finally, the assembly’s work signaled to the government's American partners its commitment to advance a peace process in which the U.S. government remains seriously invested.

When will intra-Afghan negotiations begin, and what should we expect in the early stages?

Walsh: The sides are hinting at an opening ceremony this Sunday, August 16, although this peace process has missed many deadlines and may miss more. It is not yet fully clear, for example, exactly when all 400 prisoners will leave custody, how much turnaround time the parties will feel they need after this happens, or whether the Taliban will have additional demands—for example on the mechanics of the talks—before an opening ceremony occurs.

The government and Taliban have agreed that at least the opening round will take place in Doha, Qatar, which also hosted the U.S.-Taliban negotiations that paved the way to this moment. The two sides also agree that at first there will be no participation by any foreigner, though down the road they may see value in a mutually acceptable outsider helping mediate or facilitate the talks.

Afghan media have reported that the government side’s immediate priority will be a cease-fire to end the war, while the Taliban’s will be the nature of Afghanistan’s future government and how that transition will unfold. Neither is surprising. The government’s main leverage is political power, which it can share if it chooses; the Taliban’s main leverage is violence, which it can stop if it chooses. A successful deal would likely involve finding satisfactory compromises on both, in tandem. Both sides seem to be signaling that they will introduce these core demands from an early stage, but it will likely take months if not longer to work out detailed solutions.

What do we know about each negotiating team?

Walsh: Both sides have appointed generally credible, high-level, and representative negotiating teams.  This suggests that at this stage each takes the negotiation itself seriously, and helps temper concerns that one or both sides will make a symbolic appearance at the intra-Afghan talks before reverting to a battlefield strategy.

The government’s lead negotiator is Massoum Stanekzai, a respected senior statesman who quietly led peace efforts for many years under former President Karzai. He leads 20 other delegates who broadly reflect the country’s political and ethno-sectarian diversity—a particular challenge for the government side, since it represents an entire society rather than a single military-political group. Four delegates are women, a number that underwhelmed many observers despite the undisputed competence of the four.  The team is expected to report to Ghani through the High Council for National Reconciliation, a yet-unlaunched body that reportedly will gather a few dozen of Afghanistan’s top leaders, be led by Ghani’s former electoral rival Abdullah Abdullah, and deliberate on the government’s key negotiating positions.

Leading the Taliban effort will be Abdul Ghani Baradar, the Taliban’s overall number two and arguably most internally respected living member. The lead Taliban negotiator in the room will be Sher Mohammad Abbas Stanekzai, who similarly led most day-to-day negotiations with the U.S. under Baradar’s overall direction. The team beneath them reportedly includes other longtime Taliban negotiators, numerous members of the Rehbari Shura (the group’s highest decision-making body), major military commanders from different parts of the country, some of the group’s top religious scholars, and the five former Guantanamo detainees whom the U.S. released in 2014. This represents a sizeable contingent of the Taliban senior leadership and suggests a generally empowered team.

What role, if any, could the United States play in the intra-Afghan talks? How could the recently announced decision to reduce U.S. troops to less than 5,000 impact the negotiations?

Smith: The two things that the Afghan negotiating team has requested from the United States is to make clear to the Taliban that they cannot dictate the terms of the agreement and that they have no hope of winning by conquest. Therefore, the United States should retain the troops that it currently has until the negotiations are completed.

The agreement with the Taliban said that negotiations should begin in March and the final withdrawal should take place by May 2021, but also stated that the withdrawal would be based on certain conditions being met. One of the conditions should be an agreement that is acceptable to the Afghans and the United States. Next the United States should be explicit about defending key values like democracy and human rights. Up to now, U.S. diplomacy has put a lot of pressure on our allies, the Afghan government, to make concessions like the prisoner release. Ultimately, however, U.S. interests align with those of the Afghan government. The Taliban should understand that the future international financial support they have requested will be more forthcoming if they accept that basic human rights and values need to be preserved in the political settlement. The United States can be impartial with regard to the two negotiating parties, but it cannot be neutral with regard to these principles. 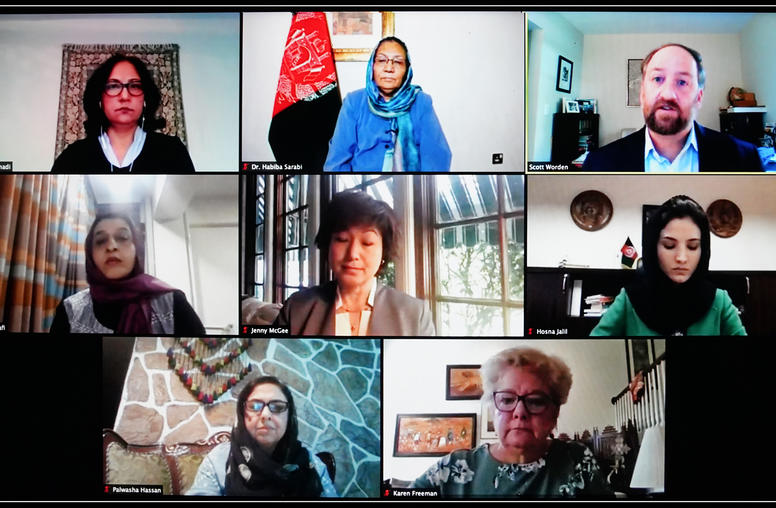 Historic peace talks between the Taliban and Afghan government began in early September, opening a window for peace after four decades of conflict. Afghans, overwhelmingly weary of war and craving an end to violence, are watching closely. This urge for peace is the most important force motivating the talks, and Afghanistan’s burgeoning community of artists articulate it especially powerfully.

When Afghan officials and international donors meet next month to consider future aid commitments to Afghanistan, they will face a changed situation from their last gathering four years ago. Then, the focus was on tying financial assistance to government reform in the midst of ongoing war with the Taliban; peace was barely on the agenda. Now, peace talks between the Taliban and the government have begun, and a new Afghan administration is still taking shape with an agreement that resolved the disputed 2019 presidential election. Meanwhile, fighting and casualties remain at unsustainable levels and the country is reckoning with the COVID-19 pandemic and its consequences.