As the COVID pandemic complicates Afghanistan’s embryonic peace process, government-appointed negotiators urged the Taliban to begin talks without preconditions and stressed that a peace accord must make governments accountable to Afghan citizens. A day after the government announced the release of 71 more Taliban prisoners—a process central to starting talks—the head of the government negotiating team said direct discussions with the Taliban are important to accelerate releases. Analysts have voiced fear that deaths from COVID of prisoners held by the government and the Taliban could stall or scuttle the current peace efforts.

The agreement in February between the Taliban and the United States sought the freeing of prisoners—up to 5,000 Taliban held by the government and up to 1,000 held by the Taliban, to allow an early start to intra-Afghan negotiations on a peace accord. The government, which was not part of the U.S.-Taliban talks, has been freeing detainees in small batches while the Taliban has demanded an immediate release of all government detainees and walked out of technical talks on the release process April 7.

“I think the issue of prisoner(s) is moving on; that will be implemented,” the government’s chief negotiator, Masoom Stanekzai said in an online discussion held by USIP. “I am stressing, as soon as this intra-Afghan negotiation starts, that process [of prisoner releases] will be accelerated much more, in a rapid way. … The logistics and everything else can be discussed face to face and that will be addressed very quickly.”

For the past seven weeks, the Taliban have resumed attacks on government forces following a lull in violence it conducted as confidence-building measure to help prepare its February 29 agreement with U.S. negotiators. The resumed violence has endangered the peace effort and news reports have quoted officials close to that process as saying that COVID deaths among prisoners could undermine it.

Citizenship: The Heart of the Matter

Stanekzai, a former national security director whom the Taliban have tried to kill in suicide attacks, heads a 21-member negotiating team named by the government last month. The government was slowed in forming the team by political disagreements rooted in Afghanistan’s disputed presidential election last September. Analysts have noted that the team is ethnically and politically diverse, which will help it represent Afghans broadly and thus promote a more viable, sustainable peace process. The team’s diversity also will increase its difficulties in reaching a common negotiating position.

We have to consult with the wider Afghan communities … to reflect the wish of the people.

Stanekzai discussed the peace process from Kabul along with a prominent member of the team, Habiba Sarabi, one of four women in the delegation. Both government negotiators underscored that no pre-conditions should be set for starting peace talks with the Taliban, and that all sides will have to make compromises in the peace process.

The two negotiators agreed that a core question for prospective talks with the Taliban will be whether the Afghan state should be shaped as an Islamic republic or as an emirate. Sarabi, who has served as a provincial governor and cabinet minister, noted that even Muslim nations declined to recognize the Islamic emirate declared by the Taliban when they ruled Afghanistan in the 1990s.

“We are not going backward; we have to go forward,” Sarabi said. “In the republic, I am a citizen. But in an emirate, I am not a citizen,” but instead owe fealty to a designated ruler, or emir. For women who are concerned about the risk of losing civil, social and economic rights under a Taliban-style state, the rights of citizenship afforded by a republic will be “non-negotiable,” she said.

In an eventual negotiation over sustaining or changing Afghanistan’s status as a republic, the two sides will “have to get out of just the symbolism of this conversation, not to get trapped in labels,” but to “talk about what they want, what are the interests?” said Alexander Thier, an expert on Afghanistan and development formerly at USIP and the U.S. Agency for International Development who is now at the Center for Strategic and International Studies in Washington. In that negotiation, the vital goal for supporters of Afghan democracy will be to ensure in a future government “the principle that there is accountability” to the citizenry.

Stanekzai underscored the intent of government negotiators to represent as wide a circle as possible of Afghans. The 21 team members, he noted, represent “different generations of the country,” including “young ones that have seen the development, the education, and the changes” of the 19 years since the end of Taliban rule. Early discussions among the team have yielded a consensus that “we have to consult with the wider Afghan communities … to reflect the wish of the people.”

Sarabi noted that women—who initially sought equal representation on the negotiating team, with half of its seats, had compromised to accept 25 percent—and then found their representation reduced to 20 percent. They have four members among the 21. Stanekzai vowed to add another woman as a delegate and said that the team’s women members are playing an outsized role in its early work.

Thier stressed the obligations weighing on the international community to shape conditions, in the face of the COVID pandemic, that can help sustain a peace process. “The U.S. and NATO forces need to make three commitments,” he said. “The first is to leave … the country if that’s what the parties agree on.”  At the same time, said Thier, “they have to be committed not to leave … if the peace process is not moving forward.”

Finally, the international community must “commit to continue to support Afghanistan both in economic and security terms” to allow a real stabilization of the country. “When I first started researching peace in Afghanistan, … people were looking at how to use things like vaccine campaigns and humanitarian campaigns” to persuade warring factions to halt violence.

Exhausted by war, “Afghanistan needs peace,” said Stanekzai, and thus negotiations are obligatory. “Whether today or tomorrow, we must do it,” he said. “And for that reason, I urge the Taliban that they have to put [aside] those symbolic excuses, conditions, preconditions. We have to sit face to face [to see] what we can do … to end this war.” 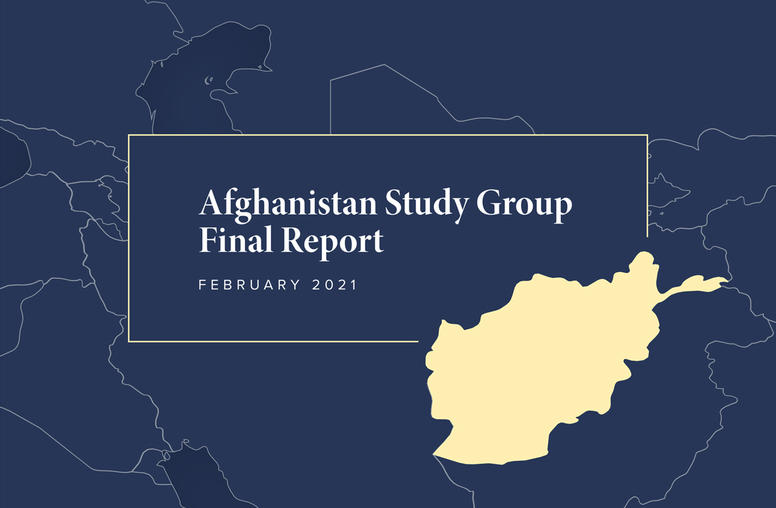 In December 2019, Congress established the Afghanistan Study Group and tasked it with identifying policy recommendations that “consider the implications of a peace settlement, or the failure to reach a settlement, on U.S. policy, resources, and commitments in Afghanistan.” The Study Group’s report, released on February 3, 2021, concluded that there is a real opportunity to align U.S. policies, actions, and messaging behind achieving a durable peace settlement to end four decades of violent conflict in Afghanistan. This new approach would...