The peace accord that halted a half-century of violent conflict in Colombia has reached a critical juncture. With the population almost evenly split over the terms of the 2016 agreement and a new government led by the party that opposed it, analysts and political figures see sustainable peace as increasingly endangered. Yet virtually no one in Colombia seeks to risk rekindling a war that killed at least 220,000 people and displaced more than 7 million. Rather, the danger arises from divergent priorities and viewpoints on how to proceed with the deal. Working to resolve those differences is the multi-party Peace Committee in Colombia’s House of Representatives—an effort displayed last week at the U.S. Institute of Peace in a discussion among six of the panel’s members.

The committee, which includes every political current in the Congress, was organized in 2010 to monitor the peace process and now maintains a dialogue on issues that have divided the country in the wake of the peace accord. The issues include disagreements over justice for victims and perpetrators, commitments on land reform, reintegration of former combatants, reparations, and whether the government and the Revolutionary Armed Forces of Colombia (FARC) it made peace with are living up to the pledges they made. Since the panel of supporters and skeptics has no legislative or oversight powers, it is a singular environment to seek common ground and generate ideas, said Representative Juanita Goebertus, a member of the centrist Green Party.

“There are many different positions,” Goebertus said. “What we share is a commitment to work toward peace.”

The discussion, co-hosted by the Inter-American Dialogue and the Wilson Center, was held against the backdrop of what USIP senior advisor Steve Hege said were “serious challenges” to the peace process identified by the Kroc Institute for International Peace Studies, a monitor of the agreement’s implementation. The pressure points include the shutdown of demobilization camps for ex-combatants; assassination of social leaders; and limited progress in moving peasants from cultivating coca to legal crops.

In addition, although the Special Jurisdiction for Peace (JEP) has continued investigating FARC kidnappings and military extrajudicial killings, the neutrality of the court has been questioned and congressional debate continues over its legal framework. The crisis in neighboring Venezuela and the imminent decision regarding the extradition to the U.S. of former FARC negotiator Jesús Santrich are putting strain on the process. Meanwhile, the National Liberation Army (ELN), Colombia’s second guerilla group, has yet to accept the unilateral concessions demanded by the government to reconsider future peace talks.

The lawmakers often agreed on what needs to be done to keep the peace process in motion, sometimes differed, and most frequently took alternative perspectives on how the accord is being implemented under President Ivan Duque, a long-time critic of the deal who took office in July.

Following are highlights of comments by each of the six participants.

If the government manages to resume aerial spraying of coca farms with the herbicide glyphosate, the peace process will be dangerously undermined, said Ardila, a Liberal Party lawmaker from the coca-growing region of Puntumayo. While coca was key economic pillar for the FARC and remains a critical concern for the United States, aerial eradication is a proven failure that leads peasants to resist the state and breaks the accord’s promise of support for crop substitution.

When coca growers’ crops are destroyed they simply move to new areas, Ardila said. Under the American-backed “Plan Colombia,” spraying caused the number of coca-growing departments to expand from seven to 23, and risked the population’s health as shown by World Health Organization studies. These areas need development, health, education and electrification, he said, not eradication. “We need to combat illicit crops in an evidence-based way, not on the basis of politics or ideology.”

The peace deal put Colombia on a positive path, but there are troubling signs of erosion, said Goebertus, a lawyer with a federal security background who helped draft the legal framework of the 2016 accord. The homicide rate at a 30-year low shows what the country can become, while the uptick last year hints at backsliding, she said. The critical areas where the U.S. might assist involve structural improvements in security, reincorporation of ex-combatants, rural development and transitional justice—particularly in the 170 municipalities most affected by the conflict.

The government still needs to shift from a traditional military and law enforcement approach to security to create a working justice system. The most affected towns have six judges per 100,000 people compared with the national average of 11; 76 percent lack technical police investigators; 30 percent have no prosecutors. Meanwhile, the reincorporation of 13,000 ex-fighters is not sustainable: at best, only 20 percent are economically active while at least 2,000 dissident FARC are engaged in organized crime in these areas. As for rural development, ex-President Alvaro Uribe’s focus on security and former President Juan Manuel Santos’s emphasis on peace have failed to get results. Finally, disputes over transitional justice create uncertainty that could push some suspects to take up arms again. “We must address all of these challenges at the same time to take advantage of this opportunity.”

Much of Colombia’s violence was motivated by ideology, not for economic gain, Hoyos said. “The battle is not just to eliminate enemies but also to change our mindset.”

Hoyos, a member of Santos’s centrist National Party of Social Unity, waxed personal to make his case for the importance of reconciliation and patience. His father, a congressman, was kidnapped by the FARC and executed five years later at a time when the government refused to negotiate with the group. “My heart was filled with hatred for more than 10 years,” he said. But during peace negotiations in Havana, the Santos government invited him to speak to the FARC commanders, accompanied by other victim families. “We yelled at them, called them names, we cried for hours in that dialogue. They asked for forgiveness and promised to do no more harm. We came out determined to build peace and put aside the past.”

He said the guerrillas gave up the security of weapons to put trust in the legal and political system. “I am asking the government not to stoke the mistrust. A single match could set everything ablaze.”

The urgency of addressing threats to the peace agreement cannot be overstated, said Pulido, a member of the Radical Change Party and a lawyer trained in alternative dispute resolution. Already, a dissident FARC faction of 2,500 combatants—including one of the negotiators from the Havana talks—is rearming in the area he represents. They can easily recruit impoverished Venezuelans fleeing their collapsing economy next door.

The government must take immediate steps to fulfill the promises of the accord on rural development and facilitating alternatives to illegal economic activities—mining as well as coca production. “Peace must become state policy, and not reflect a government policy that can change with each administration. International support must continue regardless of who’s in power.” Without stability, trust may well erode “to a point of no return,” he said.

David Racero: Peace Is a Process

Urging calm and patience, Racero, of the List of Decency, said Colombia is in a critical test phase that typically occurs two to three years after a peace deal. It is normal, he said, for perhaps 15 percent of demobilized fighters to return to some kind of armed activity. Neither justice nor electricity can be brought overnight. The sons of the people killed by the FARC now sit in Congress with the FARC, talking rather than killing each other. “All the efforts, research, money, forums, mediation—it has worked! The country has changed in 20 years.”

Still, failure to address root causes of the conflict could lead to recycling the violence. “There is tension because many people benefitted from the war and see the peace process as a threat in terms of land, justice and politics.” The key issue is maintaining trust. Racero was in the opposition during the Santos government. “Now I realize we could take steps backwards,” he said.

Gabriel Santos: A View From the Right

The Democratic Center party’s objections to the peace accord have been misinterpreted as a bid to derail it, said Santos, a lawmaker in the government’s coalition. Calling himself a dissident voice in the group, Santos said consensus could be reached despite differing ideas on how to implement the peace plan. “You cannot put an end to the conflict without the solid agreement of society as a whole,” he said. “I was elected to make changes,” he said, noting that his position had defeated the peace accords in a referendum and then won the presidency.

While his fears about the accord have receded over the past two years of FARC demobilization, he said Colombia has changed quickly, making it necessary to “review what was done and alter the law to the present situation.” One sector believes justice is most important, another reparations, while a third puts the highest priority on digging out the truth of the war. “Maybe there’s a need to give a little to get something. Duque wants adjustments to what Santos did.”

“We have an imminent political war and we need to sit down with all the stakeholders—civilian, military, political—and reach a consensus on what the government needs to do.”

In Colombia, protesters are demanding that President Ivan Duque address concerns over economic inequality, corruption, the Venezuela crisis and implementation of the 2016 FARC peace accord in what USIP’s Steve Hege calls the country’s “largest mass mobilization in four decades.”

It began with a few supporters of Colombia’s 2016 peace agreement meeting at a Bogota cultural center. That gathering, in January of this year, soon led to the creation of a WhatsApp group—a platform to discuss how to how to defend the interests of peace amid concerns about the policies of the new government. By mid-July, a spontaneous citizens movement of thousands of Colombian leaders was making its voice heard. Its objectives: to strengthen popular support for the previous government’s peace deal with the rebels of the Revolutionary Armed Forces of Colombia (FARC) and to support the peace process with the National Liberation Army (ELN). 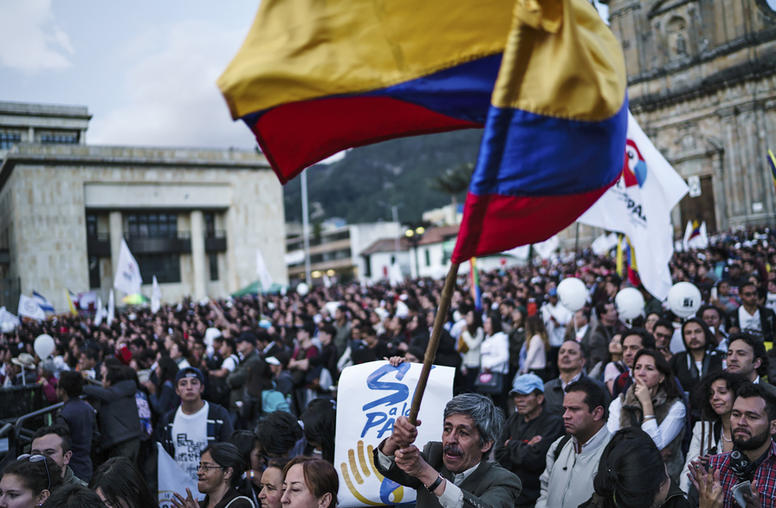 Up an unpaved track, about a two-hour drive from the nearest town in the eastern Andes, sits a small village that could be mistaken for a Colombian hamlet of crude dwellings and vegetable gardens. But appearances aside, something extraordinary is going on here. The outpost’s population, comprised entirely of former guerrillas who fought for the Revolutionary Armed Forces of Colombia, the FARC, is engaged in an unplanned experiment in building peace.