In 2016, a historic peace accord ended the 50-year armed conflict between the Colombian government and the Revolutionary Armed Forces of Colombia (FARC). But implementing the accord—which means cementing the agreement into national legislation and ensuring its provisions reach all corners of the country equitably—remains difficult.

Preventing further violence hinges on the effective, collective reintegration and reincorporation of former combatants into society, as well as compensating victims, returning their lands, and addressing the socioeconomic disparities and political exclusion at the root of the conflict. The humanitarian, economic, and political crisis in neighboring Venezuela makes prioritizing the accord that much more difficult. The Colombian government has also sought various avenues of cease-fires and peace processes with a smaller insurgency, the National Liberation Army (ELN).

Since 2008, the U.S. Institute of Peace has helped prepare Colombia for a political solution to its armed conflict. Because violence in the country is rooted in political and economic exclusion, the Institute prioritizes inclusive, grassroots initiatives by working at the community level to address the core of Colombians’ disputes and each department’s distinct conflict dynamics. In addition to these grassroorts efforts, USIP works with political actors at the national level in an effort to scale solutions and create linkages to support sustainable peace implementation.

The Institute strives to ensure that every sector of society realizes its ownership in the peacebuilding process and can communicate those stakes to leaders. When the Colombian government considers the rights of women, youth, the LGBTQ community, and Afro-Colombian and indigenous populations, it creates a more sustainable foundation for peace.

USIP has provided advice to negotiators, special envoys, and the international community on topics such as peace process design, inclusion mechanisms, and how the implementation of agreements can be strengthened to achieve more sustainable peace. USIP has helped share valuable lessons from Colombia’s peace process with women leaders in Afghanistan, security and justice actors in Burma, and Venezuelan civil society.

Since 2012, USIP’s Colombia Peace Forum has ensured that policymakers and thought leaders in both Colombia and the United States have a sound understanding of Colombia’s internal armed conflict and its peace processes. The forum creates an exchange among participants—including academics, Colombian specialists, and government officials—on an array of peacebuilding topics to foster collaborative, creative analyses that address the challenges of the accord’s implementation.

Generating Trust and Building Confidence with Justice and Security Actors

In collaboration with national Colombian partners, USIP will directly contribute to key elements of the FARC peace accord by building trust between communities and local justice and security providers. The project uses analysis of regional dynamics, public perception surveys, and community-based dialogues to enhance trust in five munincipalities most affected by the conflict.

The Institute builds on prominent youth engagement in the Colombian peace process through its Generation Change Fellows Program (GCFP). GCFP cultivates youth leaders’ capacity to build bridges, contribute to positive social change, and rebuild social fabrics. The program creates cohorts of young peacebuilders who implement peacebuilding strategies and pass on their knowledge, creating an international community of young leaders. In Colombia, USIP works with 26 youth in 15 of Colombia’s 32 departments.

Over the past several years, USIP has supported the exchange between the Congressional Peace Commissions in both Colombia’s lower house and senate. These ad hoc commissions are a space to build consensus through dialogue for advancing fundamental pillars of the peace accord. USIP has supported two delegation visits to Washington to engage in a healthy dialogue on issues related to transitional justice, victims’ rights, and illicit crops. 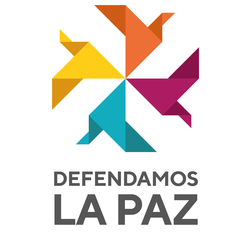 USIP has supported the citizens’ peace movement “Defendamos la Paz,” a broad and diverse multi-sectoral space that defends and advances the implementation of the FARC peace accord. Active through a WhatsApp group, this movement has 32 regional chapters that include political leaders, grassroots activists, and youth and indigenous leaders.

As part of its ambitious “Total Peace” agenda, the new Colombian government recently restarted peace talks with the National Liberation Army (ELN), marking the first new negotiations since January 2019. And while this cycle of talks adopted the same agenda and process framework as the previous efforts, current President Gustavo Petro appointed a diverse and broad negotiations team in the hopes of generating early momentum and support. Petro intends to advance on partial accords as quickly as possible — building up to a comprehensive agreement before his brief four-year term in office is complete.

In the face of rapidly expanding solar and wind energy technology, it’s easy to forget about hydropower. Hydropower was first harnessed to turn mills and grind grain, but today it generates more electricity than any other source of renewable energy. But while dams can spur development, help manage water resources and improve access to affordable electricity, their impacts on local communities and the environment can have a dark side.