The question of whether violent video games cause violence in the real world has been around pretty much since they were introduced. It’s a controversial issue and one that has prompted at least six reports by the U.S. Federal Trade Commission and was the subject of a 2011 Supreme Court decision that struck down a ban on selling them to kids without parental supervision. From policymakers to parents, people are investing resources into investigating how interactive media shapes audiences both psychologically and behaviorally. As it turns out, although most of the worst fears about games creating a more violent society are overblown, they do, like all media, have an impact on the people who use them. In the past decade, designers have begun to harness that impact capability to achieve positivesocial impact, on the idea that games could inspire a new wave of good.

For-profit games such as Zombies, Run! — in which players are cast as a courier in a zombie apocalypse and (literally) run through the game’s story while being tracked by a smartphone app — have incentivized exercise using narrative gameplay. The mobile title Ingress, an augmented reality capture-the-flag game, incentivizes players to exercise and wander on foot around real-world cities as they seek to capture territory within a game. Others have been deployed to train in stress management techniques and preserve the cultural history of the Iñupiat.

For government agencies and NGOs that work to foster peace — many of which already use radio and television to tell stories that inform and shift perspectives — video games are the obvious next step in the fight to reach new audiences and change minds. Part of this drive, and why video games are the next logical step, is a direct result of the rapid proliferation of the Internet, driven in large part by the expansion of inexpensive mobile phones and mobile data coverage, which has helped to expand the global audience of game players. By the end of 2013, an estimated 1.2 billion people played videogames — 44 percent of the world’s Internet population. Of this, 48 percent is female. And quite apart from the large, established game market in North America, Europe, and Asia, the gaming population in some conflict zones around the world is large and growing. Sixty-five percent of mobile Internet users in the Middle East, for example, have downloaded games to their devices. The region’s game industry has the highest compound annual growth rate in the world: 21 percent (a figure triple that of the global rate).

The idea of using video games to effect social change is certainly a logical one — and one to which many people already in the field will be receptive — even if the idea of video games for peace being as popular as ones for pure entertainment like the Call of Duty franchise might be hard to accept. But the world of gaming is expansive, and there are already those in the field putting the model to work.

Take the Foldit project, where developers at the University of Washington abstracted the complex nature of folding proteins into a 3-D puzzle game — one that rewards players for finding a simple way to bend and twist proteins into a desired shape. These developers found that when Foldit players were presented with real scientific challenges, they were able to come up with concrete solutions — sometimes to solve real-world problems. In 2011, Folditplayers helped solve for the structure of a crucial enzyme in the reproduction of HIV. Other video game crowdsourcing efforts on behalf of science include the Massively Multiplayer Online Science (MMOS) initiative “Project Discovery,” which crowdsources the analysis and tagging of millions of scientific images from the Human Protein Atlas through the popular entertainment game, EVE Online. Starting in 2016, a gaming audience of tens of thousands of people will be set to work helping tag and classify millions of images from human cells — and be earning in-game rewards and points as they would for completing any other task in the game.

In the social realm, games have already proved they can be a powerful vehicle for learning. Creators of “edutainment” games (games designed for education) have spent years seeking techniques for teaching players through effective techniques, often with mixed success. As Yale University School of Medicine researcher Lynn E. Fiellin pointed out in Footnote in 2013:

“While the first wave of interactive educational games relied on what some call the ‘chocolate-covered broccoli’ model, where the narrative was interrupted by tedious, poorly constructed tasks that proceeded like homework, the new trend is to integrate learning and fun.”

As this newer generation of the genre has evolved, it has shown that it also has the ability to change attitudes: Role-playing and self-persuasion can have profound and long-lasting effects on attitudes and behavior. In PeaceMaker, an influential social-impact game from 2007, the player acts as the head of state for one side of the Israeli-Palestinian conflict and tries to achieve a peaceful resolution. The player must respond to conflicting pressures from opposing parties and react to shifting political circumstances in order to accomplish this goal. One 2012 study of the title found that the experience had a significant impact on the audience’s perceptions of the parties of the conflict. When 68 participants played as the Palestinian leader, their perceptions of both parties shifted dramatically, causing many to reevaluate, at least in the short term, their opinions of the challenges faced by leaders in this conflict.

It is this element that is the most promising aspect of games for peacebuilders: that cleverly designed games have the potential to shift the way a player reacts to and behaves in the world.

In recent years, a few peacebuilding projects have begun to experiment with the use of games. One organization,Games for Peace, has developed a model for bringing Jewish and Arab youth in Israel together to interact in digital spaces like Minecraft and Team Fortress 2 before having them meet and interact in person. Their method has been replicated with Georgian and Abkhazian youth by the nonprofit organization Elva, which also created an original title Peace Park for players to exercise listening and accommodation skills. A number of peace games, from the Peace Superheroes project to Search for Common Ground’sBattle for Humanity and Cedaria: Blackout, seek to tap into gameplay to shift audience attitudes and incentivize positive social behaviors such as civic engagement, conflict management, and diplomacy. The Syrian conflict has generated examples of interactive journalism, from text narrativesrecounting the struggle faced by Syrian refugees to virtual reality experiencesin which one relives the Syrian regime bombing of Aleppo. These entries are among the first of the field, and they show great promise.

It’s also worth mentioning that the game industry generates extraordinary revenue — which means that peacebuilding projects could become self-funded. Dwarfing the movie industry in scale, the global video game industry is growing rapidly and is projected to reach $110 billion by 2018. The question is: Can organizations manage to combine social impact with marketable fun?

Some projects have already begun to test the possibilities. Take the example of Bandura Games, an Israeli-Palestinian game company that raised more than $42,000 on the crowdfunding platform Indiegogo to launch its premier product, RunZoo. The game will be a collaborative title of a genre that is popular on mobile devices in both Israel and Palestine. The game matches two players online — often from two different sides of the conflict zone — in a struggle to support each others’ escape from captivity. In the end, the player gets a peek into the likes and interests of his or her partner with data pulled from Facebook. Not only does the game bring people who are divided by a conflict zone together in a digital space, it also generates revenue through opt-in ads and in-game purchases, which will sustain development and fuel the team’s next project.

Still, if the peacebuilding community wants to succeed in using games to halt or reduce conflicts, it’s going to be an uphill fight. Peace-gaming initiatives often struggle with a lack of resources — developers, funding, and familiarity with the industry — that are necessary to create a fully engaging, impactful product that achieves broad awareness in its target community. If there’s any hope of a gaming initiative succeeding in building peace, it would need to partner with game designers from the outset of the project and find enough funding to produce a game that could truly hook players. Even then, there’s no guarantee for success.

But despite the potential obstacles and skepticism, the idea of using video games to make peace is worthwhile. Their suggestive reach is already being used to help fuel wars and spur recruitment into fighting forces. Whether it isHezbollah creating games to allow players to digitally participate in the 2006 war with Israel, Islamic State supporters modifying Grand Theft Auto, or even the U.S. military recruiting youth with America’s Army, games are already being employed to allow their audience to participate in a conflict. And if they can be harnessed to serve war, games should and must be used to power peace.

Reposted with permission from ForeignPolicy.com, Source: “Can Your PlayStation Stop a War?" 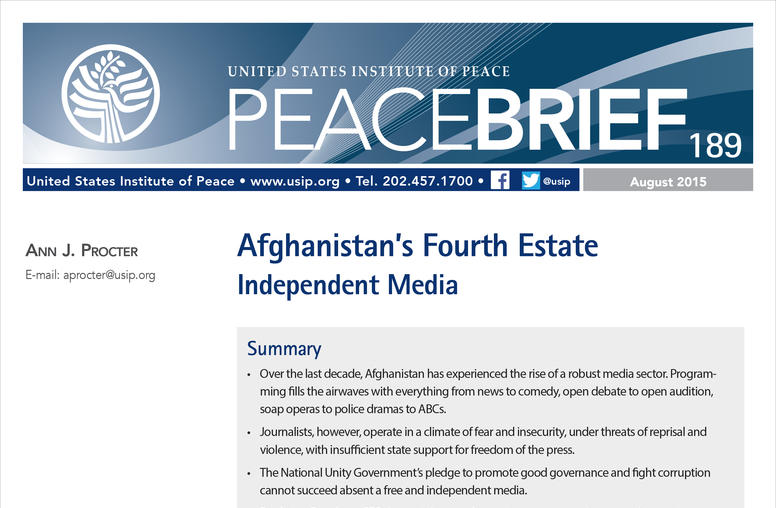 Afghanistan’s media have evolved at warp speed since the fall of the Taliban in 2001, yet being a journalist remains an extremely dangerous occupation, as many have been killed and still more threatened with violence if they persist in their work. The growth of Afghanistan’s democracy depends on a functioning media. This report examines the situation and offers paths forward to making Afghanistan safer for journalism.