“It was really overwhelming in the initial stages,” Deo said during a discussion at the U.S. Institute of Peace with seven of the 10 awardees. Other young women encouraged her to keep going, to not withdraw in the face of the hostility, and to assertively counter the challenges. “It was just the fact that we supported each other” and persevered, ultimately drawing more support to her campaign, from men and women, she said.

Her advocacy for the involvement of women and youth in Fiji’s return to democracy took the form of her “Be the Change” campaign, taking place in a country that has been ruled by a military junta since a bloodless coup in 2006.

“This is the first-ever national election campaign in Fiji that is totally led, strategized and managed by young people,” said Deo. “And this is a very big thing in a patriarchal society like ours.”

Similar tenacity and resilience bolstered the other awardees at the March 5 USIP discussion – a judge from Guatemala who presided over the trial of the country’s former dictator for genocide; Zimbabwe’s most prominent human rights lawyer; an Evangelical Baptist bishop from the former Soviet republic of Georgia; the longtime director of a maternity hospital in Afghanistan; an activist against gender-based violence during the terrorist occupation of northern Mali; and Tajikistan’s first female candidate for president.

A day earlier, they had received their awards from First Lady Michelle Obama at the State Department, marking the eighth year for the recognition, which starts with nominations by U.S. ambassadors worldwide.

“They exemplify women who make a difference,” said Stephenie Foster, senior policy advisor in the State Department’s Office of Global Women’s Issues. The award inspires those who work on women’s issues to “think about doing more ourselves, being better at what we do and making a difference in a very real way.”

“They teach us,” said USIP’s Director of the Center on Gender and Peacebuilding Kathleen Kuehnast, who moderated the discussion. “They teach us that we’re not alone, that together, we inspire one another to stand up for human dignity. Their stories remind us again that most leaders are not born, but instead emerge through and from tough challenges.”

A young woman in the USIP audience told Deo that her story was personally encouraging, and asked about the role of informal support networks in strengthening an activist’s efforts.

“Everybody thinks the owner of political issues is the man, not the woman,” the participant said. “It’s important for every young girl in the world, especially for countries like Afghanistan – we can learn something very special at a very crucial time.”

Solidarity among women has helped Kabul’s 65-year-old Malalai Maternity Hospital thrive, said Courage awardee Dr. Nasrin Oryakhil. She’s been director of the hospital since 2004, and serves as president of the Afghan Family Health Association, which manages a hotline for youth and shelters for women and raises awareness of reproductive health in high schools.

“This is a real women’s empowerment collective in Afghanistan,” Oryakhil said. The staff is 95 percent female. “They are literate, they are professional.” 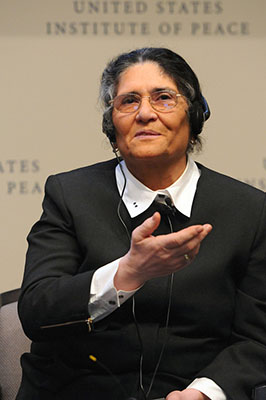 Neighboring Tajikistan is watching closely to see how this year’s election in Afghanistan will affect the region as the U.S.-led coalition military forces prepares to withdraw most, if not all, troops at the end of this year. Tajikistan is concerned about the potential for renewed Taliban violence to spill over the border in the aftermath, said Courage awardee Oinikhol Bobonazarova.

Before being tapped by the only Islamic political party in Central Asia to be its standard bearer, Bobonazarova campaign to stop torture in detention, improve the lot of migrant laborers and increase women’s rights in a country where women are still forced into marriage. In part because Tajik society remains traditional, she got more support from men than from women, she said.

In the former Soviet republic of Georgia, Rusudan Gotsiridze also took on a non-traditional role – a bishop in the small Evangelical Baptist Church. She established interfaith dialogues that have helped protect the rights of religious minorities in predominantly Orthodox Christian Georgia, especially Muslims, and she spoke out in support of lesbian, gay, bisexual and transgender rights.

Human rights have been the focal point of Beatrice Mtetwa’s life as a lawyer in Zimbabwe who has overcome harassment, violence and arrest to advocate for justice and women’s rights for more than 20 years. She also appeared at USIP almost a year ago to discuss an Institute-funded documentary film about her work. She returned this month as one of the recipients of the Women of Courage award.

Mtetwa, asked what strategies she devised to gain support for her work, she said a group of human rights lawyers that she helped start provided strong backing. But otherwise, she mainly just plowed ahead.

“The only way you can do the job is to just face it head on,” Mtetwa said.

Through their activism, many of the awardees have tackled the most entrenched but harmful social norms, especially those that subjugate women or girls.

“In most developing countries, when the going gets tough, the female child is almost always the loser,” Mtetwa said. Zimbabwe once had a very high literacy rate, but that has slipped as the economy tumbled under the three-decade-plus authoritarian presidency of Robert Mugabe, and girls were kept home for various reasons. Even though the country has many female politicians, most got their jobs under the patronage of men and thus feel beholden to them rather than working for the rights of other women and of girls, Mtetwa said.

A dictatorial leader in another part of the world, Guatemala, faced justice before Judge Iris Yassmin Barrios Aguilar. The case against Efraín Ríos Montt amplified the voices of indigenous victims after the country’s nearly four-decade armed conflict and set important legal precedent for genocide prosecutions worldwide, according to the U.S. State Department. Barrios is president of one of the two High Risk Court Tribunals in Guatemala, tackling high-profile corruption, organized crime, drug trafficking and human rights abuses.

“Judge Barrios found Ríos Montt responsible for the death of 1,771 indigenous Ixil in the department of Quiché during his tenure,” USIP Senior Program Officer for Latin America Virginia M. Bouvier wrote on her blog, Colombia Calls. “As might be expected in such a charged trial, the decision was annulled by Guatemala’s Constitutional Court; a new trial is expected in January 2015. Nonetheless, the trial was the first time a national judiciary has tried a former head of state for genocide in his home country.”

The recent conflict in the African country of Mali, in which an offensive led by French forces last year drove Islamist militants from control they’d wrested in the country’s north, generated perhaps the biggest test for Fatimata Toure. She drew on two decades of fighting violence against women to counsel and shelter victims of rape and forced marriage during the war, and publicly denounced perpetrators of gender-based violence.

During the militant occupation of northern Mali, the area was “completely isolated,” Toure said. “We had barely any water, we had no electricity, no food.”

As men often fled, Malian women stayed behind to shelter children, organize a modicum of education for the youth, and confront the militants.

“They shot on the crowd where these women were present,” she said. But the women refused to be cowed, she added, saying they should share in her award.

“We fight on a regular basis for our own emergence,” she said.

President Biden’s announcement that U.S. troops would withdraw by September 11 has many Afghans and observers warning of a quick collapse of the Afghan state and a new phase in the country’s civil war. Without minimizing the challenges ahead, the United States should avoid any self-fulfilling prophecy of imminent collapse by insisting that the only future for Afghanistan is one that advances the gains of the past 20 years. As troops begin to depart, it is an opportune time to examine three forms of leverage the United States has to promote a political settlement.

President Joe Biden formally announced on Wednesday that the United States will withdraw troops from Afghanistan by September 11 of this year, the 20th anniversary of the al-Qaida attacks that led to the U.S. overthrow of the Taliban. The decision comes a month after U.S. Secretary of State Antony Blinken looked to jump-start the moribund intra-Afghan peace talks in Doha, Qatar with a sweeping set of proposals. Although the withdrawal would mean an end to America’s longest war, the implications for Afghanistan’s hard-won progress are immense and many fear the possibility of a rejuvenated civil war after U.S. troops leave.

In February 2020 the U.S. and the Taliban signed an agreement that paved the way for the first direct talks between the Taliban and representatives of the Afghan republic since 2001. This nascent peace process has sparked hope for a political settlement to the four-decade-long conflict, although slow progress and increasing levels of violence threaten to derail the process before it gains momentum.

How is Joe Biden going to deal with North Korea? Why are people worried... - Daily Express