The U.S. Institute of Peace (USIP) has conducted the first in a series of “PeaceTech Camps” in Iraq, an initiative that connects technologists who are skilled at low-cost, easy-to-use technologies with civil society organizations that work on a range of problems within Iraq.

The first of three planned, interactive workshops brought together 60 participants from 45 Iraqi nongovernmental groups with 16 technologists from Iraq, the United States and other countries. It drew representatives from Baghdad regional organizations, though the September 30-October 1 event was held in Erbil in northern Iraq for security reasons. The focus was transparency and accountability, a theme that relates to much of the work these groups undertake.

The basic idea is to provide civil society groups trying to build a more peaceful, democratic and open Iraq with a practical, firsthand opportunity to learn about low-cost technologies they can use to advance their missions. The groups are working on numerous transparency-related issues inside of Iraq: improving education; defending human rights; promoting active public roles for women; protecting independent media and journalists; fostering pan-sectarian Iraqi unity; educating on public health; and conducting humanitarian and relief work, among other goals. 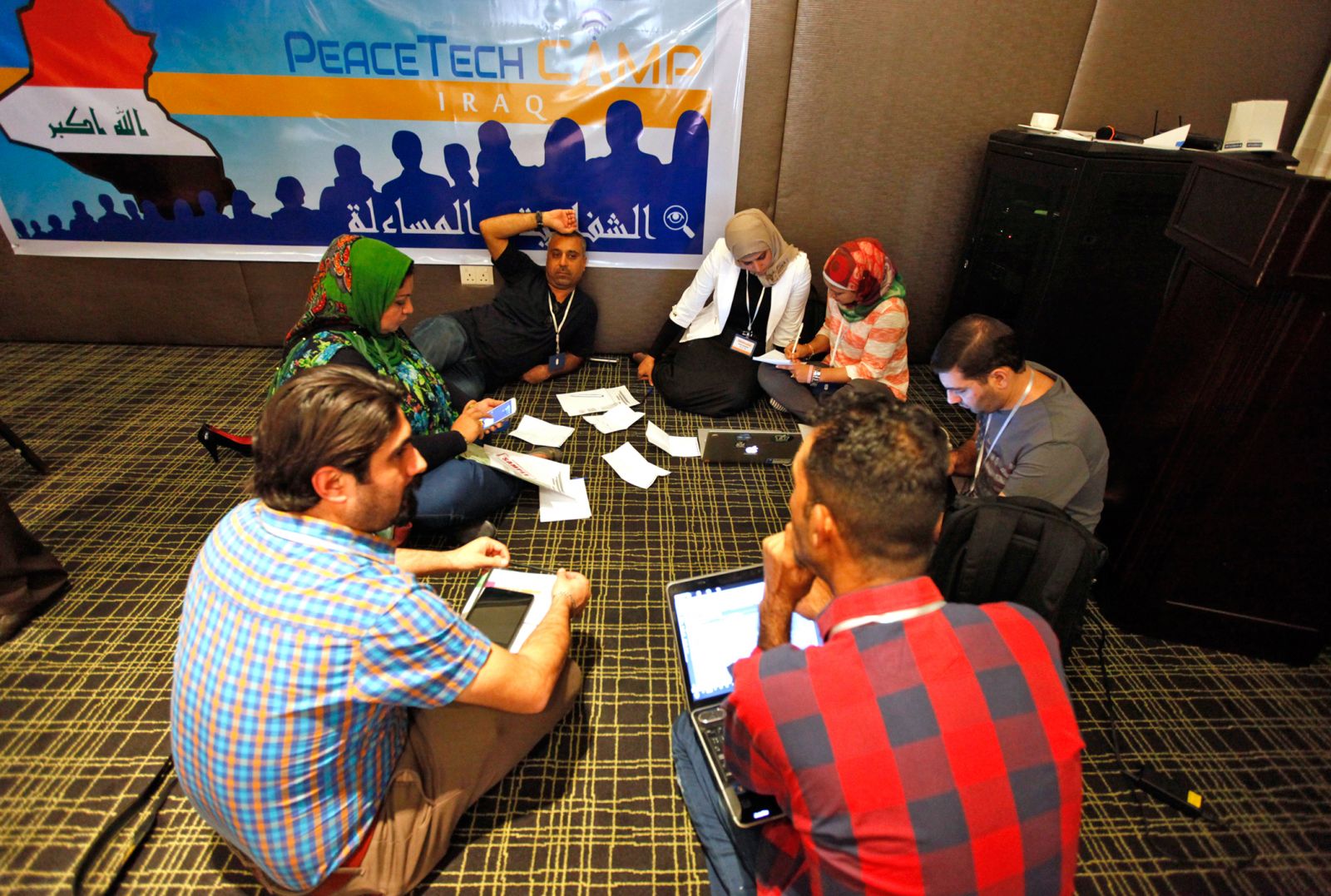 “We are helping the NGOs do what they believe needs doing. We don’t try to define the problems or come up with the answers,” said Noel Dickover, the Institute’s senior program officer who is directing the PeaceTech Camp effort. “We are improving the capacity of Iraq’s civil society organizations so that they can contribute more to peace and stability.”

Dickover previously ran tech camps around the world for the State Department over a two-and-a half-year period. With the broad aim of helping civil society to identify and use tech-based tools that help them further their goals, tech camps were held in Indonesia, Moldova, the Palestinian territories, Tanzania, Bosnia and Herzegovina, Mexico and Cambodia, among other countries. The effort began under then-Secretary of State Hillary Rodham Clinton’s Civil Society 2.0 Policy area, which emphasized the need to harness technologies to strengthen civil society in conflict-torn countries in order to help stabilize their societies.

The Institute is now taking the concept forward with an emphasis on empowering the civilian sector in ways that foster domestic peace and stability. In particular, it is trying to connect parts of the technology community, both local and international, with nongovernmental groups that operate in difficult environments and could benefit from technologies that are inexpensive and easy to implement.

“People don’t generally get into civil society work through their tech savvy. The technologists, for their part, are all about creative technology solutions, and they may not understand rule-of-law concerns, women’s rights and so forth,” said Dickover. “The technologists and civil society in Baghdad, as well as other places in Iraq, have not been connected in any meaningful way.”
The USIP PeaceTech Camps bring the two communities together in ways that immediately delve into practical ideas for expanding NGO capabilities. “We empower peacebuilders and civil society to take action, and in the process we are starting to build up a new ecosystem of sorts—one of tech-for-social-good,” he said.

The Students League for Human Rights and the Al-Murtaqa Iraqi Institution for Human Development, both Baghdad NGOs, wanted to explore ways for schools to be more engaged with parents and students. At the PeaceTech Camp, the group’s representative began to work with FrontlineSMS, an open-source software being used by nongovernmental groups on mobile platforms. With basic mobile technology spread across Iraq’s urban centers—the penetration of older, second generation (2G) in the country is estimated at 83 percent—Sean McDonald, the CEO of for FrontlineSMS, working with local civil society participants in the education area, arrived at the idea of using SMS technology for what they called “School Letters,” a periodic update for parents on their child’s school activities.

The Baghdad-based Journalists Rights Defense Association came to the workshop hoping to find a way to collect and visualize the ongoing pattern of attacks on Iraqi journalists. The attacks deter reporters probing allegations of official malfeasance, crime and other problems. Reporter Ibrahim Alsragey, who directs the Association, met technology trainer Jorge Luis Sierra, a Mexican journalist who has developed online maps of the rampant attacks on journalists in that country. Alsragey was introduced to an interactive mapping tool called Crowdmap, which was developed by Ushahidi, an open-source software project that enables users to collect crisis information via crowd-sourcing. A few weeks after the PeaceTech Camp, Alsragey’s association launched an online map of attacks against Iraqi journalists with a system that allows the group to immediately receive reports of new incidents and assess them for inclusion in the map.

The workshop also proved useful to the Iraqi women’s groups in attendance, including the Ansam Network, the Iraqi Businesswomen Association for Economic Development and the Green Oasis. They worked with Baghdad technologists to think through ways of training and encouraging more women to participate in civil society organizations, using such technologies as Facebook, Skype, blogs and Slideshare.

Getting a chance to learn about the technology options presented at the workshop, said a participant from the Al-Noor Comprehensive Institution, an NGO that works on expanding democratic participation in Iraq, “is very important for communicating with everyone and for developing our organizations.” Another participant predicted that the experience will lead his group to “intensify efforts to use new technologies.”

“For some of these organizations, this is the first time they have ever considered using social media, texting and mapping to expand their capacity,” said Tim Receveur, the Institute’s senior program officer who is overseeing the PeaceTech Camp efforts in Iraq.  “With the rise of 3G mobile and Internet in Iraq, the tools they have learned and the connections they are building will only gain importance over time.”

USIP is planning to run two more PeaceTech Camps in Iraq next year around accountability and transparency issues—one for Erbil-area NGOs and technologists and one for those from Basra in southern Iraq. The Institute is also identifying some of the most promising civil-society technology projects for seed-funding grants of up to $5,000. The grants will help financially strapped NGOs to employ the social media technologies that can make the groups more effective.