Patricia Vasquez is a 2009-2010 Jennings Randolph Senior Fellow and the Latin America Team Leader at Energy Intelligence.  This piece discusses the nature and causes of resource related conflicts in Peru.

Peru’s social conflicts have been growing in tandem with its economy in the past few years. The expansion of the country’s extractive industries, mainly oil and gas, has been at the core of the government’s economic growth strategy. By giving some of the region’s most attractive hydrocarbons investment incentives, Peru has succeeded in attracting dozens of new foreign oil companies, mainly for development in the largely unexplored Amazon jungle.

The Amazon, stretching from north to south along Peru’s eastern border, is home to some 330,000 indigenous peoples belonging to 15 different ethno-linguistic groups that speak some 70 different languages.1   The arrival of oil and gas developments to what they consider their ancestral territories has caused much rejection and is one of the main causes of current social conflicts in Peru.

Of a total of 260 social conflicts reported in January 2010 by the Peruvian ombudsman, almost half –121 cases-- are related to social and environmental problems: 77 resulting from mining activities and 15 from oil and gas developments.

Source: Office of the Ombudsman, Government of Peru.

As part of my research project at USIP, I am currently in Peru, looking at the nature and causes of the hydrocarbons-related conflicts.

My visit is timely.  In late February, indigenous peoples carried out pacific demonstrations in different parts of the country to demand that the government comply with the legal requirement of consulting them before bringing oil and gas projects to their territories.2  The community consultation mechanisms so far adopted by the government have been questionable at best.  They normally take place after the oil development contract has been signed with the company, giving the affected community little room to voice concerns about the new oil activities planned for their territory.

Peru's indigenous population is among the most disadvantaged, lacking basic services such as competitive schooling, electricity, and health coverage.  The remoteness of the largely unexplored Amazon region, where many areas are only accessible by helicopter or after days of walking and boat rides, plus cultural and linguistic differences between the indigenous communities and the Lima-based center of political decision-making, has created a sense of abandonment among this population.

The sudden arrival of oil developments to their territories has caused much distress to their daily lives but little in the way of improvement of their living conditions.  Frustration has been mounting and there are concerns about a repeat of last year's bloody events in the city of Bagua, where 34 people died during violent clashes between indigenous communities and the police.  The seriousness of the Bagua events immediately attracted international attention and the government was forced to withdraw several decrees that had sparked the conflict.  Some of these decrees would have made it easier to carry out oil developments in indigenous lands.

"I feel the tensions is mounting and indigenous populations are empowered after their gains in Bagua... I think we are unfortunately up for more conflict," an official from an environmental nongovernmental organization told me in Lima.

Last week's peaceful demonstrations were in part to demand the withdrawal of some of the remaining government decrees, and to pressure the government to soften accusations against indigenous leaders it claims were responsible for the violent events. Alberto Pizango, the head of the largest national organization representing Amazonian indigenous interests- known as AIDESP-- remains exiled in Nicaragua.

More protests are scheduled for coming weeks. In the northeastern Amazon city of Iquitos, where I interviewed various actors in the oil and gas conflicts, dozens of indigenous leaders are expected to arrive in coming days from different points in the Amazon jungle to organize marches. They will protest against long unfulfilled government commitments. Among these, a promised universal health insurance for their people which was agreed to in 2006 in exchange for allowing oil exploration in their territories.

Private oil companies are partly filling up the gap left by an absent government in the Amazon: they build the much needed hospital or school, and help to facilitate communications and transportation when necessary in these remote villages.  In exchange, companies gain access to oil exploration in the territories of indigenous communities.

But the arrival of oil activities can be traumatic for indigenous communities. In the Northern Amazon, oil exploration since the 1970s has contaminated the Corrientes River and has put at risk the subsistence of the fish, their main sources of protein. When oil companies initiate operations in their territories, indigenous communities are forced to establish a constant relationship with these outsiders and their daily lives are changed forever.

For these communities, Mother Nature has not only been the source of their basic needs for centuries, it is also the core of their identity, which is linked to the geographical area in which they live, and particularly to the river that runs through their territory. Now that the river is contaminated, their subsistence threatened, their culture has been disrupted, and their living standards have not improved.

"My community has electricity now (after the arrival of oil companies) but young people don't want to study any more to improve their chances, they just want to dance and drink... that is not development," an indigenous leader told me. "Nature is eternal, but money is not... Is this development to you?"

Indigenous people feel their lifestyle has been disrupted and their rivers contaminated, but their living standards remain as bad as they have always been. The aid that oil companies bring in helps to temporarily mitigate the hardships of Peru's Amazon population, but it is by no means sustainable, long-term solution to their problems.

Attempts at solving the differences through dialogue after the Bagua events have not gone too far, and the situation is expected to deteriorate in the coming months. 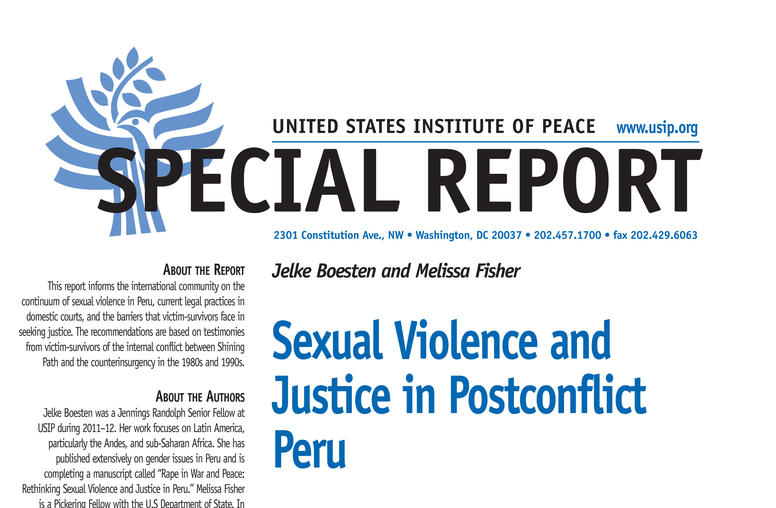