Kelly Ayotte represented New Hampshire in the United States Senate from 2011-2016, where she chaired the Armed Services Subcommittee on Readiness and the Commerce Subcommittee on Aviation Operations.  She also served on the Budget, Homeland Security and Governmental Affairs, Small Business and Entrepreneurship, and Aging Committees.  Senator Ayotte served as the “Sherpa” for Justice Neil Gorsuch, leading the effort to secure his confirmation to the United States Supreme Court.

From 2004-2009, Senator Ayotte served as New Hampshire’s first female Attorney General having been appointed to that position by Republican Governor Craig Benson and reappointed twice by Democratic Governor John Lynch. Prior to that, she served as the Deputy Attorney General, Chief of the Homicide Prosecution Unit and as Legal Counsel to Governor Craig Benson. She began her career as a law clerk to the New Hampshire Supreme Court and as an associate at the McLane Middleton law firm.

Senator Ayotte co-chairs the Commission on Health Security at the Center for Strategic and International Studies.  She is a also a member of the Board of Advisors for the Center on Military and Political Power at the Foundation for Defense of Democracies and the Aspen Institute’s Economic Strategy Group.

Senator Ayotte graduated with honors in 1990 from the Pennsylvania State University and earned a Juris Doctor degree in 1993 from the Villanova University School of Law.  She is a native of New Hampshire and lives in Nashua with her husband, Joe, a retired Air Force combat pilot, and their two children Katherine and Jacob.

General Joe Dunford, Jr. served as the 19th Chairman of the Joint Chiefs of Staff, the nation’s highest-ranking military officer.  In this role, he was the principal military advisor to the President, Secretary of Defense, and National Security Council from 2015 to 2019. General Dunford was commissioned in 1977 and served as an infantry officer at all levels, to include commanding the 5th Marine Regiment during Operation Iraqi Freedom.  His experience leading large organizations included serving as the 36th Commandant of the Marine Corps, the Assistant Commandant of the Marine Corps and Commander of all U.S. and NATO forces in Afghanistan.

General Dunford also served as the Marine Corps Director of Operations, and Marine Corps Deputy Commandant for Plans, Policies and Operations. His Joint assignments included duty as the Executive Assistant to the Vice Chairman of the Joint Chiefs of Staff, Chief of the Global and Multilateral Affairs Division (J-5), and Vice Director for Operations on the Joint Staff (J-3). A native of Boston, Massachusetts, General Dunford graduated from Saint Michael's College.  He also earned master’s degrees in Government from Georgetown University and in International Relations from the Fletcher School of Law and Diplomacy. He currently serves as Chairman of the Board for the Semper Fi Fund & America’s Fund which supports our wounded, ill, and injured active duty personnel and veterans from all services.  He is a Senior Fellow at the Belfer Center for Science and International Affairs, Harvard University. He also serves as a member of the Board of Directors for the Lockheed Martin Corporation and Bessemer Securities.  He is a member the Atlantic Council’s International Advisory Board. 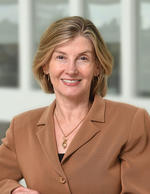 Nancy Lindborg is President and CEO for The David and Lucile Packard Foundation, a position she assumed in August 2020. She is responsible for the overall management of the Foundation and its grantmaking activities. The Foundation awards over $300 million in grants domestically and internationally to improve the lives of children, families, and communities—and restoring and protecting our planet.

She previously served as the president and CEO of the U.S. Institute of Peace (USIP) from February 2015 through August 2020. Created by Congress in 1984 as an independent, nonpartisan, federally funded institute to prevent, mitigate, and resolve violent conflict around the world, USIP links research, policy, training and direct action with partners in conflict-affected areas.

Prior to joining USIP, she served as the assistant administrator for the Bureau for Democracy, Conflict and Humanitarian Assistance (DCHA) at USAID. From 2010 through 2014, Ms. Lindborg directed the efforts of more than 600 team members in nine offices focused on crisis prevention, response, recovery and transition. She also led response teams for some of the biggest challenges the world was facing at the time, including the crisis in Syria, the droughts in the Sahel and the Horn of Africa, the Arab Spring, as well as the Ebola crisis.

Ms. Lindborg has spent most of her career working on issues of transition, democracy and civil society, conflict and humanitarian response. Prior to joining USAID, she was president of Mercy Corps, where she spent 14 years helping to grow the organization into a globally respected organization known for innovative programs in the most challenging environments. She previously lived and worked in Nepal and Central Asia. She was a founding member of the National Committee for North Korea and served as co-chair of the board of the US Global Leadership Coalition.She holds a B.A. and an M.A. in English literature from Stanford University and an M.A. in public administration from the John F. Kennedy School of Government at Harvard University.