Venezuelans elected governors, mayors and local officials November 21 in a vote condemned by many as stacked hopelessly against the opposition or simply fraudulent. An increased turnout over elections last year appears to reflect many Venezuelans’ growing belief that they have gained little with voting boycotts. They believe participation in even a flawed election advances the concept of “re-institutionalization,” which aims to progressively reform the machinery of democracy after years in which it has been undermined by the ruling party. Advocates of this strategy say that restoring democracy must be a long game of incremental advances.

For the first time since 2017, having exhausted strategies that tried to apply maximum pressure against the government of Nicolas Maduro, many in the Venezuelan opposition abandoned their previous boycott and fielded election candidates, hoping to begin recovering democratic spaces at the local level. Some opposition leaders continued to urge non-participation, which helped hold voter turnout to 41.8 percent of those registered. While this figure was lower than the norm for regional elections, it was still higher than the 2020 national assembly elections, which the opposition sat out altogether.

Despite structural advantages that favored ruling party candidates throughout the campaign, a recent poll conducted by Delphos showed that 50 percent of Venezuelans surveyed were interested and willing to vote in the elections, while in another recent poll 77 percent saw elections as the key to change for the country. Venezuelans have become increasingly disenchanted with both the opposition and the ruling party. More than half claim a loyalty to neither side and understand that there are no clear short-term solutions for Venezuela today. Popular support for opposition leader Juan Guaidó has waned considerably, from 63 percent in 2019 to around 15 percent today, according to pollster Datanalisis.

The opposition’s decision to participate came against a backdrop of government tactics that ensured overall control of the outcome while offering some concessions and improvements to the electoral process. As in past contests, the government used its full control over the state media; disqualified parties and stripped them of their symbols to confuse voters and dilute the opposition vote; disallowed some of the most popular candidates from standing for office; harassed and detained opponents; illegally used public funds to campaign for the ruling party; and used the state apparatus to mobilize voters in favor of the government.

Nonetheless, the government offered some concessions as part of an attempt to lower the temperature with domestic critics and the international community. The electoral conditions were nominally better than in previous processes according to the Venezuelan Electoral Observatory, an independent domestic organization that monitored the process. In April 2021, combined efforts pushed by a civil society coalition, Foro Cívico, and some opposition politicians, led to two of the five members of the National Electoral Council being linked to the opposition, the highest since 2005. In addition, the electoral council announced the rehabilitation of the National Unity Roundtable party ticket, allowing the opposition coalition to present a unified list of candidates for the first time since the Maduro government banned it from participating in 2018.

The electoral authority also extended the deadline for candidate’s registration twice, allowing the opposition to finalize and register its list of candidates. Finally, the electoral council invited international organizations and independent experts to monitor the process. For the first time since 2006 an observer mission from the European Union was on the ground, and was joined by a team of experts from the United Nations Secretariat, a technical mission from the Carter Center and a nationwide network of domestic observers.

The opposition coalition won three of the country’s 23 state governorships, down from the five governorships it secured in 2017. The opposition could have achieved more in the gubernatorial races had it been able to unify around a single candidate. In three states the opposition was within two points of the governing United Socialist Party’s candidate and lost only because of a split vote among several candidates. In states where the opposition fielded a single candidate and mobilized constituents the results were favorable. The state of Cojedes, for example, historically in the United Socialist camp, was won by opposition candidate Alberto Galíndez. Cojedes had the highest voter participation nationwide (54.2 percent), supporting the thesis that opposition parties tend to fare better when voter turnout rates are higher in competitive authoritarian elections.

The opposition’s success was pronounced at the mayoral level, where opposition and dissident parties, broadly defined, won 117 contests, up from 26 in 2017. Many opposition leaders see the mayoralties as the place where they can achieve grassroots success in the things that matter to ordinary citizens and begin to rebuild the trust that has been dashed over the past several years of messianic and ill-fated promises of immediate national transformation.

While civil society and participating opposition politicians knew they were fighting an uphill battle, many expressed their effort in terms of “re-institutionalization,” a concept embraced by a growing portion of Venezuelans in the past several years. This approach asserts that the flawed electoral system can be corrected not in a single dramatic act, but rather progressively, in a long process. Given the centrality of elections to the restoration of democracy they want to improve the physical and human infrastructure for voting among other critical government structures. It is noteworthy that most of what the regime did to tip the outcome was done well in advance of the election, not on the day of the vote.

For many in this camp, Sunday’s vote was an important first step toward rebuilding one of several institutions (others include the Supreme Court, and the offices of the attorney general, and the state comptroller) ahead of far more important votes. These will include the expected elections for president in 2024 and the legislature in 2025. Some opposition groups also aspire to mount a presidential recall referendum in 2023. Economist Victor Alvarez commented that in the midst of the losses the opposition nonetheless achieved a partial recovery of confidence in the electoral institution and a return to the electoral path to peace. Electoral expert Eugenio Martinez suggests the opposition should seize the openings and work toward achieving more reforms that could lead to an electoral transition in the country.

While it was a messy process with plenty to criticize, Sunday’s vote nonetheless left much to build upon.

First, opposition groups now have a firm call to unity that could allow for a more balanced, transparent and collegial representation that strengthens rather than weakens them in the long term. New leaderships will emerge among the opposition that could help legitimize any coalition moving forward while reconnecting it with voters in the country.

Second, with a number of municipalities now to govern, opposition mayors can roll up their sleeves and go to work, meeting the needs of people and solving the local problems that most citizens are concerned with. The government will not be helpful in this, but creative solutions in the past have nonetheless led to popularity among many local opposition leaders.

Third, democracy advocates will need to continue to press for institutional reform, which will in turn require a continuation of the currently suspended political negotiations which have taken place in Mexico over the last several months.

Venezuela’s democratic slippage has taken place gradually over the course of the last 22 years, and many believe it is unrealistic to assume it can be turned around with the flip of a switch.  It may be recoverable by a series of small and decisive steps by the many Venezuelans who continue to believe in a peaceful resolution to the country’s crisis.

Ana Caridad is a program officer with USIP.

Despite a “near-total loss of faith in the political process” going into 2022, USIP’s Keith Mines says Venezuelans have not lost hope for a better future — and that underneath the polarization and dissatisfaction, you can “find a vision for the country that is shared by most Venezuelans.” 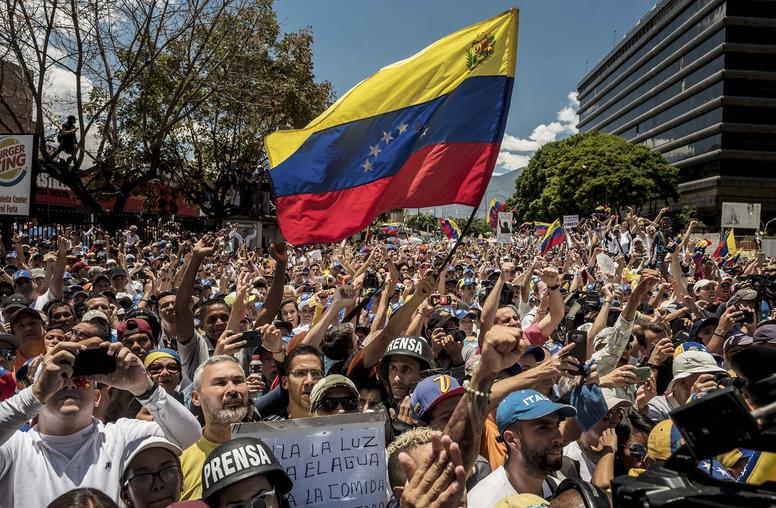 The scale of the Venezuela crisis is unique in recent history, with wartime indicators of hunger, refugees, and human rights abuses but conventional violent conflict largely absent. At the heart of the crisis is a 20-year struggle between the Chavista regime and the democratic opposition, characterized for most of these two decades by each side attempting to eliminate the other from the political map. Negotiations are seen by most outside observers as the only way the conflict will definitively end and there have been consistent efforts to bring the two sides to the table, most recently in Barbados and Oslo in 2019.