When the 26th Conference of Parties of the U.N. Framework Convention on Climate Change closed over the weekend in Glasgow, delegates and observers left with both disappointment that so little had happened and relief that so much had. As the world now weighs the results of the Glasgow climate summit, the global peacebuilding community should do the same. We should analyze where the summit might alter risks of violent conflict and opportunities for the community — including peacebuilding organizations, local civil society groups and policymakers — to respond.

Glasgow yielded a sobering, honest recognition of the injustices of climate change — and that may open opportunities for peacebuilding. The impacts of climate change are agonizingly unfair, with richer countries responsible for the historic build-up of greenhouse gases that cause climate change in the atmosphere, while climate change harms most those who can protect themselves least, including the poorest communities in the world’s fragile states. In addition, our responses to climate change can exacerbate inequities within and between countries. The agreement reached at Glasgow takes a big step in recognizing the world’s need to address these injustices. It elevates the global focus on seeking climate equity, and in particular intergenerational equity.

These are critical tasks that offer natural points of entry for the peacebuilding community to engage in the climate crisis. We must help competing constituencies redress grievances, in particular by ensuring the engagement of vulnerable and disadvantaged populations on climate policy choices that will affect their futures. And we must help reduce tensions among countries that contest their roles around climate change.

While Glasgow resulted in significant new net-zero commitments, it concluded with a push for countries to specify concrete steps that they can take in the next eight years to reduce greenhouse gas emissions. Those steps may include new risks for violent conflicts. In the months before Glasgow, global discussion on climate change was pressing governments to shape long-term plans — often extending several decades into the future — for cutting their emissions of carbon dioxide and other greenhouse gases. But the Glasgow talks closed with an agreement that countries should shift to laying out more immediate plans, which are to be presented at the next climate summit in one year’s time. As nations sharpen their short-term plans for a “greener” economy, some of the steps they choose will trigger new grievances and new hazards of violent conflict. These risks will emerge notably in states that depend heavily on oil production and in countries that have particular mineral resources, such as cobalt, lithium or coal. In many spots, the shift to greener energy sources will trigger new land disputes and conflicts over who benefits and who bears the costs from increased investments in renewable energy.  And they could result in greater geopolitical tensions on a grander stage as countries compete for control of resources.

The peacebuilding community — including international agencies and local civil society in nations at risk for conflict — should wade into these national discussions from the start. They should press every government, as it writes its plan on cutting greenhouse gases, to include concrete steps to increase transparency and accountability around actions as a way to reduce the risk of conflict. Closer to the ground, peacebuilders should plan to engage the local communities most at risk for conflict, particularly with an eye to building the voices and ensuring the inclusion of indigenous peoples and other marginalized groups. And internationally, the peacebuilding community should campaign to ensure that decision-makers see — and counter — the ways that the transition to a global green economy risk exacerbating the problems of fragile states.

Lastly, the Glasgow summit nudged forward a difficult negotiation over steps to compensate countries for losses inflicted by climate change. That negotiation can benefit from peacebuilding efforts. Some countries and communities already face costly climate disasters, and their losses will multiply with longer-term climate changes such as the rise in sea levels, intensified heat that destroys crops, and changes in rainfall that reduce access to clean water for many. The losses already are forcing populations to migrate — a trauma set to explode in scale over the coming 30 years. The Glasgow negotiations failed to persuade wealthier countries to establish a global fund to help compensate poorer, nations more afflicted by the “loss and damage” of climate change – a major disappointment to many countries. But it did advance steps to provide technical assistance to the worst-hit countries, and it set up a follow-on dialogue on the need for compensation and other direct assistance.

Such a dialogue will first require efforts to build trust among its participants, notably between wealthy and poorer states, and will be closely linked to what richer countries can bring to the table in terms of tangible contributions. It also provides an opportunity for the global peacebuilding community to support some of the most challenging discussions of the climate change negotiation process and to translate progress into stronger cooperation in other areas of the negotiations.

The United States used Glasgow to reassert leadership on climate change, with the presence of President Biden, Special Presidential Envoy John Kerry and heads of U.S. agencies. Yet many nations, especially those suffering the deepest losses, are pressing the United States to show concrete actions, and quickly, including a rapid cut in American greenhouse gas emissions. Although the United States came with new commitments, its credibility in the negotiations will need to be fortified with additional efforts to redress climate inequities, notably ensuring that a transition to a global green economy benefits all communities and does not heighten costs to those most vulnerable. The United States also will need to take more steps to promote cooperation on “loss and damage,” in part with further financial commitments that can build credibility and trust. And America needs to actively involve itself in finding solutions for millions of people whose current home regions will be inundated by rising seas or overheated beyond habitability in the next few decades.

The U.S. government needs to urgently prioritize saving Afghan lives, meeting basic human needs and stemming the free-fall of the Afghan economy. The unprecedented evacuation of some 100,000 people from Kabul airport in August demonstrated what clear objectives and a whole-hearted, government-wide focus can accomplish under the worst of conditions. While that scale of mobilization is not required now, a similar unity of effort and focus, this time on financial engineering, will be needed to deliver aid to the Afghan people and limit further economic damage in coming months.

As the climate summit wraps up, USIP’s Tegan Blaine says the focus on net-zero commitments overshadowed immediate concerns such as addressing climate-driven migration: “We needed to commit to these things 10 years ago, 20 years ago … and we didn’t. So now the time is quite short.” 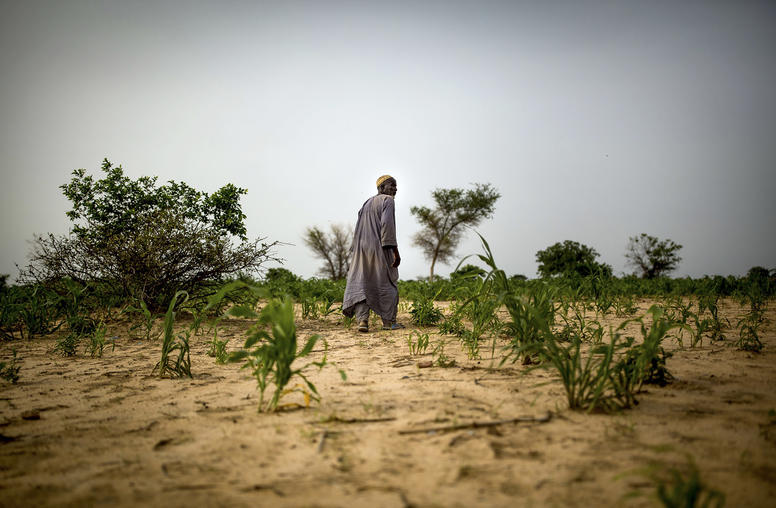 In the run-up to the COP26 summit on climate change, the U.S. government released its Report on the Impact of Climate Change on Migration on October 21 — one of three major climate reports, along with the National Intelligence Estimate and the climate risk analysis by the Department of Defense, from the Biden administration. With these reports, the U.S. government now formally recognizes that climate change is likely to contribute to significant displacement and migration, and with it, political and social instability that jeopardize U.S. interests.