Amid the dizzying acceleration of headlines and debate about the vital global transition to renewable energy, new research shows how that change could destabilize dozens of fragile states that depend heavily on oil exports. The new study underscores that governments and international institutions will need to guard against risks that the shift away from carbon-heavy fuels will inadvertently upset political balances and potentially ignite violent conflicts in a swath of nations from Venezuela to Nigeria to Iraq and beyond. Above all, the research suggests, the world must avoid an unplanned “traumatic decarbonization” of these economies.

The U.S. recommitment to the Paris climate accords — plus summit conferences called by the Biden administration, the G7 nations and NATO — reflect the reality that countries are moving to cut their oil consumption in hope of constraining the planet’s warming. Politicians in the world’s more comfortably developed nations focus on managing this transition to serve their own economies and polities, meeting costs and generating jobs, with an eye toward winning the next election.

Yet fragile states that produce a large share of the world’s oil face a different, more acute problem set. Their leaders, rarely confronted with true electoral challenges, pursue political survival instead by cutting deals among contentious and often violent elite factions. The deals typically involve material benefits linked to the cash from oil exports. When these countries face a sudden cutoff of their cash flow, leaders must either bargain — or battle — for slices of a smaller pie.

A challenge for U.S. and allied policymakers is that a greening of the global economy creates new risks for violence on a global scale. Violent conflict already has been rising for a decade, driven by spikes in civil unrest and again this month resetting the record for human displacement — now 82.4 million people worldwide. And we know already that a transition to renewable and other low-carbon energy sources will risk igniting unintended conflicts around the mining of minerals that will be essential to green technologies. The new research, still being synthesized, suggests that closing the planet’s oil spigot will generate simultaneous new risks in dozens of countries whose collective population will be counted in the billions.

In fragile states, governance institutions are weak. Rather than functioning under the rule of law, politics centers on transactional bargains among rival members of the elite. How the bargains operate varies from country to country. The specific mechanisms may be legal or illegal under national laws. There may be overt corruption, cronyism or structural oligarchies, a combination of all three, or other less detectable tactics. A common feature, however, is that the oil sector is typically controlled, entirely or overwhelmingly, by the members of the elite who hold the levers of state power. No matter the mechanism, oil money is central to elite deals with implications for stability.

The connection between oil prices and peacemaking in oil-dependent countries is visible in data. Since 1990, the new research finds, high oil prices accompany broader, stronger peacemaking processes in such countries. Higher oil revenues in the 2000s funded “big-tent” patronage politics in which rivals have greater incentive to cooperate for a slice of the cash pie. Leaders can spread around oil-derived cash to pay off foes and keep allies loyal. When oil prices slumped in the 2010s, peace agreements became thinner — often merely cease-fire accords. The lack of cash to pay off factions left rival groups more often to chase their goals through unstable, shorter-term deals, or simply by continuing armed conflict, which itself is often part of the bargaining process.

The transition to the global green economy will not simply unleash power struggles over existing resources in oil-pumping fragile states. It also will push those countries’ elites to seek new revenues. The new research suggests that the scrambles for alternate income streams — ranging from legally obtained natural resources to illicit activities — will create further, specific risks. An example: When Sudan lost oil income after the secession of South Sudan, Sudanese leaders found replacement incomes partly by renting their mercenary forces to Middle Eastern states that used them in the wars in Libya and Yemen.

A challenge for policymaking is that leaders in the world’s oil-dependent fragile states will face little or no domestic pressures to plan for the coming changes and risks. Overall, they have done little preparation so far. To the contrary, these countries’ elites have a strong interest in sustaining their cash flow by avoiding a global green economy transition altogether.

What is certain about the coming transition for fragile oil-exporting states is the risk of violence — but not necessarily its eruption. As governments plan a global economic makeover, three considerations are paramount to better understand where and how we can reduce the risk of upsetting delicate political balances that threaten violence.

First, if a successful global transition to a green economy is to be a top policy priority, the parties to the Paris Agreement should develop a strategy for engaging fragile states to support a more stable transition process. That strategy should combine political engagement with economic and multilateral support and trade partnerships. Second, policymakers need to be keenly aware of how political elites in these states are likely to seek to co-opt or divert international support (including climate funds and development aid) for political purposes, and manage this risk with steps to increase transparency and accountability. Third, any strategy to mitigate risk should involve a full range of partnerships, including civil society in fragile states, plus regional and global allies and international organizations.

Evidence From the Field

The dangers from rapid loss of oil revenue — “traumatic decarbonization” — as well as the varied possible outcomes emerge in four case studies within the new research (with studies on Venezuela and Ecuador forthcoming).

South Sudan. From 2005 to 2012, South Sudan’s rival elites bought the loyalty of armed men with oil money. The collapse of those rents in 2013 triggered civil war. The competing factions shifted their patronage system from oil revenues to the distribution of profitable government offices and “licenses.” Some licenses were literal contracts; others were de facto agreements letting armed groups tax, loot and raid the populations under their control. This shift from oil to predation as the revenue source has intensified inequality and misery among South Sudanese while enabling continued domination by the small elite groups. This change may well prove durable as well as brutal.

Sudan. Sudan lost three-quarters of its oil when South Sudan won independence in 2011. As the oil rents withered, the main substitute revenue came from gold mining, which brought in far less money than oil. The decline forced the longtime ruler, President Omar al-Bashir, to cut subsidies for food and commodities that the population had come to expect. Political advantages also switched away from Bashir, who had largely controlled the oil rents, in favor of militias that controlled the gold mines, far from Khartoum. These changes left Bashir particularly vulnerable to dissent — from the top and the bottom — and contributed to his overthrow in 2019.

Nigeria. Nigeria’s oil rents historically provide 65 to 85 percent of government revenue, much of which fuels patronage networks. When COVID-19 and oil market competition dropped prices for Nigeria’s crude by 75 percent last year, the government scrambled for loans to fund an estimated 20 percent gap in the federal budget. Despite President Muhammadu Buhari’s initial calls for austerity measures, budgeted line items increased, suggesting that a substitute for oil-derived patronage funds came from providing payouts from the federal budget. In 2021, new loans are predicted to account for as much as 40 percent of the federal budget. In the longer term, authorities aim to replace oil profits with those from natural gas. Still, evidence suggests that in general, Nigerian elites prefer to cling to the lucrative, immediate profits of the oil business rather than sacrifice those to seek longer-term benefits with other, perhaps less profitable alternatives. Elites are making their choices amid historic levels of public protest, widespread violent turmoil, rising domestic food insecurity and a quickly approaching election season. This leaves open a question about how the elite patronage system will respond to the growing instability.

Iraq. Oil revenues fund 90 percent of Iraq’s government budget. Since 2003, the political system has apportioned oil-funded political positions in a quota system based on sectarian affiliation. The choicest positions (in oil and public works ministries, for example) let office holders use state funds to maintain patronage networks that are linked in complex ways to violent sectarian politics and militia groups. In 2020, the collapse of oil revenues punched a $43 billion hole in the state budget and starved the patronage system of funds. The militias lost funding from the state and political parties, slightly shifting a balance of power in favor of nonviolent civic actors. A public protest movement emerged to demand reforms, yet any real window of opportunity appears to have been brief. When violence erupted, it was not among the armed elites, but targeted at civilian leaders of the reform movement. The civic movement’s relative success led to an implicit consolidation of shared interests among violent forces that have the most to lose from a dismantling of the current system of monetized governance. 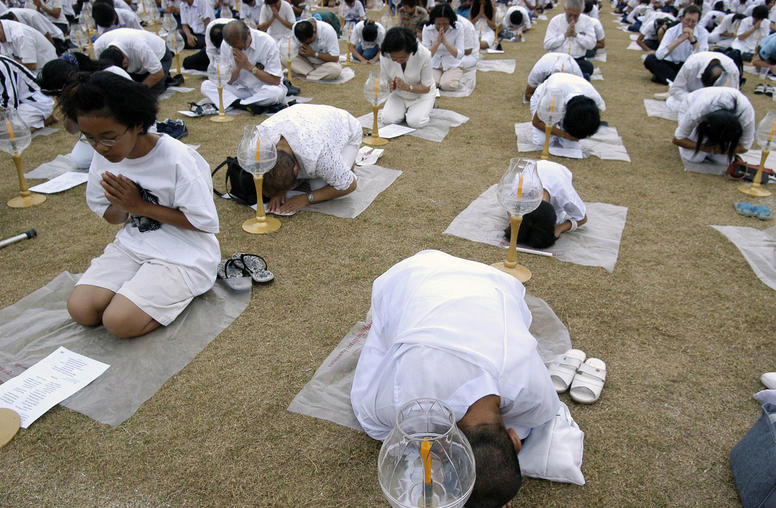