Hassan, 61, took office after the death of President John Magufuli the day before, urging Tanzanians to “bury our differences and be one as a nation.” As a development worker, legislator and then vice president since 2015, Hassan developed a reputation for soft-spoken, consensus-building leadership. Among Tanzanians she earned the nickname “Mama Samia,” partly for her no-nonsense management of turbulent arguments in the country’s parliament. Both her approach and her nickname contrast with those of Magufuli, an often-domineering figure who was dubbed “the Bulldozer.”

As Magufuli pushed economic mega-projects and opposed corruption, his government also oversaw a period of arrests, attacks and harassment directed at political opponents, journalists and dissident artists. That political repression interrupted a long pattern of tolerance by the Chama Cha Mapinduzi (“Party of the Revolution”), which has ruled the country since independence. Hassan’s elevation to the presidency is “an opportunity for the new leadership in Tanzania to take concrete steps to reverse the country’s downward human rights trajectory,” the monitoring group Human Rights Watch said. Hassan built a reputation for conciliation, not least by visiting the country’s most prominent opposition leader in 2017 after he was shot in an assassination attempt he said was meant to silence his opposition to Magufuli. Hassan, who with Magufuli was re-elected in October, is in position to serve a nearly five-year term.

Hassan immediately becomes the most prominent woman leader in East Africa, where Tanzania, Uganda and other countries have suffered election-related violence and seen opposition leaders imprisoned or attacked in recent years. Ethiopia has slid into a civil war that has displaced more than 2 million people.

Hassan’s elevation to the presidency comes as women in Tanzania and East Africa are expanding on their long development of grassroots, civil society leadership. Women’s inclusion in policymaking and peace processes at local and national levels is vital to strengthening and stabilizing nations that face violent upheavals or extremism, research and experience show. Vibrant women’s networks in conflict zones and fragile states are strong allies of U.S. and international efforts to reduce violence.

“Women are largely sidelined and remain invisible in formal peace processes in the east and Horn of Africa – from Ethiopia and Eritrea, Somalia, South Sudan, Kenya and neighboring countries. Having a woman as president of one of our most populous states will strengthen women’s efforts across the region to be accepted as legitimate interlocutors and leaders by the power structures in their countries,” said Fauziya Abdi Ali, who leads Sisters Without Borders, a network of civic women leaders working to promote peace and security in neighboring Kenya.

Sisters Without Borders has expanded its work to Uganda and Tanzania, helping organize and train local women to build similar advocacy networks. Tanzanian women civic leaders are working to change bylaws that restrict women’s rights in their communities and to strengthen women’s roles in preventing communal violence. Sisters Without Borders convened many such leaders with government officials this month in the city of Dar es Salaam to discuss ways to advance those changes, including the development of a national action plan to improve women’s roles in establishing peace and justice. Such plans, pursued by governments worldwide, are the vehicles for implementing a U.N. Security Council Resolution to strengthen global peace by expanding women’s roles.

Hassan will face Tanzania’s longstanding challenges—the geographic and communal divisions between the largely Christian mainland and the mostly Muslim, autonomous island of Zanzibar. As a Muslim Zanzibari, Hassan will be legally required to nominate a Christian from the mainland as her vice president. A vital task will be to restore and strengthen democratic norms that were weakened by political arrests and harassment of opposition figures and journalists under Magufuli—even including four people who reported this month that Magufuli had fallen ill.

COVID remains a largely hidden crisis in Tanzania, as Magufuli declared last year that the country had defeated the pandemic with prayer. The government has not obtained vaccines. As Hassan confronts these problems, it remains unclear whether the ruling party will welcome a change in policies, or whether Hassan will face resistance from Magufuli loyalists if she takes steps to reduce repression, govern more inclusively or shift policies on COVID.

Hassan’s presidency could extend a precedent in Africa of women who have led their countries in times of crisis. After eight years of civil war among armed factions, Liberia turned to a little-known legislator and grandmother, Ruth Perry, as its interim president to help achieve a ceasefire and hold national elections that provided a respite from the war. A decade later the policies of the president and warlord, Charles Taylor, had re-ignited civil warfare. West African peacekeeping forces intervened, and Liberia elected Ellen Johnson Sirleaf—a career international civil servant—as president. Sirleaf served two terms, stabilizing her country, leading it through an Ebola epidemic and sharing the Nobel Peace Prize in 2011.

A national council in the Central African Republic elected Catherine Samba-Panza, a business executive and mayor of the capital, Bangui, to the presidency amid the country’s civil war in 2014. With few resources, Samba-Panza led the country to a national peacebuilding conference and a peaceful 2016 election, and handed her office to an elected successor who has continued to struggle to end the violence. Women have served as head of state in at least five other African countries and have been among the continent’s most effective peacebuilders in civil society. “There are several prominent, distinguished women Nobel Peace Prize laureates” such as Kenya’s Wangari Maathai and Liberia’s Leymah Gbowee, noted Susan Stigant, who directs Africa programs at USIP, “and many others who do not get international recognition for the courageous work that they do each day to advance peace.” 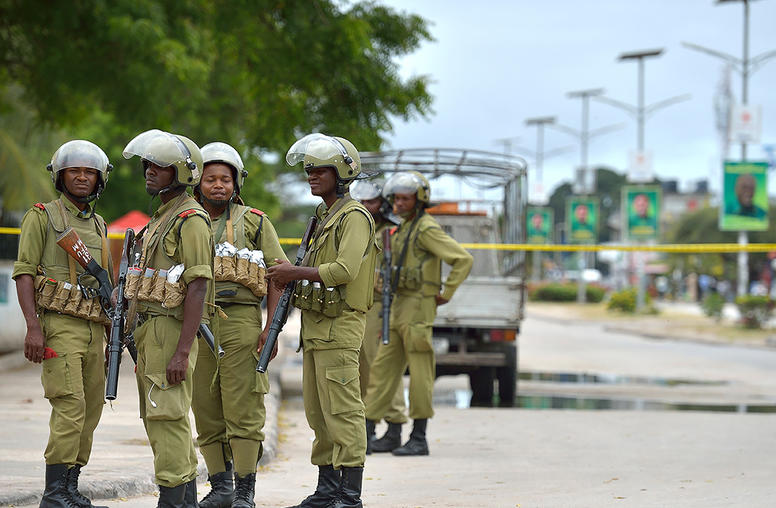 After the 1998 bombing of the U.S. embassies in Dar es Salaam and Nairobi and the increasing presence of al-Shabaab in nearby countries, Tanzania turned to community policing as a way of responding to the threat of violent extremism. But is it having the desired outcome? This new report, based on workshops and interviews with police, community leaders, and others, examines the challenges and potential of community policing in addressing Tanzania’s public safety and security concerns.