In the United States, there is no shortage of public opinion data on nearly every question imaginable. But in Nigeria, Africa’s most populous country, such data is more scarce and policymakers often lack detailed insights into citizen perceptions and concerns. Now, new evidence from USIP-commissioned surveys conducted in May and July 2020 of more than 10,000 Nigerians has found new relationships between violent conflict and the coronavirus response. The data shows that victims of violence are more likely to distrust the Nigerian government’s response to coronavirus.

Those who have experienced violence are also less supportive of measures to mitigate coronavirus, such as the wearing of masks or restrictions on the size of public gatherings, than those without recent experiences of violence. The survey also found that despite the pandemic, economic and security concerns are still of greatest importance to most respondents; that the World Health Organization (WHO) is the most trusted agency to respond to the pandemic; and that opinions of the United States have deteriorated in recent months, while views of China have improved.

High Levels of Concern About COVID-19, But Economic and Security Issues Remain Paramount

Across the surveyed states of Adamawa, Benue, Kaduna, Nasarawa and Plateau, as well as the Federal Capital Territory (FCT), more than 80 percent of respondents are “very concerned” about the COVID-19 pandemic affecting Nigeria. However, this high level of concern has not significantly shifted respondents’ assessment of the most important problems facing the country. Fewer than two percent of respondents rank the coronavirus as Nigeria’s top problem. For most respondents, the top-ranked problems are either security-related, or economic issues, such as unemployment, poverty, and low wages, or systemic concerns about the management of the national economy and corruption. Therefore, as important as containing COVID-19 might be, addressing the disease without considering the community’s other priorities will not respond to the needs and demands of many Nigerian citizens.

Most Respondents Report Experiencing Insecurity in the Last 12 Months

National-level surveys have previously shown that as many as one-third of Nigerians have been victims of crime or violence. With the USIP-commissioned surveys’ focus on areas of the country known to have greater problems of insecurity, it is not surprising that higher levels of violence were reported. Still, as Chart 1 shows, the results are sobering: roughly six in 10 respondents across the surveyed states reported that they had experienced insecurity or violence in the last 12 months. Interestingly, male respondents were more likely than female respondents to report a distressing experience. While the survey cannot offer a definitive explanation for this variation, it might be that men are more willing to disclose such experiences compared to women. 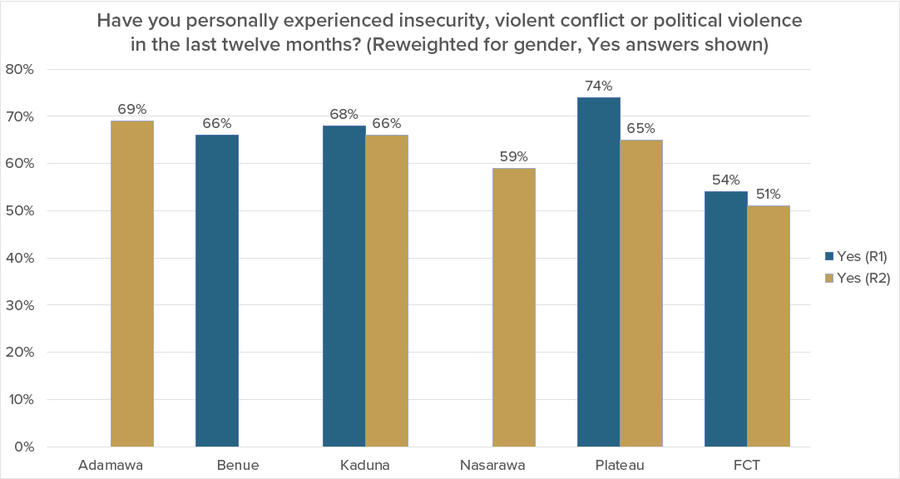 At first glance, criminality and internal conflicts might seem to be entirely unrelated to tackling the coronavirus. This data suggests otherwise, and implies that reducing insecurity would improve the confidence people feel in the government’s response in other areas, such as with regard to COVID-19, and, extrapolating further, to potential future public health challenges.

Of the many national and international actors responding to COVID-19, respondents in this survey express greatest confidence in the WHO. As Chart 2 shows, levels of confidence in the WHO remained consistent through both rounds of the survey. The Ministry of Health is, on average, the second most trusted actor, followed by international NGOs. State governors and the federal government are less trusted, although many respondents were positive about the government’s COVID response. Since citizen trust is crucial to any public health response, for international actors, supporting national institutions may be insufficient if the response to COVID-19 is to be most effective. Whatever the international controversies about the WHO may be, for ordinary Nigerians, it is a trusted voice. 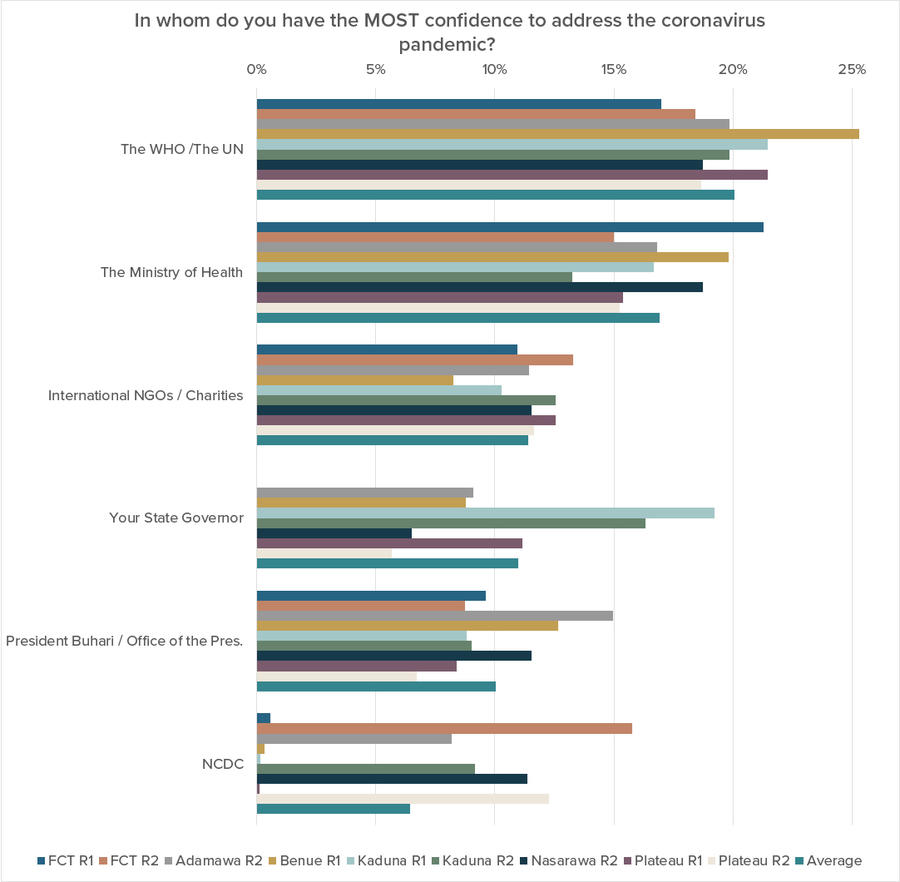 Strong Support for Most Public Health Measures To Confront COVID-19

From the mandatory wearing of masks to restricting the size of both secular and religious gatherings to limitations on domestic and international travel, respondents are supportive of many measures to mitigate COVID-19. Such support also extends to lockdowns, although this measure is the most weakly supported of the seven measures listed in the survey. Despite this general tendency of support, however, there are discernible differences by age, gender, and experience of insecurity in the strength of support for all measures. Again, those with a recent experience of insecurity support public health measures less strongly. Women of all ages, and men and women 31 and older, are more likely to support restrictions. Support from those under 30, and men, is somewhat weaker. Given the youthfulness of Nigeria, with a median age of just 18, the implications are clear: more needs to be done among young people to gain their confidence in public health measures and physical distancing restrictions, if they are to be effective.

Positive Opinions of the United States Have Declined During the Pandemic

Respondents were asked to indicate how their views of certain countries had changed during the coronavirus pandemic, including the United States, China, and fellow West African countries like Senegal and Ghana, the latter of which are widely perceived to have mounted effective responses to the pandemic. Respondents could indicate that their impressions of these countries had improved, stayed the same, or worsened. As Chart 3 shows, in three out of five locations, in net terms, America’s standing among Nigerian respondents has meaningfully declined since the pandemic began, and improved in only one state, Nasarawa (this question was not asked in Benue state). By contrast, in three out of five locations, China is now seen much more favorably, and in the two other locations, net opinion is either unchanged or has declined insignificantly. 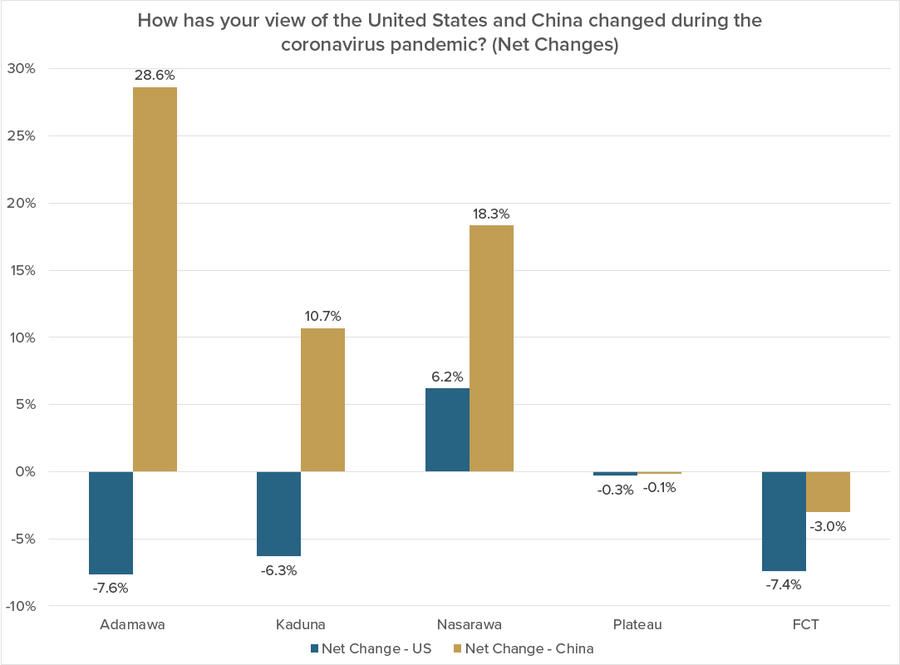 Notes: This survey was conducted online from May 8-20 in Benue, Kaduna, and Plateau states, and the FCT (round one, R1) and July 14-28 in Adamawa, Kaduna, Nasarawa and Plateau states, and the FCT (round two, R2), due to restrictions on in-person data collection as a result of the pandemic. As surveying was limited to these six locations, the data is not nationally representative of all of Nigeria, and caution should be taken in extrapolating the findings to non-surveyed areas. As an opt-in, non-random online sampling exercise, the calculation of survey confidence intervals cannot be made, although statistically significant numbers of responses were received from all areas. In order to address the limitations of an online survey exercise and ensure data reliability, three main techniques were used. First, the survey was repeated in three locations to ensure that key trends observed in the first round could be identified again. Second, some survey questions were benchmarked against Afrobarometer’s 2015 and 2017 nationally representative survey data. Strong correlations were achieved between the benchmarked questions. Third, efforts were made to ensure the survey sample would be as large and as varied as possible, with a total of 10,149 complete responses received. Where possible, further partial survey responses were also included for analysis. Data presented here has been reweighted for gender, on the assumption that the population is evenly divided between men and women; further reweighting is precluded by an absence of accepted demographic data across Nigeria.