Nadia Murad, the sad-eyed, soft-spoken Nobel laureate and voice of the Yazidi genocide, warned that her people along with Christians and other minorities are slowly disappearing from Iraq. Faced with challenges that include uncertain security, lack of health care, stalled reconstruction and inability to leave refugee camps, Yazidis and other minority groups urgently need international help if they are to survive as components of Iraq’s national character, she said.

Murad, who escaped from captivity as an Islamic State sex slave and lost nine male siblings in massacres by its gunmen, said many Yazidi families—including her own—are still facing up to what happened in 2014 when the terrorist group swept into their area. Two of her nephews and a sister-in-law remain missing and her brothers’ bodies are yet to be recovered, she said.

“Despite it all, the community is resilient,” Murad said through an interpreter at a U.S. Institute of Peace event last week. “It is fighting to face its challenges and seeking to recover from the genocide it experienced.”

Besides publicity efforts, Murad’s contribution to that project comes from raising funds for Nadia’s Initiative, which supports existing organizations working to rebuild Yazidi communities. Murad, who shared a Nobel Peace Prize in 2018 for efforts to end the use of sexual violence as a weapon in armed conflict, presented a certificate of appreciation to the government of Taiwan during the event, which was co-hosted by the Taipei Economic and Cultural Representative Office, for the $500,000 donation they made to Nadia’s Initiative.

Murad, now in her mid-20s, was also named as a United Nations Goodwill Ambassador in 2016. In October 2017, she published The Last Girl: My Story of Captivity, and My Fight Against the Islamic State, the book that won her international attention.

‘Voice for Her People’

“Nadia has used her story to tell the story of her people,” said Kelley E. Currie, the chief of the State Department’s Office of Criminal Justice, who met the human rights activist while working on ISIS issues with former U.N. Ambassador Nikki Haley. “Yet she is not just a voice for her people; she speaks for all people who are survivors of atrocities.”

The crisis is not over as long as Yazidi families are searching for thousands of missing women and children, said Knox Thames, a State Department special adviser on religious minorities who introduced Murad.

The shared goal of Murad and the U.S. government is to hold accountable the perpetrators of crimes, Currie and Knox said. Currie noted that the U.S. made a $2 million contribution to a U.N. effort to investigate ISIS atrocities and Congress had appropriated $5 million for grants to promote accountability in Iraq.

USIP and its Iraqi partners have supported ethnic and religious minority communities in Iraq for almost a decade, and this work is clearly not done, said USIP’s director of Middle East programs, Sarhang Hamasaeed. He urged those watching Murad to stay engaged with the issue of the Yazidis (or Ezidis, as he said the group’s members call themselves) and with helping survivors of the genocide.

“If we want to make ‘never again’ a reality, we have to keep at it, especially now as attention shifts to tensions with Iran and other geopolitical challenges,” he said.

While Murad expressed gratitude for the international assistance the Yazidis have received, she made clear her frustration with the pace of efforts to restore the group’s depleted communities.

Population figures are uncertain; perhaps 500,000 Yazidis fled the Islamic state. About 350,000 remain in refugee camps located no more than a few hours’ drive from their former homes, she said, and 80,000 have returned to their villages. But as word filters back that the returnees aren’t getting the support they need, particularly in terms of security, few are joining them, she said.

“A whole generation will grow up without proper health care or education,” she warned.

Meanwhile, some 95,000 Yazidis have emigrated from the region, primarily to Europe.

The Need for International Aid

Murad cited what she called “some positive progress” with France in demining areas formerly occupied by ISIS. She also cited the French, U.S., and British government contributions to the United Nations Investigative Team to Promote Accountability for Crimes Committed by Da’esh/ISIL, which has organized evidence-gathering at mass graves.

The most pressing issue is security, Murad said. While most of Iraq suffers from a lack of security, the problem is far greater in Sinjar, a district in the Nineveh province that was the heartland of the Yazidi population, she said.

According to reports from the area, Yazidis are afraid of ISIS militants who have gone underground and of neighboring Sunni villages where the terrorists found collaborators. The Iraqi government in Baghdad and the Kurdistan Regional Government have not provided a solution; Yazidis have pressed the government—so far to no avail—to recruit them as well as Christians and other minorities for local security services, Murad said. Meanwhile, Yazidi armed groups are guarding mass grave sites to protect evidence against the Islamic State. Some of them never left Sinjar, but rather stayed to resist ISIS after the 2014 occupation, she said.

“Our goal has been to shift the focus to Sinjar,” Murad said. “We have worked with both governments for the past two years, but so far not managed to establish a local government. The issue of security and local governance presents a big obstacle.”

Murad said she holds out some hope that a foreign ministers meeting in July of nations in the Global Coalition to Defeat ISIS will yield further help.

“We spoke last year at the ministerial meeting and had some good discussions, but this year we hope for urgent steps, swift action,” she said. “It has been five years already. If this goes on much longer our minorities will just disappear.”

In her interview with Hamasaeed, Murad commented on a number of other issues.

On the U.S., Iraqi and KRG governments’ role in returning women and children taken by ISIS: “We have partners, including the U.S., who provided information. But to be honest, there has been no initiative or program to rescue Yazidi women. After Mosul was liberated, we knew for sure about captured Yazidi children who were still with families. We asked the government to let us appoint volunteers to go look for the children in coordination with the Iraqi government. So far, we haven’t gotten permission. “

On the best way to hold ISIS militants from Europe accountable for their crimes: “We have been working with the U.K., Germany and France on ISIS fighters, including women, who committed crimes. The lawyer Amal Clooney is helping with this. We have a case in court in Germany against a couple who killed a Yazidi child. The hope of the Yazidi community is to see ISIS fighters in court. We are ready to testify.”

On how children born of sexual slavery are viewed by the Yazidi community: “Well, this was something new for a small religious community that’s thousands of years old. But the Yazidi spiritual leaders welcomed back all the enslaved women and their children. There has been discussion by the Iraq government about children born of rape, but this is not just a Yazidi issue. Even a child of ISIS rape has to be registered as a Muslim by the father, not according to the mother, and it is very difficult for the Yazidi families to have these children in their households. This is something we’ve been working with religious leaders to figure out.”

Home to Iraq’s beleaguered Yazidi (Ezidi) community, Sinjar has long been caught amid tension between Iraq’s federal government and the Kurdistan Regional Government (KRG), leading to severe underdevelopment in the district. Compounding Sinjar’s historical struggles, the district also witnessed the Islamic State group’s (ISIS) egregious crimes against the Yazidis. In October 2020, the Iraqi government and KRG announced an agreement on Sinjar that attempts to resolve two pressing factors undermining its stability: the multiplicity of security actors and the existence of two rival administrations for the district, one that is unofficial and backed by the PMF and the other that is official and pro-KRG. As implementation of the deal lags, it’s important to consider how Sinjar’s residents perceive the agreement’s ability to address the district’s security and governance challenges. 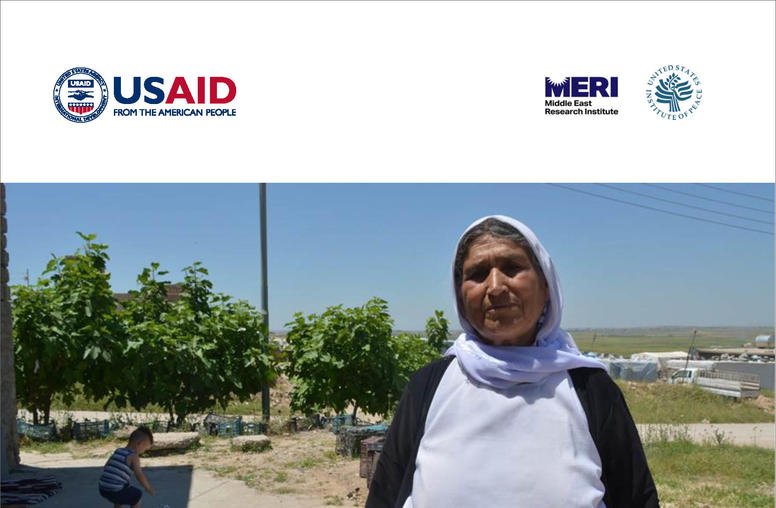 The aim of this report is to map previous and current initiatives undertaken by local, provincial and national governments, civil society organizations, international NGOs and other actors to address barriers to stabilization and the return of displaced persons from Ninewa governorate, particularly Ninewa Plains and Western Ninewa. The report also identifies shortcomings, failures and gaps that constrain return processes and long-term stabilization.