For over a decade, Russia’s Vladimir Putin has campaigned to subvert the liberal world order and undermine global norms by invading neighbors and interfering in democratic processes at home and abroad. From cyberattacks to its support for the Assad regime in Syria, there can be no doubt that Moscow is seeking to revive great power competition. In Europe, Russia has invaded and annexed territory in Georgia and Ukraine and meddled in elections with social media propaganda campaigns that seek to exploit rising nationalist sentiment. To explain how Congress can counter Russian aggression, members of the House Foreign Affairs Subcommittee on Europe, Eurasia and Emerging Threats Rep. Francis Rooney (R-FL) and Rep. Bill Keating (D-MA) came together for a bipartisan dialogue at the U.S. Institute of Peace.

Both members noted that without strong leadership from an allied West in response to Russian interference, the postwar order is in jeopardy, and progress made over the last 70 years is at risk of being reversed. The United States must continue to lead on global issues, support democracy, uphold the rule of law, and push back on the disruptive ambitions of a revisionist Russia.

The Return of Great Power Competition

While Russia's geopolitical might is dramatically weaker than during the height of the Cold War, it has been able to exert influence throughout Europe—even with a weak economy. "Russia would be very pleased that we're talking about Russia today," said Rooney, adding "They're sort of a welterweight punching above their weight class … the more they are getting any international respect, it helps them domestically at home where they have some difficulties, but it also increases their ability to take advantage of chaos in the world." Through relatively cheap investments in cyber programs, Moscow has been able to successfully wage propaganda campaigns across Europe. "Their [Russia] cyberattacks, their cyber program does not cost them much, relatively speaking, for the effectiveness that they've gotten out of it. And the way they're using it against the West, against the U.S., is something we have to deal with," noted Keating.

Even with heightened geopolitical competition between the U.S. and Russia, Washington can best counter Moscow's disruptive ambitions through diplomacy, only looking to military solutions as a last resort. "I think a lot of people in our country view many of these things too much through a military prism … However, Secretary [of Defense James] Mattis, when he was addressing a small group of us recently, said he views his role as a reinforcement," said Keating, adding, "He said our military is there to reinforce our position, to bolster our State Department and our diplomatic efforts … Our military is there to reinforce that, and to create barriers to conduct that we cannot deal with diplomatically."

Defending Democracy: What can the U.S. do?

Both Rooney and Keating argued for a robust U.S. response by primarily deploying a soft power approach. By using diplomacy and economics, the U.S. can better position itself and its allies to withstand Russian efforts to subvert democratic processes. "To counter Russia, we ought to be doing the same thing to them that they're doing to us," said Rooney. "And I think we need to promote democracy shamelessly as the better way with our new neighbors in Eastern Europe and deploy people like USIP and the Board of Broadcasting Governors."

As the global refugee crisis began to dramatically impact Europe in recent years, Russia has waged propaganda campaigns through social media to exploit anti-immigrant, nationalist sentiment. "They certainly exploited the migrant issue in Italy, and Germany, and everywhere else," said Rooney. "We definitely need to bring visibility to that and support the countries that seem to try to solve it in a humane manner."

Ultimately, the best counter is to show the power of the American democratic model. "We do have the ability to exert enormous influence for democracy, for rising levels of living, and we should be a model," said Keating.

Rooney and Keating both emphasized the importance of close collaboration with European allies. Rooney argued that for sanctions to have "teeth," the U.S. would need to rally the support of Europe behind the sanctions regime, despite Europe's dependence on Russian energy. "We've got a lot of complicated issues, but they all come down to getting alternate energy that's not Russian into Europe and giving them the confidence that they can go it alone," said Rooney.

For his part, Keating advocated for a revival of the Transatlantic Trade and Investment Partnership, or T-TIP, to strengthen the U.S.-European economic relationship: "Instead of playing defense all the time, we really have the opportunity, if we can work together, for a free trade agreement with the European Union … and then we're dealing from strength."

"If you look back through history, most of our foreign policy successes have been bipartisan," said Rooney. "It's reassuring in this day and age with what you hear about Congress, that by far and away the Foreign Affairs Committee is the most bipartisan in the House—and that's not by accident, we actually work at it because we realize the enormous impact of what we do around the world," added Keating.

USIP's Bipartisan Congressional Dialogues will continue to bring together leaders from both political parties to address urgent national security and foreign policy challenges.

A crucial deadline that will determine the future of humanitarian aid to Syria looms this week, as the authorization for the Bab al-Hawa crossing on the Turkey-Syria border expires on July 10. The crossing is the last with a U.N. mandate allowing aid to be delivered directly, without having to first go through the Assad regime in Damascus. While Washington has been insistent that the crossing should remain open, with a senior official calling it a matter of “life and death,” Moscow has said the cross-border aid undermines Syria’s sovereignty. Russia has used its veto power in the Security Council to prevent extensions of three other such aid crossings.

Despite numerous points of tension, Presidents Biden and Putin characterized this week’s meeting in positive terms. Now, “the administration is trying to decide to what extent to cooperate with the Kremlin … and to what extent to push back,” said USIP’s Donald Jensen ahead of the summit. 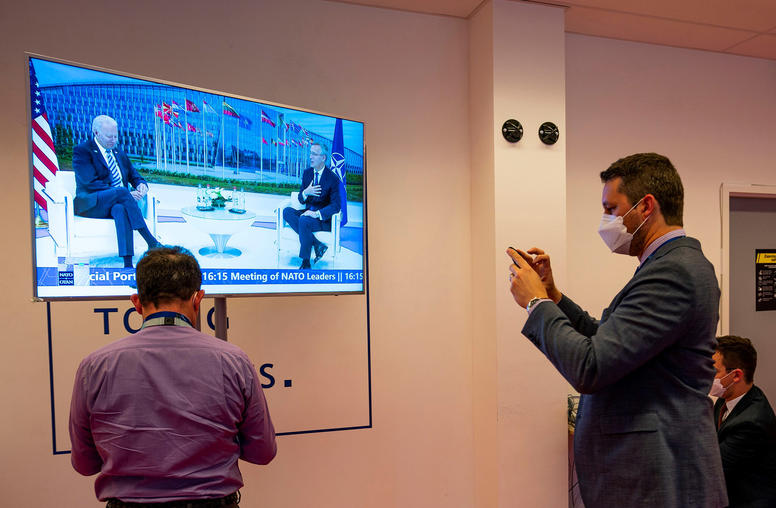 While Presidents Biden and Putin meet amid the strained U.S.-Russian relations in a generation, this week’s summit could yield moves to rebuild predictability in that relationship, especially new steps to address rising global risks to stability and security. Even as the United States confronts Putin over his wielding of selective chaos as a foreign policy crowbar, both sides share an interest in managing disparate international threats—from the weakening of the limits on nuclear weapons and the emergence of new high technology weapons, to climate change and COVID. The summit could reopen dialogue on such challenges.