The Poetry of War and Peace

After nearly two years of relative stability in the Central African Republic (CAR), new violence erupted in April and threatens renewed factional warfare. This latest upheaval was triggered when U.N. peacekeeping forces tried to disarm a local group in the main Muslim enclave of Bangui, the capital. The renewed violence in CAR reflects the need for a consistent engagement by the international community to sustain a peacebuilding process in the country. Governments and international organizations too often have focused on the country sporadically, in short-term reactions to crises that offer only temporary solutions.

On April 8, troops of the United Nations mission, called MINUSCA, moved into the Bangui neighborhood known as PK5. The U.N. says they were responding to requests from community members seeking the disarmament of a local armed gang that styled itself as a Muslim self-defense group. The group actually was committing extortion and other crimes against residents, MINUSCA has said.

As the troops confiscated weapons and drugs from gang members, panic spread through the enclave over rumors that MINUSCA was planning to seize all arms from the Muslim community. Residents feared that such a move would leave their area defenseless in a country that lacks police and security institutions and has seen attacks on Muslims, notably in a murderous deadly campaign of “ethnic cleansing” in 2014.

Fighting erupted for several days between the U.N. troops and armed men in PK5. At least 30 people, including one U.N. soldier, were reported killed. On April 12, PK5 residents carried the bodies of 16 Muslim residents to MINUSCA headquarters and accused the U.N. force of killing civilians. The United Nations’ global director for peacekeeping, Jean-Pierre Lacroix, flew to Bangui and said civilians indeed had died, but only because they “were armed by the irresponsible criminal gang leaders ... who confronted the Central African armed forces and MINUSCA.”

The fighting spread beyond PK5, following the fault lines of factional battles that have ravaged much of CAR for more than a decade. As in many countries, this violent conflict is fundamentally political—a struggle over power and control of the nation’s resources—but factional leaders have sought supporters by inflaming divisions over people’s religious and ethnic identities.

A mainly Muslim armed group, the Séléka, seized power in 2013 but soon was weakened by interventions of French and African Union forces. The domestic balance of power shifted in favor of predominantly Christian and animist armed groups known as the Anti-Balaka. In 2014, the Anti-Balaka forces began systematically murdering Muslims in a campaign to drive out groups whom they called “foreigners.” Christians form CAR’s largest religious group while Muslims are estimated to be as little as 10 percent of the population.

CAR held a nationwide dialogue at a conference called the Bangui National Forum in 2015. That same year, an internationally supported process achieved an agreement to demobilize armed factions in the country. But three years later, the armed groups remain active and control as much as three-quarters of the country’s territory. And new groups—including the gang targeted in PK5—have emerged since then.

In the weeks after the battle at PK5, gunmen attacked a Roman Catholic church during religious services, killing at least 16 people, including a priest whose congregants carried his body in protest to the offices of the President Faustin-Archange Touadera. Rioters attacked Muslims and burned a mosque in retaliation.

Muslim leaders of ex-Séléka armed factions met in a northern town, Kaga Bandoro, and threatened to attack Bangui. The U.N. force strengthened its positions at key road junctions to protect Bangui—and reported in May that it had blocked a group of fighters moving toward the capital.

The U.N. disarmament effort against a local armed group involved in crime inadvertently—but perhaps predictably—triggered deep fears in Bangui’s Muslim enclave. While the U.N. force had met with PK5 community member who had sought its intervention, MINUSCA failed to communicate its objectives clearly or widely enough to prevent a panic.

To many residents, it appeared that Muslims were again being singled out and persecuted. In their eyes, why disarm groups in the capital’s only Muslim neighborhood when Anti-Balaka forces, which have attacked Muslims, still can mobilize quickly in the city?

The new violence since April accompanies a new layer of uncertainty in CAR’s long conflict—the arrival of Russian weapons and security advisers for the government.

Russians have taken a visible role as part of President Touadera’s personal bodyguard, Bangui residents have noted. Russia’s new security role is “part of the common efforts of the international community to strengthen the national security units of the CAR,” Kozhin said.

As Touadera seeks to build his government’s security forces, CAR’s armed factions see Russia’s support as an incipient threat to their efforts to hold territory and influence.

Rachel Sullivan is a senior program assistant at USIP in Washington. Igor Acko is a program specialist and Irene Turner the country officer for USIP in Bangui. 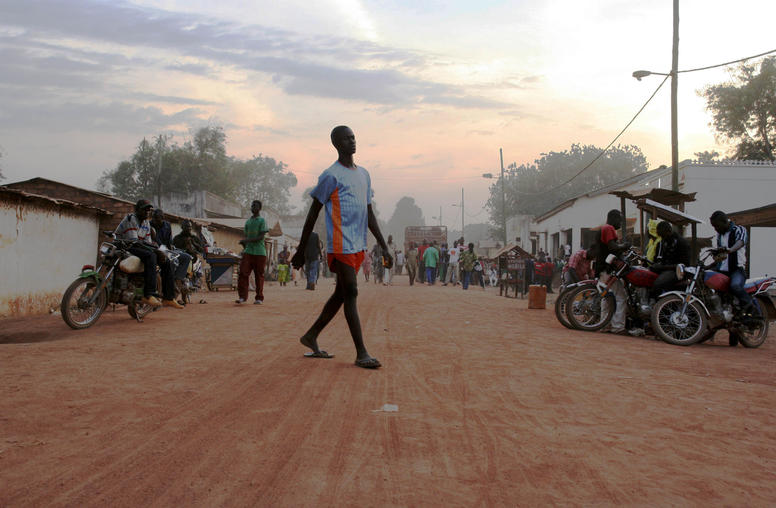