To hear voices of peace challenged by a surge of violence, simply listen to a conference call held by Arab and Jewish parents in Jerusalem who are involved in the program Kids4Peace. The bonds formed over the years their children attended the group’s dialogues and camps are at once strained and sturdy, resolute and despairing and frayed by fear. For the program’s staff, one posted message reflects their defiance at this moment in the Arab-Israeli conflict: “We will not be defeated. Nothing is cancelled.”

Over 12 years, Kids4Peace, a U.S.-based nonprofit, has brought together more than 1,100 school-age youths—Jews, along with Muslim and Christian Arabs—in Jerusalem and at international summer camps to support them in “embodying a culture of peace and empowering a movement for change.”

The kids engage in dialogue, trust-building workshops, games and joint projects aimed at bridging the often-violent chasm that separates them in Israel and the Palestinian Territories. Parents must also commit to the program when their children join, creating a sustained, family engagement that project leaders say is key to creating a sense of community; 80 percent stick with the program through all six years.

The work is never easy and the opposing narratives of the students’ backgrounds leave them without a firm base to even begin a dialogue, said Father Josh Thomas, an Episcopal priest who leads the organization. But as children from families that are at least motivated to reach out to the other side, they make friends, learn about each other’s religions and, by the end, are pushed to see themselves as something bigger than just an intercultural youth group: they are trained to become a community of peacebuilding leaders. A U.S. Institute of Peace grant is helping the group evaluate the potential of that process to have long-term impact.

The latest violence in Jerusalem is testing the resilience of the organization and its participating families in new ways, Thomas said. The one-on-one nature of knife attacks on soldiers, police and civilians, as well as the response from Israeli police and defense forces in Jerusalem and the West Bank, have deepened fear and suspicion on both sides beyond what the group faced—and overcame—during the last Gaza war in 2014.

On the conference call, set up in mid-October by Kids4Peace facilitators to discuss the personal effects of the current violence, parents talked about their feelings during the tense time and how to help their children through it. The conversation was transcribed on the group’s website.

As a group of Israelis and Palestinians, Kids4Peace participants “feel the pain of both sides like almost no one else,” Thomas wrote to the community on Oct. 14.  He said staff and parents would “reconnect with our sisters and brothers across the lines of conflict,” in person or virtually; the fall programs for 120 students would begin as planned the following week, meeting together if it was safe; online or in homes, if not.

“We had difficult days last week,” Thomas said in an Oct. 22 interview. “I’m hearing new ways of mistrusting the motivations of the other side, even in our group.”

Publicly, he declared: “We feel called to take leadership in building a new future. Division, despair, hatred, fear, injustice—this cannot be our future.”

As comments posted on the organization’s website make clear, kids who participated  in the program’s monthly meetings, quarterly overnights and summer camps in the U.S. over the years, say it opened them up in new ways. In one of the most poignant remarks—unattributed by religion or ethnicity—a student said: “Kids4Peace broke the wall of hate in my heart.”

In sixth grade, the students explore each other’s religions and the Israeli-Palestinian conflict through dialogues, workshops, volunteering and a summer camp. In seventh grade, the focus shifts to fostering relationships and solidifying commitment to peace. In eighth grade, a year for coming of age, students tackle historical narrative and personal identity and how they relate to the broader community. The ninth grade program centers on leadership skills and issues of living in a conflict zone. Finally, participants are offered opportunities to become counselors in training with the Kids4Peace program in the 10th and 11th grades.

'From Personal Transformation to Societal Change'

“The value of this project is the embrace of self-reflective practice,” said Lucy Kurtzer-Ellenbogen, USIP’s director of programs on the Arab-Israeli conflict. “They are asking the tough questions of themselves and their work at a particularly trying time in the field—how do you move from personal transformation to societal change?”

An interim report on the research paints a complex picture of Kids4Peace outcomes. Participants value their relationships, the experience of respectful cooperation and the model they’ve created of peaceful interaction. They have found Kids4Peace a sane sanctuary amid war and violence.

But fear is high: almost everyone is more afraid for physical safety than at any point in their lives. Confidence in a peace process is low: emotion and frustration are taking a growing toll even on committed peacemakers.

Almost every Jewish Israeli said their time in the Army is a turning point in their lives and, for many, one that can sometimes force compromise with their values. For Palestinians, Jewish Israelis’ mandatory military service leaves them asking why friends would agree “to occupy us,” since their only association with the Israeli military is likely of soldiers serving at checkpoints and within the West Bank.

The general climate is such that “people are more drawn to extremes now,” Thomas said. “They have to be demonizing the other, totally pro-Palestinian or pro-Israeli.”

Yet, on Oct. 22, with the violence unabated, Kids4Peace’s fall session began as scheduled. More than 100 grinning kids and 50 of their parents gathered in Jerusalem for an evening of music, dance, and tough dialogue, Thomas reported to his supporters, sending along photos. The meetings were moved to avoid locales perceived as most dangerous, and a conference line was set up for people too concerned about security to come.

“Everyone says similar things,” Thomas said. “Kids4Peace provides a place to be honest, to share, to disagree. In the end, they come and see again, yes, there is an alternative.”

The guiding principal, he said, is stubborn optimism. 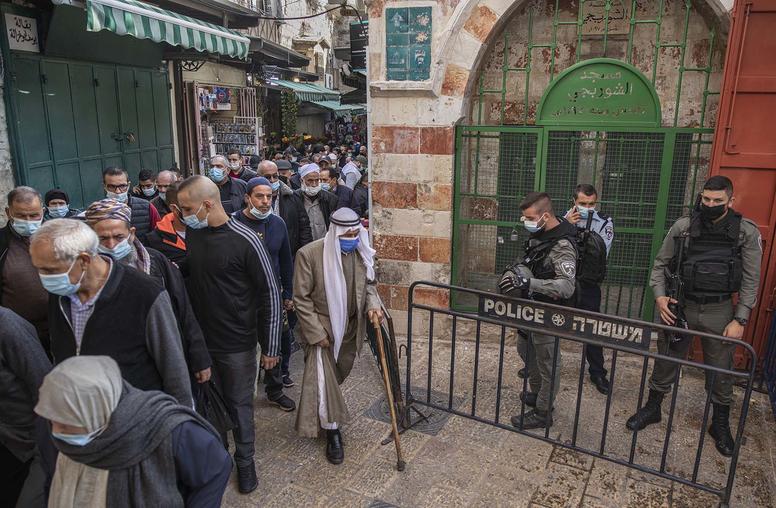 Lucy Kurtzer-Ellenbogen, director of the Israeli-Palestinian conflict program, testified on July 21, 2021 at the House Foreign Affairs Subcommittee on the Middle East, North Africa, and Global Counterterrorism's hearing on "People to People: Examining Grassroots Peacebuilding Efforts Between Israelis and Palestinians." Her expert testimony as prepared is presented below.

In a scene reminiscent of the uprisings that swept the Middle East 10 years ago, Palestinian protesters took to the streets over the weekend, chanting, “The people want to bring down the regime.” The recent death of activist and Palestinian Authority critic Nizar Banat while in the custody of Palestinian security forces was the proximate cause for the unrest. But Palestinians’ disenchantment with their leadership has much deeper roots. Fifteen years after the last national elections, the Palestinian polity is as fractured as ever, adding but another obstacle to resolving the seemingly intractable Israeli-Palestinian conflict.