Croatia celebrated across continents on July 1 to mark its official entry into the European Union. But it wasn’t surprising that a panel discussion at USIP to discuss the country’s 18-year path from war to European integration ended up focusing mostly on the countries still left on the fringes.

Even Croatian President Ivo Josipovic, speaking at a ceremony in the capital Zagreb on July 1 just past midnight, when Croatia officially joined the European Union, used the occasion to make the point. “We don’t want Europe to stop at our borders,” he said, according to a Reuters report. “It must be open to other countries.”

The question also arose at USIP’s discussion later the same day -- what it would take, and how long, for the other former members of then-Yugoslavia to join the European Union. Slovenia, a former Yugoslav republic that experienced only a few days of skirmishes after it declared its independence, joined the EU years ago. Serbia, Bosnia, Macedonia, Montenegro and Kosovo still lag behind.

The others, with the exception of Macedonia, were caught up in the brutal wars of the 1990s that killed more than 120,000 after Croatia and Bosnia issued their own declarations of independence in 1991 and confronted resistance from ethnic minorities and their backers across the new borders. Even Macedonia, which avoided conflict, remains in limbo today because of a dispute with Greece over its name, officially for the moment the Former Yugoslav Republic of Macedonia.

At USIP, Croatian Ambassador to Washington Joško Paro pledged his country’s technical assistance and political support for further integration. The most important elements in Croatia’s progress toward the EU were to build the capability for reconciliation with former enemies and compromise with them and internally, he said.

Jonathan Moore, the acting deputy assistant secretary of state for European and Eurasian Affairs, said Croatia’s entry shows the possibilities for the others. He cited decisions last week by leaders of the European Union that Serbia could begin negotiations on joining the bloc in January, and that the union would begin preparing for the preliminary step of an association agreement with Kosovo.

A lot of regional progress can be attributed to not only bilateral diplomacy but also “the draw of the European Union, the leadership in Brussels, the interest of the member states,” Moore said.

A European Union that was ill-equipped to deal with the conflicts that broke out on its own continent in the 1990s ultimately found its way to effectively steering Croatia in the post-war period toward accession, Paro said.

Ambassador João Vale de Almeida, the head of the delegation of the European Union to the United States, cited the entry of Croatia into the bloc of some 500 million people as fresh proof that the union is “the greatest, most successful peacebuilding and conflict prevention enterprise of mankind.” It also reaffirms the EU’s ability to attract and be the driving force for reform and reconciliation, he said.

“It started with France and Germany,” Vale de Almeida said, referring to the continent’s history of wars, dictatorships and intolerance. “It now is further completed by the arrival of Croatia.”

The U.S. also was vital to Croatia both during the war and after, including the country’s NATO membership in 2009, Paro said. The

Ambassador Peter Galbraith, the first U.S. chief envoy to Croatia during the war and later went on to serve with the United Nations in Afghanistan, said he found the significance of Croatia’s EU entry “a bit overwhelming.”

Galbraith had just returned from Dubrovnik, a UNESCO World Heritage site on Croatia’s southern coast, days earlier and realized as he left that it would be the last time he would have to go through passport control flying from Croatia to Vienna because the EU barriers would be dropped. The first time he visited Dubrovnik in December 1991, he entered by boat through the old port during a ceasefire, just days after wartime bombardments of the city.

The situation in the region at the time pointed to a Cyprus-like permanent division in Croatia with the Serb-held areas of the country, next door to a Lebanon-like situation in Bosnia, with its fighting among three ethnic groups, Galbraith said. With the EU stumbling in its mediation role, ultimately it was the U.S. that brokered the deals to end the wars in Croatia and Bosnia.

But the EU’s values have transformed the bloc and allowed it “to build such vibrant institutions, that it is absolutely anchoring, in an irrevocable way, the peace in Croatia,” Galbraith said.

Paul Hughes, senior advisor for international security and peacebuilding at USIP, said partnerships such as the EU “are absolutely critical for a country and its people to meet today’s challenges.”

Croatia advanced to this point from a “shattered state and a wrecked economy” in the wake of the war that ended in 1995, said Hughes, a former active-duty colonel in the U.S. Army. “Croatians are now not only responsible for upholding the political, social, judicial and economic gains made over the past decade, but are also poised to advance these ideals among their neighbors and other states in the western Balkan region.”

Viola Gienger is a senior writer at USIP and moderated the Croatia panel discussion.

Over the years, the USIP Grant Program has supported a number of noteworthy projects aiming to develop large-scale public archives of primary and secondary information about conflicts in various countries.  A particularly impressive documentation effort is being carried out by a nongovernmental organization in Bosnia-Herzegovina, the Research and Documentation Center (RDC), whose work has been supported by two USIP grants, one of which commenced in May 2010 and remains ongoing.

Working in partnership with the Institute for the Study of International Migration (ISIM) at Georgetown University, USIP offered a two-day seminar as part of ISIM´s training program for managers of humanitarian operations. 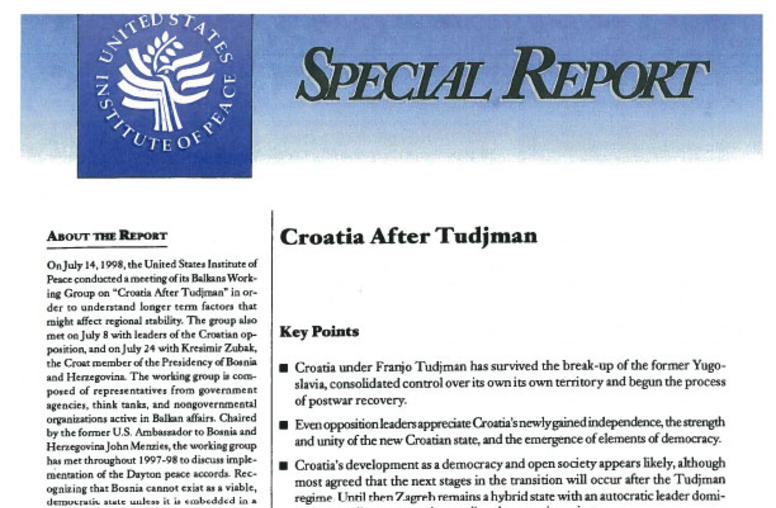 Recognizing that Bosnia cannot exist as a viable, democratic state unless it is embedded in a region that is itself stable and democratic, the Institute has begun a Bosnia in the Balkans Initiative to explore the prospects for regional political and economic development.  The Balkans Working Group on "Croatia After Tudjman" met in order to understand longer term factors that might affect regional stability.  The recent meeting on Croatia is one component of this work, which has included separ...