How does the disrupted U.S. troop withdrawal in response to the coronavirus crisis impact the U.S.-Taliban agreement and the next phase of the peace process?

The disruption is likely to be temporary, allowing the U.S. military to ensure that the transfer of troops from Afghanistan back home does not exacerbate the coronavirus situation. The commitment made in Doha in February is for the U.S. to reduce troop levels to 8,600 within 135 days. This is still doable. The larger impact is likely to be the Afghan republic’s long-delayed preparations for intra-Afghan talks.

Addressing the coronavirus crisis in Afghanistan is both a legitimate priority for the government and a convenient excuse to ignore the imperatives of the peace process, which some Afghan leaders have tried to slow-roll lest it threaten their positions. But it is extremely difficult to address pandemics in a situation of civil war, where no single government has control, people’s movements are unpredictable, and access to medical care is scarce. Ultimately, the virus is stress-testing every country in the world, revealing vulnerabilities. In Afghanistan, it is beginning to show just how costly the war is.

Although President Ghani agreed last weekend to release 1,500 prisoners Taliban prisoners, none have been released. Why the hold up? And how could the coronavirus outbreak impact decision-making on this issue?

The terms of the Doha agreement were that the Afghan government would release up to 5,000 prisoners. The Taliban have taken a maximalist interpretation of the somewhat vague clause. The Afghan government, understandably, is reluctant to hand over so many prisoners at once, and proposed a staggered release, beginning with 1,500, with additional releases subject to progress on the peace talks. The Taliban have rejected this and the government has therefore not gone ahead. Technical discussions have taken place over Skype between Kabul and Taliban teams on the details of a release. Secretary Pompeo, during his Doha visit appeared to have appealed to the Taliban to accept an initial release of fewer than 5,000. The issue can become quite complex. In the past, the Taliban and government have not always agreed on the names and there is the matter of guaranteeing that they don’t become combatants once released.

Coronavirus adds an additional complication. As experts have pointed out, prisons are hot spots for contagions. If there is an outbreak of the virus in Afghan prisons where Taliban fighters are being held, their release could prove problematic. The Afghan government and international community will not only have to worry about keeping them off the battlefield, they will need to worry about keeping them from spreading the contagion.

With parallel governments claiming legitimacy, how can the Afghan state mitigate a coronavirus outbreak? Could the COVID-19 crisis bring the Ghani and Abdullah camps together?

Afghanistan’s public health system is weak as it is. Kabul’s terrible air pollution and the respiratory diseases it has caused has probably made far more people vulnerable to the virus than otherwise would have been. And, as so often happens, Afghanistan is not helped by its neighbors. All 21 identified cases in Afghanistan have been linked to travel from Iran, but Iran has rejected the Afghan government’s plea to restrict border crossings where as many as 15,000 people are crossing every day.

The civil war conditions, especially in rural areas, will exacerbate the effect: health facilities are scarce, knowledge about the pandemic is low, and movement is sometimes necessary for survival—to reach a market, to find work, or to escape from fighting. So even if the political divide were healed it is not clear how much could be done. That said, the coronavirus pandemic is forcing people all over the world to re-evaluate what is truly important. There is no question that public health efforts would benefit immensely from a cessation of violence and a unified national government, creating a huge opportunity here for the political class to find a way of coming together for the greater good of the country. Little in recent history suggests that they will take this opportunity.

What was the purpose of U.S. Secretary of State Mike Pompeo’s trip to Kabul on Monday?

There is a sense of urgency to get intra-Afghan negotiations off the ground before the momentum generated by the Doha agreement dies. Secretary Pompeo’s visit showed, in harsher terms than Afghan leaders are used to, that the U.S. priority is a peace negotiation involving the Afghan government and Taliban—not mediating a protracted dispute over the election. U.S. patience with infighting among Afghan leaders has seldom worn thinner. The disagreement between Ghani and Abdullah Abdullah—who both claim they have the legitimacy to govern—is a clear impediment to the formation of a negotiating team and the launch of intra-Afghan negotiations. The purpose of the visit was to send a clear message that the disagreement had to be resolved.

It is also likely that Secretary Pompeo's stark statement was partly aimed at dispelling the views of some in Kabul that the U.S. push for a negotiated end to the war is one of several policy options, and that Washington can be convinced to extend its presence in Afghanistan under similar conditions as the last five years. The statement makes clear that a negotiation is the only policy that the U.S. will support. The elections were intended to facilitate that outcome, not replace it.

Kabul could buy itself significant time and goodwill by entering serious peace talks with the Taliban.  This would not only do much to improve Afghan leaders’ relationships with the U.S. and international community, but also give the country a chance at a cease-fire to help fight COVID-19, and at a political settlement that could at last end Afghanistan’s long and crippling war. 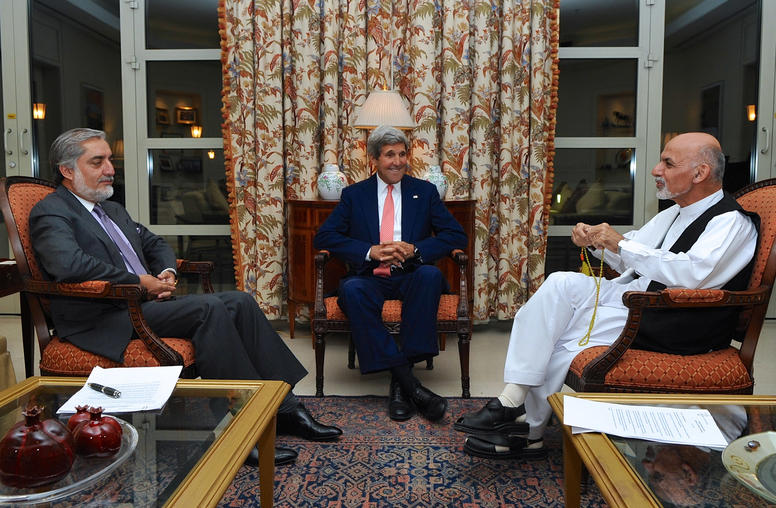 Since 2001, Afghan women have assumed larger roles in society—becoming teachers, doctors and government officials. With intra-Afghan talks expected to begin this month, USIP’s Belquis Ahmadi says it’s important the Taliban “accept the reality that today’s Afghanistan is very different from the country they ruled” when it comes to women’s rights.