A leader of the medical students’ campaign is Maria, a 26-year-old medical student in the capital, Caracas. Maria (USIP is not using her real name to protect her security) works not only to provide health care to her fellow Venezuelans, but also to mend the conflicts that deepen human suffering and polarization in her country. Maria is a USIP Generation Change fellow.

In April 2017, anti-government protests erupted in Caracas and cities across the country. Students and workers took to the streets, blaming the government for the country’s food shortages and economic collapse, and opposing its attempts to dissolve remaining democratic institutions. President Nicolás Maduro, whose 2018 election was disputed by the Organization of American States, the European Union and other international and domestic organizations, deployed riot police and national guard with water cannon and tear gas to disperse the crowds. Pro-government gangs joined the chaos.

“There were people wounded who were not even a part of the protests, older women who were suffocating from the tear gas or people returning from their jobs who were injured,” Maria said in an interview. She organized her medical school peers to create Cruz Verde (“Green Cross”), a volunteer brigade of first responders. With what few supplies they could gather, the students followed protesters to the streets to provide first aid to those wounded, whether they were protesters, police, government supporters or innocent bystanders.

Health care providers are naturally bridge builders in polarized societies such as Venezuela’s, Maria says, because of the principle enshrined in every doctor’s Hippocratic oath to care for people without distinction. Amid the protests and tensions in her country, “I felt that I could be the neutral party that made both sides involved in the conflict understand that the person on the other side was also Venezuelan,” Maria said. As she worked amid the protests, “to be honest the police treatment I received for the most part was not unpleasant,” she said. “I was convinced … that my contribution was to make them see that the person on the other side could be their father or son.”

Maria says her natural desire to build bridges in her conflict-riven nation found reinforcement in a USIP training course she took in early 2020 with 22 other young Venezuelan civil society leaders, all Generation Change fellows. The training offers skills with which these youth leaders can help build peace in their communities.

Maria began combining her public health campaign with discussions in local neighborhoods on ways that residents can address and reduce violence. As she has met various groups, she says, her training helps her to detect attitudes, biases and behaviors, such as micro-aggressions, that she did not see before. She asks people to step back from their judgments of others, she said. “To change the country, we need more people who learn to respect others.”

Maduro says Venezuela is containing the virus, yet experts such as USIP’S Keith Mines say Venezuela is highly vulnerable to the pandemic. The reported incidence of COVID has been arcing upward, more than doubling in August, according to totals from the World Health Organization. But no reliable picture of the pandemic is available—not least because authorities have arrested journalists who report on the virus’ spread and medical staff who have denounced shortages. Officials have threatened critics, including scientists and doctors, who challenge the regime’s response to the pandemic. In May, the country’s academy of sciences reported that the government was underreporting COVID cases. Severe repression of health care workers makes it nearly impossible to know the full dimension of the spread and death rates in Venezuela.

Repression as a COVID Response

From the start, some analysts say, the regime has been using the pandemic and the quarantine measures to reestablish its political and social control. The government’s priority “is not dealing with the pandemic; it is short-term political survival,” according to Caracas-based political scientist John Magdaleno.

Troops and police have detained thousands of residents in makeshift quarantine centers on suspicion of having been exposed to the virus. The detentions have increased as COVID’s effects—shrunken economies and lockdowns—have forced Venezuelan migrants abroad to return home from nearby countries. As tens of thousands of people have streamed home from Colombia, many crossing the border via remote footpaths, Maduro’s regime has denounced the returnees as “bio-terrorists” and detained many. A commissioner with the Organization of American States, David Smolansky, reported that in quarantine shelters, “people are crowded, they sleep on the floor in places that do not even have water, the Bolivarian National Guard charges them passage in foreign currency and social isolation protocols are not followed.”

Few Venezuelans can afford facemasks—and those who can flock to the streets with a false sense of security in overcrowded food markets, says Maria. Social distancing is nearly impossible in an economy where 40 to 50 percent of people struggle in a subsistence economy, hustling daily in labor or petty commerce to earn the money they need to buy food and survive. Water and soap shortages prevent people from seeking even the most basic protection of washing their hands frequently.

The medical system that Maria and her fellow students will soon join is in ruins. The flight of refugees and migrants from the nation’s crisis has included more than 30,000 doctors and nurses. Most public clinics and hospitals lack soap and disinfectant—and the shortages of adequate staff and even water or electricity emerged from a survey in March by a doctor’s association. Even before the pandemic, hospitals had only 2 to 3 percent of the medical supplies they needed, the Venezuelan Medical Federation reported a year ago.

Despite the poor conditions and repression from the regime, doctors and healthcare workers are finding creative ways to attend to patients and mitigate the spread.

Maria and her classmates used WhatsApp, Venezuela’s most ubiquitous social medium, to develop a user-friendly system to let people find verifiable information on COVID cases, common symptoms and where to get help. Within days, these medical students became programmers, designing a “bot” for use with the app and a set of algorithms.

As Venezuelans have groped for reliable information, the students’ project offers descriptions of common COVID symptoms, the best available statistics and ways to find doctors. People who think they may be showing symptoms of the virus can be screened and get direct access via WhatsApp to a doctor who can verify any respiratory infection and identify which hospitals or clinics the patient can visit. The students’ bot has been accessed by thousands of Venezuelans seeking advice, Maria said.

The students also have been going out into the most vulnerable communities around Caracas and other cities to give briefings to small groups of community leaders on COVID’s spread and ways to prevent it. And, making use of her training, Maria says, she emphasizes the need, and the ways, for neighborhood leaders to reduce the conflict and violence fueled by the country’s political crisis.

After Maria completes her medical studies, she plans to pursue a public health degree. The COVID pandemic, she says, has reinforced her conviction that public health can serve as common ground on which to rebuild community in a nation where poor governance and unmanaged conflict have polarized the society and made violence routine.

“More people are needed to unite and not to encourage politicization in the country,” she said. “This 100 percent reaffirms what I want to do, commit my life to public health.”

“In the medical world, when you are young, they do not pay much attention to you,” Maria said. “But I want to continue studying to keep helping with an organization that positively impacts people”. Rebuilding Venezuela’s shattered public health infrastructure and its sense of community will take years, she acknowledges. But the COVID pandemic only underscores the need to combine those tasks, and for her to make that her mission.

Paula Porras is a program officer at USIP. 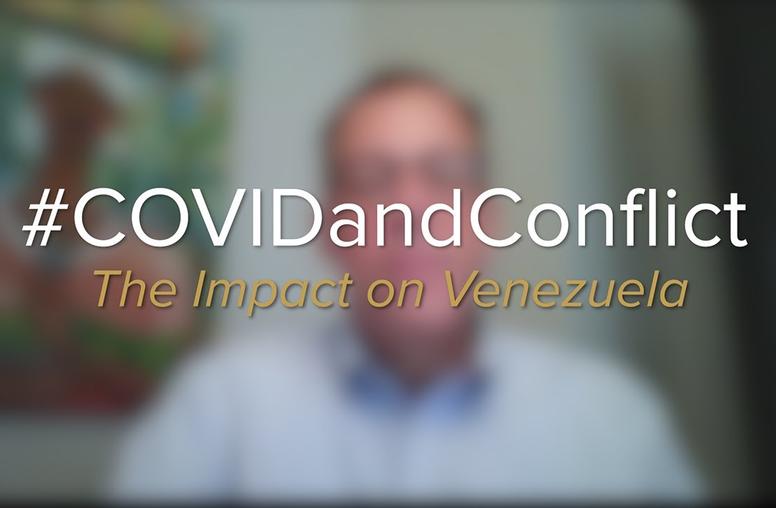 As Latin America emerges as a global epicenter for COVID-19, Venezuela’s political uncertainty, crumbling health care system and widespread food insecurity leave the country particularly susceptible to the pandemic. Yet the urgent threat of the virus could force cooperation between the country’s competing governing bodies, particularly on health and humanitarian issues. Our Keith Mines outlines the pandemic’s toll on Latin America, Venezuela’s response to COVID-19 so far and what opportunities exist for ending the country’s political impasse.

The humanitarian crisis in Venezuela is reaching proportions not seen in Latin America since the 1930s. Meanwhile, USIP’s Keith Mines says the country is at a “tragic impasse, and that impasse is entirely political,” as both Juan Guaidó and Nicolás Maduro maintain their respective claims to power. 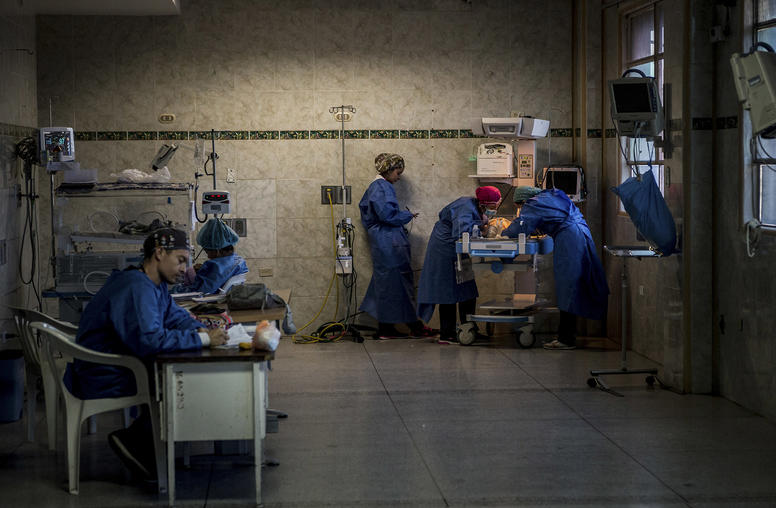 Helping Venezuela resolve its political crisis will be vital to containing the potentially catastrophic COVID-19 pandemic there. A truce in the country’s power struggle is urgent, and last week’s U.S. proposal for a transitional government offers useful ideas, even for a naturally skeptical governing regime. Advancing them would benefit from mediation, perhaps by the Vatican or the United Nations, and will require cooperation among the major powers—the United States, Russia and China—involved in the crisis. If Venezuelans and outsiders can join against the common human threat of coronavirus, that could lay foundations for an eventual political solution to the decade of turmoil that has brewed the hemisphere’s worst humanitarian disaster.