Upon entering office, the Biden administration was faced with a hemisphere in tumult. The COVID-19 pandemic had wrought havoc on health care systems and economies throughout the Americas — instigating new crises and aggravating others that have long plagued the region.

To prepare, national security officials made a concerted effort to plan for all the possible developments that might unfold over the course of President Biden’s term, according to National Security Council Senior Director Juan Gonzalez. Almost two years in, Gonzalez said there hasn’t been much that has surprised them, noting that “a lot of what is happening in the region, we expected would happen.”

But anticipating challenges and addressing them are two different endeavors. And Gonzalez, who oversees U.S. national security policy for the Western Hemisphere, has been clear-eyed about the Biden administration’s ability to resolve some of the region’s most persistent issues in the short term: “You don’t address [issues] that even predate the Cold War in one administration.”

Getting Out from Under the Pandemic

Speaking at a USIP event, Gonzalez noted that early on, combating the COVID-19 pandemic was a top priority as the United States shared 70 million vaccines with countries throughout Central and Latin America to date.

With the worst of the pandemic hopefully in the rear-view mirror, the United States has begun shifting its approach to hopefully help ramp up not just U.S. bilateral engagement, but multilateral dialogue throughout the region.

Reinvigorating consensus-based organizations, like the Organization of American States or making the Summit of the Americas an annual event, would offer venues for discussing the “very specific challenges that we face in the Americas that we don't face in other parts of the world,” said Gonzalez. “[The United States] tends to focus on the G-20 space or the U.N. space … We do need to have, I think, a regular place for the entire hemisphere to have these debates.”

Governance Shortfalls Throughout the Region

Across the Americas, poor governance is a recurring grievance from citizens. “It seems that there's just widespread discontent, particularly among young people,” said Keith Mines, USIP’s director for Latin America programs. “And it's a very youthful hemisphere that is seized with the issue of socio-economic equality.”

This disillusionment isn’t bound to one end of the political spectrum or another, as leaders of all political inclinations have felt this growing frustration. “[Citizens] feel like governments are working for a small political and economic elite, that governments are corrupt,” said Gonzalez.

While support for democracy is still higher in Latin America than other parts of the world, the region has shown concerning signs of creeping authoritarianism, particularly in the wake of the pandemic.

For the United States, this means the question is no longer about how to promote democracy in the hemisphere, but rather how to ensure democracies can deliver the social, economic and political stability that people are demanding. “We need to focus less on whether or not you agree with us, and more so about how you are elected and how you govern democratically,” said Gonzalez. “This is not about where you are on the political spectrum, but how you are delivering.”

Chile’s recent constitutional referendum has caught international attention as an example of how countries can incorporate citizens’ input in governance decisions. It was widely accepted that the previous Pinochet-era constitution wasn’t working — but rather than make changes to guard their power, Chilean leaders from across the political spectrum, led by President Gabriel Boric, had committed to a more democratic process. Even though the most recent iteration failed a public vote and has made many observers nervous, Gonzalez suggested we have patience with the complex process, saying the region has been a “200-year-old laboratory for how to deliver in a democratic space” and that Chile’s latest experiment “is something that is worth watching.”

Where Does the Biden Administration Go from Here?

Narrowing the focus from hemispheric challenges to national ones, the Biden administration has tried to develop diplomatic approaches that cater to the unique issues facing individual countries throughout the Americas:

Colombia: Gonzalez admitted that in the past, the United States might have undermined a Colombian president like the recently inaugurated Gustavo Petro — but today, he said, “the Colombian people elected him, and we have to find a way to work with him, even if we disagree … Petro really captured the desire of the Colombian people.”
The key to U.S.-Colombian ties will be finding ground for easy cooperation, like helping to implement Petro’s “Total Peace” agenda and the 2016 FARC agreement using USAID resources.

On more contentious issues, such as counternarcotics policy, Gonzalez said the United States will keep dialogue and debate open with a focus on outcome-oriented policies — which will hopefully provide U.S. counternarcotics strategy with a much-needed update.

Central America: With U.S. commitments topping $4 billion, it’s clear that “the migration challenge in the northern part of Central America will not be fixed with foreign assistance,” said Gonzalez. Instead, Vice President Kamala Harris has spearheaded a novel approach using private sector investment.

In a region where many government officials are sanctioned and economic interests are controlled by a small group of people, Vice President Harris has used the profit proposition of Central American markets to incentivize transparency from private sector sources, mobilizing billions of dollars in the process. The hope is that the influx of capital will both expand economic opportunities for citizens and loosen the grip that a select few corrupt political actors have over state and financial resources — hitting several of the main drivers of migration.

Haiti: With 60 percent of the country suffering from food insecurity, the humanitarian crisis in Haiti is “one of the issues that keeps me up at night,” said Gonzalez. “I feel there is a lack of ambition and new thinking on Haiti.”

Too often, the purpose of intervention in Haiti has been to protect short term interests. Powerful economic actors safeguard their own preferential arrangements with governments “at a time when people are literally starving too death.”

The result has been an increasingly unstable and decentralized power structure in Haiti, where gangs exercise more authority than at nearly any point in the country’s history. With political legitimacy hard to come by, the Biden administration has instead focused on dialogue between Haiti’s disparate stakeholders in the hopes of creating a path toward free and fair elections.

However, legitimate elections remain elusive for the time being. “Right now, if you have an election, maybe 5 percent of the people will vote. In the past, you’ve had leaders come in with 10 percent of the vote,” said Gonzalez. “Is that legitimacy?”

In the interim, the United States has increased humanitarian aid — but much of that aid isn’t getting to those who need it most, as parts of Haiti’s urban population live under the complete control of gangs and criminal organizations. This has prompted work to strengthen the Haitian National Police in the hopes that they can rein in the rampant violence and help facilitate a more conducive environment for humanitarian assistance.

Venezuela: The U.S. approach under President Biden is “to not make the mistake of thinking that we're actors inside of Venezuela,” according to Gonzalez, as only a dialogue among Venezuelans can create a path back toward democracy. There’s some hope for competitive elections in 2024, but the Maduro government’s obstinance toward negotiations with the opposition complicates those ambitions.

As an external actor, the United States has instead tried to “internationalize” the dialogue process by engaging as many countries as possible in support of Venezuelan democracy — both to put pressure on the Maduro regime and cut off attempts by Russia and China to sustain support for the Venezuelan status quo.

However, the Biden administration has declined to enact additional sanctions, arguing that doing so would not be productive and could even shrink the space for dialogue. Gonzalez made clear that the future of sanctions on Venezuela will be determined by the Maduro regime’s willingness to negotiate in good faith: “We are prepared to alleviate sanctions on the basis of progress at those talks, and we will re-implement those sanctions if there is regress or if there's an absence of talks.”

In closing, Gonzalez referred to the America’s Partnership for Economic Prosperity as an effort to model the administration’s domestic economic agenda on a hemispheric scale — improving governance while mobilizing private sector partnerships to focus on investment, technology, energy and updated free trade agreements. By demonstrating how it can benefit people’s lives and provide economic opportunities, the democratic free-market model can out-compete the approaches offered by authoritarians in the hemisphere and from abroad. 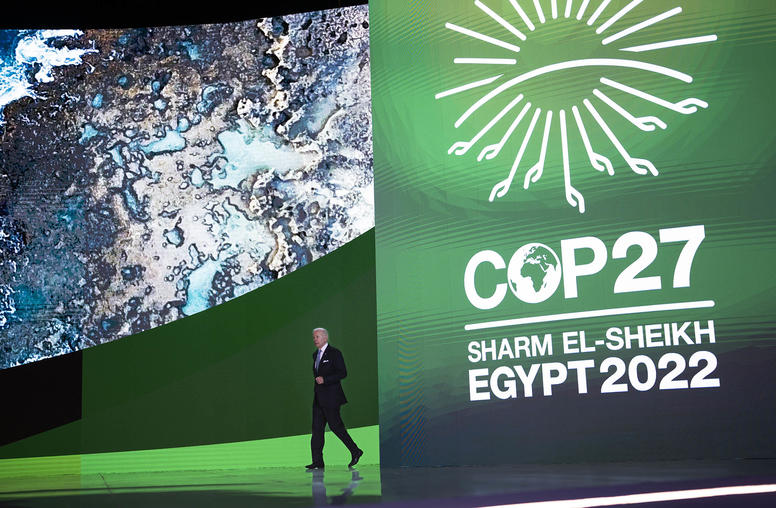