Colombian voters yesterday defied projections by pollsters and rejected a peace accord that their government had negotiated during four years of talks with the Revolutionary Armed Forces of Colombia (FARC-EP). The agreement was intended to end more than a half century of violent conflict that has left well over 220,000 dead and close to 8 million victims, including more than 6 million people forcibly displaced. USIP’s Senior Advisor for Peace Processes Virginia M. Bouvier explains why voters might have rejected the deal and what happens next.

President Juan Manuel Santos and FARC leader Rodrigo Londono, better known as Timochenko, had settled on the final outstanding elements of the accord in Havana in August and signed the agreement on Sept. 26 in Cartagena. In the interim, the process of carrying out the demobilization and disarmament of the FARC had already begun.

The FARC had promised to hand over all of their weapons within six months of the signing to the United Nations, the principal guarantor of both the ceasefire between the sides, reached earlier this year, and the decommissioning of arms. In exchange, the government has agreed to guarantee the FARC security conditions and 10 seats in Congress for the next two terms.

Public opinion polls had projected a healthy win of between 66 percent and 72 percent for the “yes” vote. Yet voters rejected the agreement, albeit by a narrow margin of less than 60,000 out of 13 million votes cast.

Why did Colombian voters reject the deal?

The results reflect a country united in seeking peace, but deeply divided over how to do so.  The accords in many respects are premised on a commitment to reconciliation, which is a hard sell in a country where the FARC has been the enemy for so many years.

Those promoting the “no” vote, including former President Alvaro Uribe, had a clear message on justice: the FARC should serve jail time and should not serve in Congress.  The “yes” vote had a much harder sell. The accord was 297 pages and few had read it (they had only one month). The agreement on justice was particularly complex; there was confusion about amnesties and pardons and concern that the FARC would not be adequately punished for their crimes, even though this accord is one of the first to explicitly deny amnesty or impunity for sexual violence or other war crimes, crimes against humanity or genocide. Amnesty would have applied only to the crime of rebellion and related activities, a practice promoted by international humanitarian law when a war ends.

Disinformation was pervasive, especially on social media, and misrepresentations of what the accords did or didn’t say were virtually impossible to correct in that venue.

The decision might have been influenced by public sentiment about President Santos, who is unpopular for his handling of the economy. Other possible factors include that evangelicals and the Comptroller General in Colombia conflated the work of the gender subcommission in the peace talks and provisions for equal rights for women and LGBTI individuals with what they saw as efforts by the Ministry of Education to undermine “traditional” family values. Efforts to open citizenship to all, including peasants and other excluded sectors of society, may have been seen as a threat to the status quo too.

You were in Cartagena last week for the signing ceremonies. What did you hear from people in the streets?

Most of those I spoke with favored the “no” vote. When pressed on why, most began by saying of course they preferred peace.  But they had concerns about the injustices of giving the FARC benefits after such a devastating war. People cited what they saw as privileged access to higher education, and paid benefits that weren’t available to their own children. Their understanding of these benefits was often quite exaggerated—one woman told me she worried that the FARC would take over the country since they would be give dozens of permanent seats in Congress. In fact, the Accord guaranteed the FARC only 10 seats—less than 3 percent of the Congress—for two terms, after which they would be on their own.

Notably, although the central argument of opponents was that the accord wouldn’t give victims the justice they deserved via adequate punishment of the FARC, those parts of the country most harshly affected by conflict violence—Cauca, Guaviare, Nariño, Caquetá, Antioquia, Vaupés, Putumayo, Meta and Chocó—showed the strongest vote for “yes.”  Victims and victims groups have been some of the strongest advocates for the peace process.

So what is the effect of the “no” vote?

Both sides are accepting the results as legitimate and have reiterated their commitment to peace. The plebiscite results appear unlikely, in the short term at least, to reverse the march toward a political solution.

President Santos announced that the bilateral ceasefire will be maintained, and that he will convene political and social sectors from both campaigns to discuss ways forward, though Uribe’s Democratic Center Party chose to boycott the meeting. Londoño, the FARC commander, indicated that even with the "no” vote, the group wouldn’t resume violent conflict. Santos also sent his negotiators back at the negotiating table in Havana to establish a process for moving forward. Humberto de la Calle submitted his resignation as head of the government’s team, but it is unclear if it will be accepted.

The plebiscite basically gives government negotiators the possibility of asking for more concessions from the FARC.  But, with such a narrow margin, I don’t think anyone can argue that their side wins. The FARC has not been defeated militarily and has refused to countenance jail time. With a “no” vote, however, the FARC has been dealt a symbolic blow at the polls that will potentially shift the calculus of what is possible. It is clear that Colombians want peace and there is a need for dialogue to find a new solution.

Is there a risk that more widespread violence could resume?

On my recent trips to Colombia, many social leaders and politicians who have led the charge for victims’ rights to restitution and reparations worried about a resurgence of violence in the countryside if the “no” vote won.  The international community should continue to push hard for accountability for any violence against these leaders.

Can the government and/or the FARC proceed with implementing some of the deal’s provisions anyway?

Over the past year, each side has begun to offer symbolic reparations, as well as emotional relief, to victims, as they prepared to address the local impacts of the war and to implement any peace accord that might be reached.

In recent weeks, there has been a clear effort to speed the timetable for securing the ceasefire that the antagonists agreed to even before the final deal, and to begin decommissioning the FARC's weapons—with or without the plebiscite's endorsement. Plans for electoral reform and reintegrating FARC fighters into civilian life also were underway. It is unclear at this point if the UN mission will stay and continue its work.  It would be highly unusual, but if the parties agree to maintain the bilateral ceasefire, it is possible that work would proceed anyway. It is unlikely that the FARC will disarm before another deal is struck, if only for self-protection.

The most obvious implication of the rejection of the accord is that President Santos has not been authorized to implement the peace accord via the fast-track process.  So whatever legislation he needs to put the accord provisions into practice will need to go through the ordinary legislative process.

What were some of the provisions of the accord?

Although debates focused largely on transitional justice measures, the accord included much-needed reforms to modernize Colombian democracy and bring excluded sectors into the national citizenry. The accord sought to correct an accumulation of historic inequities and injustices. Changes included formalizing land titles and achieving a better balance of resources between rural areas and major cities; more equitable political participation with guarantees for opposition parties to access and security; development programs, credit and plans that offer alternatives to illicit crop production; and a greater effort by the state to fight criminality.  These are changes that have widespread support among the citizenry, and should not be seen as concessions to the FARC.

The final agreement created mechanisms to confront the past through historical memory in ways that conform to international standards. In addition to establishing a new comprehensive transitional justice system, both state and FARC representatives took responsibility for their victims in places including Putumayo, Bojayá, La Chinita, Valle del Cauca and Chocó.

What about the victims of this war?

The accord reached in Havana was precedent-setting in its acknowledgement of victims of the war. The negotiators invited victims to participate in the talks and gave them a leading role in what was intended to be a new transitional justice system outlined in the accords.

The process of restitution of lands and collective and individual reparations to victims has been underway since the 2011, and I see no reason that it would not continue.  Ironically, the day before the plebiscite, the FARC announced that they were preparing an inventory of their war chest and would turn all their material and non-material goods over to be used for reparations for victims. 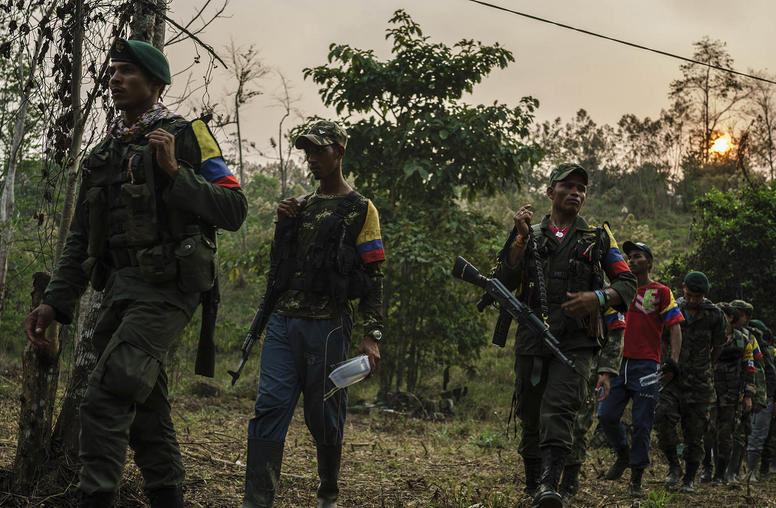