The crucial role of diplomacy in peacefully resolving this historic test of Cold War wills is described here by Bruce W. MacDonald, senior adviser to the Nonproliferation and Arms Control Program with the U.S. Institute of Peace’s Office of Special Initiatives. In this capacity, MacDonald developed and leads instruction of 21st Century Issues in Strategic Arms Control and Nonproliferation, a series of courses for USIP’s Academy for International Conflict Management and Peacebuilding, and advises on issues related to nuclear, space, and cyber strategy and policy as well as missile defense, arms control and nonproliferation. Earlier, he was senior director of the Congressional Commission on the Strategic Posture of the United States, a bipartisan body headed by former Defense Secretaries William Perry and James Schlesinger. MacDonald has also served at the White House Office of Science and Technology Policy, the National Security Council, the staff of the House Armed Services Committee and the State Department’s Bureau of Political-Military Affairs.

What was the Cuban Missile Crisis all about?

Based on what we now know—as more and more previously closely-held information from both sides has become available—we can see that the United States and the USSR were coming from quite different perspectives. In the fall of 1962, the Soviet Union, led by Premier Nikita Khrushchev, saw itself in an increasingly precarious strategic situation. Facing a wide and still growing U.S. advantage in nuclear weapons, especially those that could strike the Soviet homeland, and ringed by many U.S. nuclear bomber bases within allied countries around the USSR’s perimeter, the Politburo in Moscow believed it needed to take a dramatic step. That perception was reinforced by the failed invasion of Cuban exiles at Cuba’s Bay of Pigs, reinforcing Soviet views that the United States would invade the USSR’s one ally in the Western Hemisphere. So Khrushchev decided to position medium-range nuclear-armed missiles in Cuba, increasing the threat to the United States and thus strengthening the Soviet ability to deter American actions—such as invading Cuba—that worried Soviet leaders.

President John Kennedy considered such a new threat intolerable and outrageous, as well as a complete surprise. The Soviets conducted their missile deployments in secret and lied to the U.S. government about them; the missiles were only discovered by U.S. intelligence after the deployment process was well underway. From an American perspective, in the early 1960s the Soviets and their proxies were pushing forward on all fronts—Berlin, Southeast Asia, Africa and Cuba—to advance their own area of control and spheres of influence, while the United States had foresworn any effort to “roll back” communism. As it became clear that Fidel Castro, who had seized power in Cuba in 1959, was a Communist and a Soviet ally, the impression in the United States was that the Soviets were pressing forward across the globe and trying to outflank America in the Western Hemisphere.  Consequently, Kennedy ordered a U.S. “quarantine” of Cuba before additional, longer-range Soviet missiles could be shipped to Cuba. Both countries substantially raised their nuclear-alert levels, and the world quickly moved toward the precipice of all-out nuclear war.

What made the crisis really dangerous?

Both sides had much at stake. The United States suddenly faced a significant escalation of the nuclear threat from the USSR, and the American public would expect and demand Washington to take action. In addition, many countries relied on the United States for security guarantees; if the United States took no action to so direct a threat to its own homeland, that could undercut belief that Washington would honor its security commitments to others. The Soviet Union, having made this move, was very reluctant to back down, both for its own global reasons and because doing so could undercut Castro. With so much at stake, and nuclear weapons at the core of the controversy, all-out nuclear war became a real possibility—by design or by miscalculation. The Cuban missile crisis was the closest the world has ever come to nuclear war.

How close did we come to nuclear war?

We’ll never really know, but the indications were ominous. During the crisis, the United States raised its nuclear war footing to the highest level it has ever been (DEFCON 2), one step below “nuclear war is imminent.” U.S. nuclear-armed bombers were placed on airborne alert, and some of the Soviet missiles and bombers in Cuba were not under the direct control of senior leadership in Moscow and thus could have been launched by less cautious military officers. It would not have taken much of a misunderstanding or misinterpreted command to trigger at least an isolated use of nuclear weapons, which could then have ignited a full nuclear exchange. Some participants in the crisis believed they might not ever see their loved ones again.

What were the key elements in resolving the crisis?

There were several, which are also common to resolving other crises and conflict situations today.

What was the aftermath of the crisis?

The Cuban missile crisis both directly and indirectly led to a number of improvements in the international strategic environment, including agreements to begin to restrain the competition in nuclear arms. One of the first results was the establishment of the Washington-Moscow “hotline” less than seven months after the crisis, giving leaders of both countries a direct link during crises and thereby reducing chances for misunderstanding. This hotline continues in operation to this day.

In addition, the following year the United States and the Soviet Union signed an agreement to ban above-ground nuclear testing. While this pact was also driven by increasing worldwide concerns over radioactive nuclear fallout in milk and other food supplies, a desire to reduce nuclear threats was the overriding factor. Over the following few years, the Non-Proliferation Treaty (NPT), designed to halt the spread of nuclear weapons to other countries, was negotiated and signed, and the United States and Soviet Union took their first direct steps in nuclear arms control, starting with diplomatic discussions and then a summit in Glassboro, New Jersey, in 1967.  Late 1969 saw the beginning of negotiations that led to the first Strategic Arms Limitation Treaty (SALT I) and the Anti-Ballistic Missile (ABM) Treaty. The outcome was also a shot in the arm for U.S. diplomacy more generally and reinforced the notion that effective diplomacy has a central role to play in U.S. security policy.

What lessons from the crisis are relevant today, and how might those lessons influence nuclear peacemaking in the years ahead?

One is the need to avoid major strategic surprise. Where a country’s vital national interests are concerned, strategic surprise can be destabilizing and lead to rushed and possibly unwise decisions by the surprised party. Second is the need to identify one’s own core interests that need to be protected and one’s objectives in interactions with an opponent, along with the need to convey as much clarity on them as possible with one’s opponent. Third, it is essential that each party in a nuclear interaction put itself in the shoes of its opponent and ask why that country is behaving the way that it is. As successful as the missile crisis outcome was, more than one scholar has noted the failure of Kennedy and his senior advisers to ponder more fully why the Soviet Union was introducing the missiles to Cuba in the first place. This does not mean that the Soviet Union should have been allowed to do so, but understanding where the Soviets were coming from would have added clarity in choosing among Washington’s diplomatic and military options. Clearly, the Soviets also had not thought through how the Americans would react if their clandestine scheme came to light. Further, each party needs to emerge from a high-stakes confrontation with a face-saving outcome. A confrontation can come to be seen as an end in itself, without recognition that other issues in the future will be indirectly influenced by the outcome of a current crisis. Knowing that the other side is not bent on absolute triumph and humiliation of the adversary improves the chances for win-win outcomes in the future.

In major-power confrontations, a strong military posture is essential for a country and can favorably influence diplomacy, as the American fleet did in this case. But it should always be used in support of diplomatic and political goals, and resorts to actual armed action should generally be considered as a later-stage instrument to be drawn upon only as necessary. Premature recourse to what are now called “kinetic” operations can spark premature escalation and poor decision making. Skillful diplomacy can also make military issues easier to resolve when military steps are required, such as winning agreement by allies and others to assist. The tendency in a complex crisis to take the seemingly easy way out with a quick turn to military force should be avoided, and time allowed to give diplomacy a chance. As Winston Churchill, who understood better than most that under extreme circumstances war can be necessary, observed late in his life, “to jaw-jaw always is better than to war-war.” 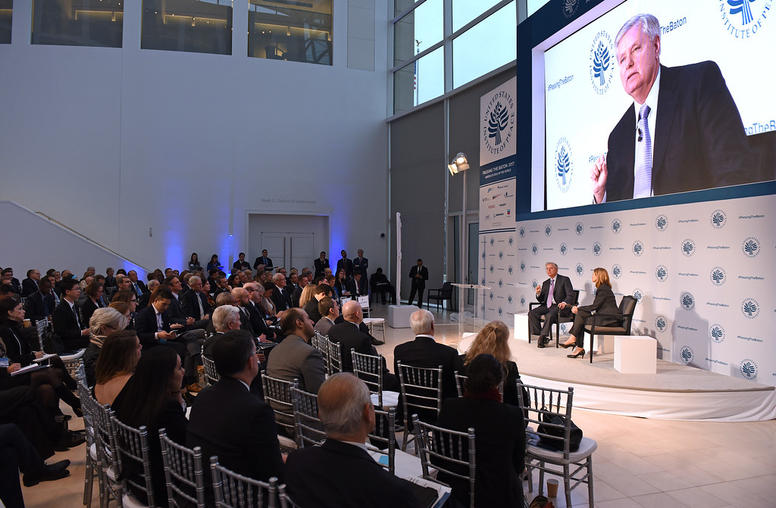 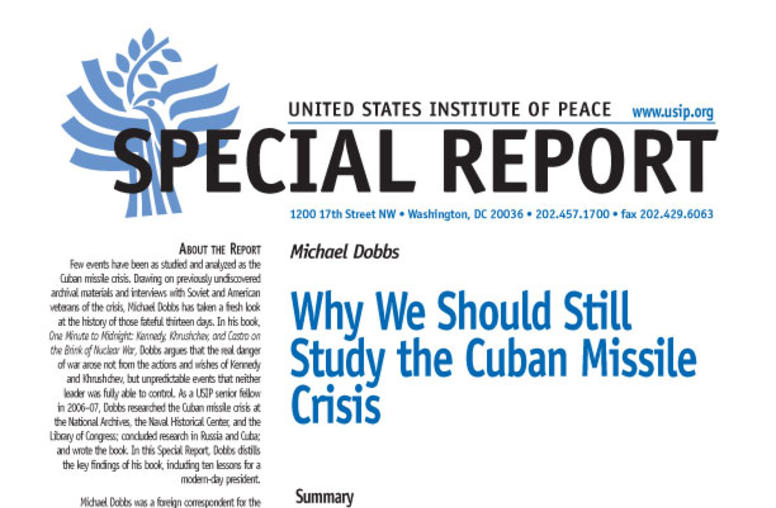