1.  What is on the main agenda when leaders meet in Colombia next week?

The theme of the sixth summit of the Americas to be held in Cartagena, Colombia from April 14-15, 2012, is “Connecting the Americas: Partners for Prosperity.”  Thirty-three heads of State from every country of the western hemisphere minus Cuba and Ecuador-- and their delegations, and thousands of representatives of civil society organizations will attend the summit, organized every three years since 1994 under the auspices of the Organization of American States (OAS).

Discussions will focus on five key areas that will make up the official summit agenda--poverty reduction and inequality, security, integration through improved infrastructure, technology, and natural disasters.  While some Latin American and Caribbean (LAC) countries have experienced economic growth and success in poverty reduction, much of the region--already one of the most unequal and violent regions in the world--shows escalating inequality and violence.  According to a recent report of the United Nations Office on Drugs and Crime, in the last decade, some 1.4 million people of the half a billion people living in the LAC region have lost their lives as a result of violent crime.

Given the economic and political challenges facing the OAS and the region, the need to produce more tangible results from this summit is clear.  Thus, this year’s summit is likely to seek consensus on common goals, procedures, and benchmarks for measuring progress in the various areas outlined in the agenda.

2.  What other issues are likely to be discussed?

A major issue notably absent from the official summit agenda but likely to be discussed at the highest levels is the issue of U.S. drug policies and their impact on the region.  Washington policies have largely favored increased law enforcement and fumigation in the producer countries, while Latin American leaders are challenging the consumer countries to curtail illicit drug demand, and the proliferation of small arms.  Last month, Guatemala’s new President General Perez Molina spearheaded a call for legalization of drugs, that has already been sandbagged, but the region’s leaders will undoubtedly be seeking alternative regional approaches.

The Obama administration has sought to re-frame the problem as a public health issue that requires greater emphasis on drug prevention initiatives and treatment for users, and continues to give lip service to U.S. “co-responsibility” for the problem, a position that has yet to be fully operationalized.  The problem is also linked to issues of small arms, heightened violence, and corruption.

Another likely agenda item is the future of the OAS itself, which is weathering a series of budgetary and political crises.  Many member states are in arrears or are intentionally withholding their dues from the organization, OAS real estate and offices are being leased to make payroll, and staff are being cut.

On the political end, decisions of OAS bodies are being challenged or ignored, and as Latin Americans increasingly exercise their autonomy in a context of reduced U.S. hegemony, new regional organizations that exclude the United States and Canada--namely Unión de Naciones Suramericanas (UNASUR) and the Comunidad de Estados Latinoamericanos y Caribeños (CELAC)—are developing parallel missions that raise questions about the role and relevance of the OAS.

A third agenda item that has already garnered considerable attention relates to the hemisphere’s multifaceted relationships with Cuba.  Two aspects are likely to garner attention in Cartagena--the exclusion of Cuba from the Cartagena summit, and the U.S. trade embargo levied on Cuba (a theme widely considered by the region to be an anachronistic Cold War policy that has outlasted its purpose).

3.  Why is Cuba being excluded from the Summit?

Cuba continues to be an outlier in the regional organizations where the United States has a decisive voice or vote.  Cuba was unceremoniously kicked out of the OAS in 1962, and has yet to rejoin that institution, although in 2009 the OAS invited Cuba to return if it would agree to certain procedures and human rights requirements.

This year’s summit has been marked by controversy over the participation of Cuba in the Cartagena meetings.  The United States, arguing that Cuba did not meet the democratic standards required for participation, bucked the broader Latin American consensus and lobbied hard to ensure that Cuba was not invited to the summit.  Colombian President Juan Manuel Santos engaged in extensive shuttle diplomacy to smooth ruffled feathers among his excluded colleagues.

The exclusion of Cuba has profound implications for the summit process, the OAS, and the hemisphere.  Earlier this week, Ecuadorean President Rafael Correa announced his decision to boycott the summit.  He has underscored that the exclusion of Cuba does not represent the consensus of the hemisphere’s leaders, who agreed at the last summit not to exclude Cuba from future summits.  Failure to design a satisfactory resolution to this issue could easily torpedo future summits.

4.  How will this Summit of the Americas be different from previous summits?

So much has changed since the first summit in Miami in 1994, and even in the three years since the last summit in Trinidad and Tobago, when a newly elected Obama debuted in the region.  The first summit in Miami was designed to rethink multilateralism in the western hemisphere in the aftermath of civil wars in Central America and dictatorships in the South America.  The summit process was envisioned as providing a modern, effective means of ongoing communication and collaboration between newly consolidated democratic states on issues of regional concern.  Many of these issues—poverty, inequality, education, health, trade—have been central and ongoing concerns at these meetings.  Others—drug-trafficking, economic crisis, climate change, refugees and displacement—seem to be moving from the margins but have not yet made their way onto the official agenda.

The relative economic progress of much of Latin America, new and more diverse global partnerships, and Brazil and Colombia’s roles as emerging global leaders underscore the increased autonomy of South American countries since the last summit.  This new context is likely to produce fresh dynamics and may manifest itself in a variety of interesting alliances and agendas in Cartagena.  The challenge for the United States will be to remain sensitive to Latin American nationalist and regional concerns, and to persuade its Latin American partners of the benefits of partnership without creating a perception of coercion.

5.  What do you see as the key issues of conflict and peace that are pending in the hemisphere, and are they likely to be addressed in the Summit?

While regional conflicts in the Americas are not officially on the summit agenda, the summit will provide opportunities to discuss the impact of violence and conflict on the region’s prospects for prosperity, growth, and security.  The summit also provides an opportunity for the region to commit itself to non-violent mechanisms for resolving these conflicts.  Three conflict scenarios are missing from the formal agenda, but are of major concern for the hemisphere:

First, Colombia’s longstanding war has created a humanitarian disaster of vast proportions that is undermining security and peace in the region.  The conflict has forcibly displaced between 3.2-4.9 million Colombians, and sent 400,000 Colombians across the borders (mainly into Ecuador and Venezuela) in search of refuge.  There are signs of escalating violence, particularly in the border areas, where trafficking in humans, weapons, and drugs is also pervasive.  Nonetheless, the stars appear to be lining up within Colombia for a political solution. President Santos is moving ahead with bold land reforms and programs to provide reparations to hundreds of thousands of victims and to restore more than 6 million hectares of land to their rightful owners.  The two main guerrilla groups—the FARC and the ELN—have been calling for dialogue since Santos was elected.  The FARC’s unilateral hostage release earlier this week (facilitated in part by Brazil) and its recent announcement that it will halt the practice of kidnapping for profit is unprecedented.  If implemented, it offers a first step toward building confidence between the sides that could open up new possibilities for peace. The summit in Cartagena will provide timely opportunities for the hemisphere to weigh in on the urgency of a political solution to the conflict.

Second, the summit will provide an opportunity to strategize about new ways to address from a regional perspective the wave of violent crime and insecurity sweeping the region.  Such criminality, exacerbated by drug-trafficking, gangs, and organized crime, feeds on weak and inadequate state institutions, corruption, social and economic exclusion, and the alienation of youth.  Strong-arm policies and the engagement of the military in fighting drugs have unleashed their own set of related problems, particularly in Mexico, where some 47,000 people have been killed in the last six years, and new regional approaches are desperately needed.

Third, Argentine and British leaders are engaged in a campaign that is opening old wounds and renewing resentments over what is seen as British colonial control in the hemisphere.  Thirty years ago this week, Argentina’s military junta invaded the Malvinas/Falklands Islands, then under dispute, and after 74 days and 900 deaths, lost control of the Islands to the British.  Both Britain and Argentina have been traveling across the hemisphere in recent weeks to garner support for their opposing positions respecting territorial sovereignty.  A consensus at the Summit urging the parties to enter negotiations, as recommended decades ago by the United Nations, could be timely and prevent the current inflammatory rhetoric from igniting a renewal of violent conflict. 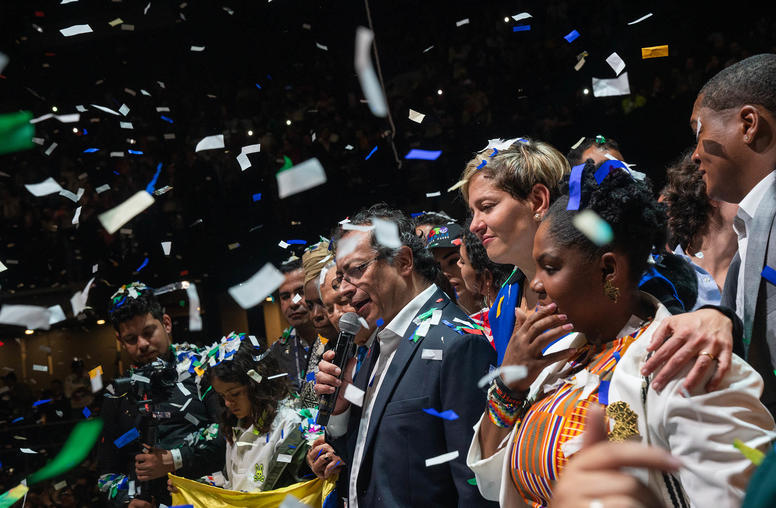