An evenhanded and insightful picture of the obstacles, fiscal incentives, and growing potential for Western oil companies to ameliorate or even prevent conflict in the areas where they operate.

WASHINGTON, DC — Using socially responsible practices, oil companies can lessen international conflict, increase their own wealth, and benefit the environments, economies and living standards of oil-producing countries, according to a new book published by the U.S. Institute of Peace.The price and availability of oil has long made headlines, but both the violent conflict that often exists in oil-rich nations and the potential for energy companies to play a strong role in mitigating that conflict is often ignored, the book contends.

In OIL, PROFITS, AND PEACE (March 2007, United States Institute of Peace Press; $14.95), Jill Shankleman presents an evenhanded and insightful picture of the obstacles, fiscal incentives, and growing potential for Western oil companies to ameliorate or even prevent conflict in the areas where they operate.

Shankleman addresses the gaps in the resources available to industry decision makers, policy makers in oil-rich countries, development program planners, and activists in nongovernmental organizations (NGOs). Specifically, she asks whether investor companies have a responsibility to engage in peacemaking when they invest in conflict zones.

Analyzing findings of academic research on natural resources and conflict, and information from industry and corporate sources about how the oil industry is structured, where it invests, and how decisions are made, Shankleman develops a framework for understanding the links between oil and conflict at both the national and local level.

Drawing on years of field experience and new data from corporations, NGOs, and hundreds of personal interviews, Shankleman spotlights three oil-rich countries—Angola, Azerbaijan, and Sudan—that have had vastly differing experiences with both conflict and corporate social responsibility.

“While oil might be expected to provide the economic means for preventing or resolving conflict or for rebuilding countries that have suffered civil war, the reality is that countries with oil and gas resources are among the world’s most persistent sites of conflict,” explains Shankleman.

OIL, PROFITS, AND PEACE explores this paradox, focusing on the links between oil and gas resources and conflict and considering the potential for, and limits to, corporate social responsibility (CSR) approaches, by which corporations look beyond short-term profits to their wider impacts.

The discovery of oil in developing countries tends to bring as many ills as it does benefits, fueling corruption, oppression, and political and ethnic strife. The results can be grim for the local population and costly for foreign oil companies in terms of disrupted production and lost investment. In response, some major players in the international oil industry have begun adopting CSR approaches intended to make oil exploration a less divisive, less disruptive, and more rewarding business for local communities, thereby helping to prevent or resolve armed conflict.

OIL, PROFITS, AND PEACE is a balanced, innovative and accessibly written book that reveals how the oil industry can effectively aid governments of low-income, resource-rich countries to improve governance, transparency and accountability.

Jill Shankleman is a sociologist by training. She has a long-standing interest in the interaction of economic growth, rural communities, and conflict. She works as a consultant to corporations, international organizations, and nongovernmental organizations, focusing on the social and environmental impacts of large-scale investments in developing countries. During 2003-04 she was a senior fellow at the United States Institute of Peace.

Shankleman is based in Oxford, England and Washington, D.C., but likes to spend as much time as she can in remote communities that are seeking to come to terms with the welcome and unwelcome consequences of having oil-and-gas-industry neighbors. 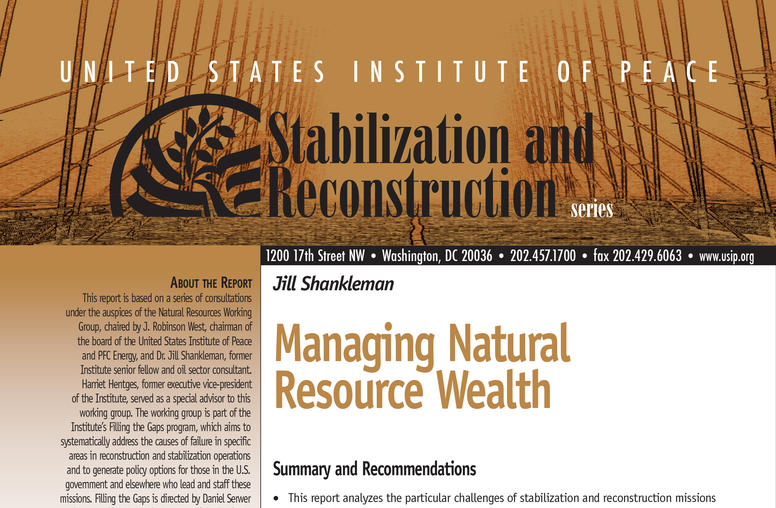 Natural resource-rich countries demonstrate a higher than average risk both of experiencing conflict and of returning to conflict. Jill Shankleman provides lessons from Iraq, Sudan, Angola, Liberia, and Afghanistan. 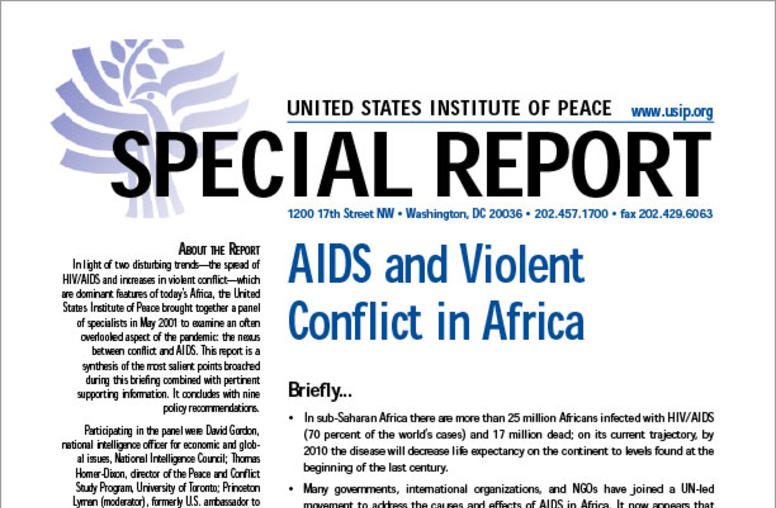 In light of two disturbing trends--the spread of HIV/AIDS and increases in violent conflict--which are dominant features of today's Africa, the United States Institute of Peace brought together a panel of specialists in May 2001 to examine an often overlooked aspect of the pandemic: the nexus between conflict and AIDS. This report is a synthesis of the most salient points broached during this briefing combined with pertinent supporting information. It concludes with nine policy recommendation... 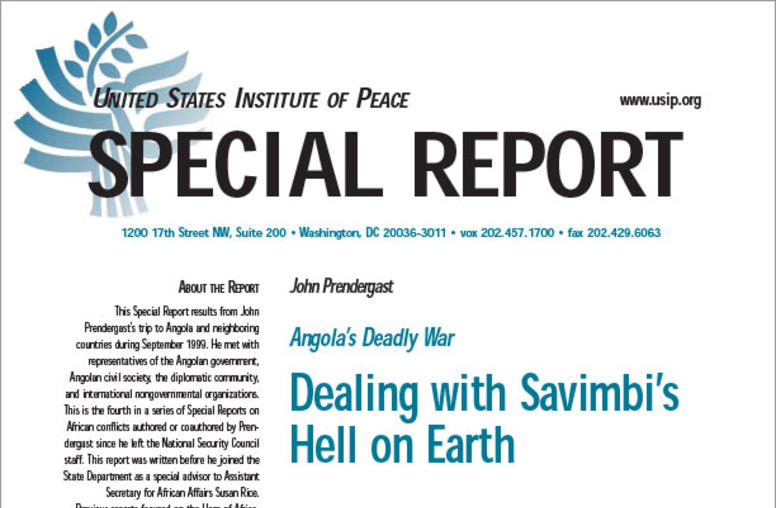 Summary The rebel organization National Union for the Total Independence of Angola (UNITA) has plunged Angola back into a recurring nightmare of war and human rights depredations. Dissatisfied with any scenario in which he is not Angola's president, UNITA leader Jonas Savimbi has chosen war over peace, for the second time this decade.