In our efforts to make this report available to all, the report may be downloaded, reproduced, and translated free of charge. The United States Institute of Peace would appreciate being informed of translations so that we may direct our international readers to the respective versions.

The situation in Iraq is grave and deteriorating. There is no path that can guarantee success, but the prospects can be improved.

In this report, we make a number of recommendations for actions to be taken in Iraq, the United States, and the region. Our most important recommendations call for new and enhanced diplomatic and political efforts in Iraq and the region, and a change in the primary mission of U.S. forces in Iraq that will enable the United States to begin to move its combat forces out of Iraq responsibly. We believe that these two recommendations are equally important and reinforce one another. If they are effectively implemented, and if the Iraqi government moves forward with national reconciliation, Iraqis will have an opportunity for a better future, terrorism will be dealt a blow, stability will be enhanced in an important part of the world, and America’s credibility, interests, and values will be protected.

The challenges in Iraq are complex. Violence is increasing in scope and lethality. It is fed by a Sunni Arab insurgency, Shiite militias and death squads, al Qaeda, and widespread criminality. Sectarian conflict is the principal challenge to stability. The Iraqi people have a democratically elected government, yet it is not adequately advancing national reconciliation, providing basic security, or delivering essential services. Pessimism is pervasive.

If the situation continues to deteriorate, the consequences could be severe. A slide toward chaos could trigger the collapse of Iraq’s government and a humanitarian catastrophe. Neighboring countries could intervene. Sunni-Shia clashes could spread. Al Qaeda could win a propaganda victory and expand its base of operations. The global standing of the United States could be diminished. Americans could become more polarized.

During the past nine months we have considered a full range of approaches for moving forward. All have flaws. Our recommended course has shortcomings,  but we firmly believe that it includes the best strategies and tactics to positively influence the outcome in Iraq and the region.

The policies and actions of Iraq’s neighbors greatly affect its stability and prosperity. No country in the region will benefit in the long term from a chaotic Iraq. Yet Iraq’s neighbors are not doing enough to help Iraq achieve stability. Some are undercutting stability.

The United States should immediately launch a new diplomatic offensive to build an international consensus for stability in Iraq and the region. This diplomatic effort should include every country that has an interest in avoiding a chaotic Iraq, including all of Iraq’s neighbors. Iraq’s neighbors and key states in and outside the region should form a support  group  to reinforce security and national reconciliation within Iraq, neither of which Iraq can achieve on its own.

Given the ability of Iran and Syria to influence events within Iraq and their interest in avoiding chaos in Iraq, the United  States should  try  to engage them constructively. In seeking to influence the behavior of both countries, the United States has disincentives and incentives available. Iran should stem the flow of arms and training to Iraq, respect Iraq’s sovereignty and territorial integrity, and use its influence over Iraqi Shia groups to encourage national reconciliation. The issue of Iran’s nuclear programs should continue to be dealt with by the five permanent members of the United Nations Security Council plus Germany. Syria should control its border with Iraq to stem the flow of funding, insurgents, and terrorists in and out of Iraq.

The United States cannot achieve its goals in the Middle East unless it deals directly with the Arab-Israeli conflict and regional instability. There must be a renewed and sustained commitment by the United States to a comprehensive Arab-Israeli peace on all fronts: Lebanon, Syria, and President Bush’s June 2002 commitment to a two-state solution for Israel and Palestine. This commitment must include direct talks with, by, and between Israel, Lebanon, Palestinians (those who accept Israel’s right to exist), and Syria.

As the United States develops its approach toward Iraq and the Middle East, the United States should provide additional political, economic, and military support for Afghanistan, including resources that might become available as combat forces are moved out of Iraq.

The most important questions about Iraq’s future are now the responsibility of Iraqis. The  United States must adjust its role in Iraq to encourage the Iraqi people to  take control of their own destiny.

The Iraqi government should accelerate assuming responsibility for Iraqi security by increasing the number and quality of Iraqi Army brigades. While this process is under way, and to facilitate it, the United States should significantly increase the number of U.S. military personnel, including combat troops, imbedded in and supporting Iraqi Army units. As these actions proceed, U.S. combat forces could begin to move out of Iraq.

The primary mission of U.S. forces in Iraq should evolve to one of supporting the Iraqi army, which would take over primary responsibility for combat operations. By the first quarter of 2008, subject to unexpected developments in the security situation on the ground, all combat brigades not necessary for force protection could be out of Iraq. At that time, U.S. combat forces in Iraq could be deployed only in units embedded with Iraqi forces, in rapid-reaction and special operations teams, and in training, equipping, advising, force protection, and search and rescue. Intelligence and support efforts would continue. A vital mission of those rapid reaction and special operations forces would be to undertake strikes against al Qaeda in Iraq.

The United States should work closely with Iraq’s leaders to support the achievement of specific objectives—or milestones—on national reconciliation, security, and governance. Miracles cannot be expected, but the people of Iraq have the right to expect action and progress. The Iraqi government needs to show its own citizens—and the citizens of the United States and other countries—that it deserves continued support.

Prime Minister Nouri al-Maliki, in consultation with the United States, has put forward a set of milestones critical for Iraq. His list is a good start, but it must be expanded to include milestones that can strengthen the government and benefit the Iraqi people. President Bush and his national security team should remain in close and frequent contact with the Iraqi leadership  to convey a clear message: there must be prompt action by the Iraqi government to make substantial progress toward the achievement of these milestones.

Our report makes recommendations in several other areas. They include improvements to the Iraqi criminal justice system, the Iraqi oil sector, the U.S. reconstruction efforts in Iraq, the U.S. budget process, the training of U.S. government personnel, and U.S. intelligence - capabilities.

It is the unanimous view of the Iraq Study Group that these recommendations offer a new way forward for the United States in Iraq and the region. They are comprehensive and need to be implemented in a coordinated fashion. They should not be separated or carried out in isolation. The dynamics of the region are as important to Iraq as events within Iraq.

The challenges are daunting. There will be difficult days ahead. But by pursuing this new way forward, Iraq, the region, and the United States of America can emerge stronger. 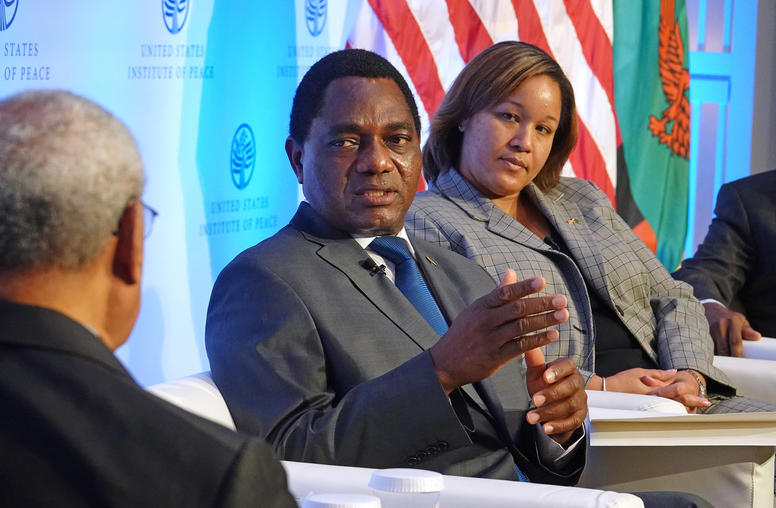