Between May 2019 and September 2020, the United States Institute of Peace convened a bipartisan senior study group to consider the factors that have reshaped the Red Sea arena. The study group determined that, in recent years, the geopolitical and geo-economic dynamics of the Horn of Africa have become tied to the Middle East and broader Indian Ocean in a manner unprecedented in the last century. However, U.S. strategy in this evolving environment has struggled to keep pace with these interconnected, complex, and transregional dynamics and to account for the region’s increased relevance to U.S. interests. The final report of the senior study group defines U.S. interests within a hierarchy of priorities to assist policymakers in calibrating diplomatic, development, humanitarian, and security interventions and provides recommendations for defending and advancing these interests.

In the last five years, the geopolitical landscape of the Red Sea arena has been fundamentally reshaped. The Horn of Africa is now an integral part of and in fact the link among the security systems of the Middle East, the Indo-Pacific, and the Mediterranean by virtue of the strategic importance of and competition for influence over the Red Sea and the states that border and depend upon it for trade and transit. Middle Eastern states are asserting themselves in the Horn of Africa in ways unprecedented in at least a century, and the Red Sea arena is becoming increasingly militarized. As in the eastern Mediterranean, the export of Middle Eastern rivalries into the Horn of Africa—with the United Arab Emirates (UAE), Saudi Arabia, and Egypt contesting Turkey and Qatar for dominance—is fueling instability and insecurity in an already fragile, volatile, and conflict-prone region.

In addition, both Ethiopia and Sudan are navigating the most significant political transitions since the end of the Cold War in which the fundamental assumptions underlying each state’s political structure and governance model are being reexamined and challenged. The transitions in Ethiopia and Sudan present an opportunity to set the region on a transformative new trajectory toward reform and stability, yet they also carry a risk of state failure that, given these states’ combined population of more than 150 million, would send a tidal wave of instability across Africa and the Middle East.

The protest movements that catalyzed the transitions in Ethiopia and Sudan illustrate a demographic explosion in which an entire generation is coming of political age and questioning the credibility, legitimacy, and efficacy of their governments in meeting their aspirations for basic security and economic prosperity. This is set against the population estimates that project the Horn of Africa will grow by 44 percent in the next fifteen years and by 87 percent in the next thirty. And though the full extent of the health impact of the COVID-19 pandemic is as yet unclear, the Horn of Africa’s extant vulnerabilities suggest that the pandemic could result in lasting damage.

Although U.S. military commitments, security investments, and humanitarian and development assistance remain significant, the United States has been withdrawing from its role as the dominant external political power in the Red Sea arena. In this environment, the United States needs a new strategic framework to successfully advance and defend its interests. This study recommends four pillars that should comprise such a framework.

Four Pillars of a U.S. Strategic Framework for the Red Sea Arena

In recent years, the geopolitical and geo-economic dynamics of the Horn of Africa have become tied to the Middle East and broader Indian Ocean in a manner unprecedented in the last century. U.S. strategy in this evolving environment has, however, struggled to keep pace with these interconnected, complex, and transregional dynamics and to account for the region’s increased relevance to U.S. interests.

Between May 2019 and September 2020, the United States Institute of Peace convened a bipartisan senior study group to consider the factors that have reshaped the region, referred to here as the Red Sea arena; to define U.S. interests within a hierarchy of priorities to assist policymakers in calibrating diplomatic, development, humanitarian, and security interventions; and to provide recommendations for defending and advancing these interests. The most critical challenges in the region will require multilateral responses bolstered by the appropriate, region-led multilateral architecture, but only U.S. leadership can ensure that effective solutions are brought to bear in responding to shared political, economic, and security threats.

The Final Report and Recommendations of the Senior Study Group on Peace and Security in the Red Sea Arena considers the region as a shared political, economic, and security ecosystem comprised of the eight states of the Horn of Africa (Djibouti, Ethiopia, Eritrea, Kenya, Somalia, South Sudan, Sudan, and Uganda) and the states of the Middle East whose intensifying engagement is one of the most significant developments affecting the region (Egypt, Israel, the Gulf states, and Turkey). The term “arena” is used to connote both the transregional nature of this geopolitical ecosystem and the heightened militarization and competition among state actors that increasingly defines it. 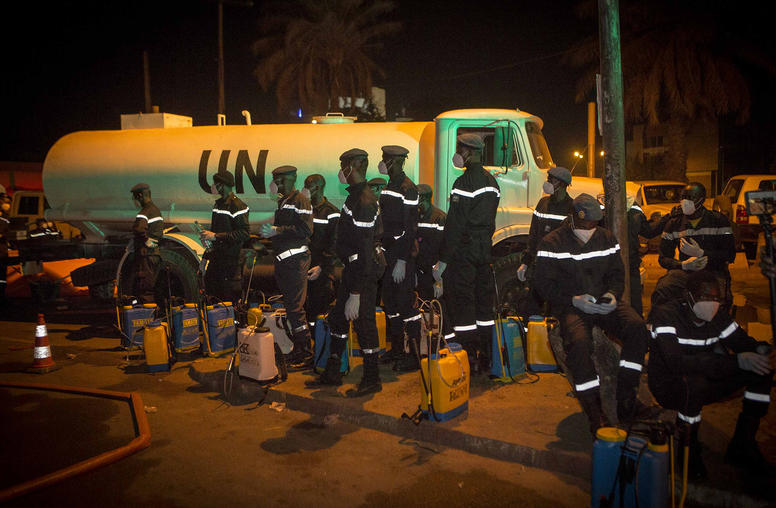