Last week, India made a controversial decision to revoke the special status of the disputed region of Kashmir and sent thousands of troops to quell any potential unrest. The Muslim-majority territory has been a major source of tension between India and Pakistan since it was partitioned between the two countries (the Indian side is known as Jammu and Kashmir) in 1947. Indian Prime Minister Narenda Modi’s move prompted loud protests from Pakistani Prime Minister Imran Khan and other Pakistani leaders and increased tensions between the two nuclear powers. Meanwhile, the voices of Kashmiris have largely been unheard, as government authorities cut off almost all communication from the area. USIP’s South Asia experts discuss what led India to make this decision now, how Pakistan has responded, and what the U.S. can do to help mitigate tensions.

What led to India’s decision to remove Jammu and Kashmir’s special status? What’s going on there now?

Singh: Though there is some question about the precise timing, the Modi government had long planned to change Kashmir’s status in an effort to integrate the restive region. Modi and his Bharatiya Janata Party have long viewed Kashmir’s exemption from several provisions of the Indian constitution as an obstacle to stability and development that facilitated extremism and terrorism.

India views this decision as a strictly internal matter, but concerns about some developments in the region may have been a factor in the timing. In particular, accelerating U.S. efforts to broker a peace deal with the Taliban and withdraw from Afghanistan remind Indian leaders of the Pakistan-backed insurgency that erupted in Kashmir in the early 1990s after the Soviet Union left Afghanistan. Leaders in Delhi believe Pakistan will again ratchet up the pressure through Kashmiri proxies when the Taliban return to Afghanistan (whether under a peace deal or after a U.S. withdrawal). Making Kashmir a union territory is seen as a way to remake politics there and help manage any increase in extremism. To bolster the legitimacy of their decision, the Modi government sought and received parliamentary approval with more than a two-thirds majority in both chambers.

In terms of the situation now, the Indian government took unprecedented security measures along with the announcement. These included evacuating tourists; cutting of phone, internet and television service; instituting curfews; and preemptively detaining an unknown number of residents including current and former political leaders. The government claims these steps were needed to protect human life and prevent anything like the violence that claimed dozens of lives in 2016. Many Indian media outlets are reporting from Kashmir and showing calm, including on Indian Independence Day. Average Kashmiri citizens and their detained leaders, however, can mostly not be contacted.

The Indian Supreme Court delayed any action on a claim that the move is unconstitutional for two weeks. Whether the government can normalize the situation and lift the extraordinary security measures will be a key indicator of how their dramatic action will actually play out. While engaging in substantial diplomatic efforts to explain the move to neighbors, Indian leaders have mostly ignored Pakistani complaints.

How has Pakistan responded?

Cookman: Pakistani leaders from across the political spectrum have harshly condemned India’s move to revoke Kashmir’s special constitutional status, describing it as a violation of U.N. Security Council resolutions meant to govern the territory’s disputed status. Prime Minister Khan and top military leaders have huddled several times to plan Pakistan’s response, and have issued multiple statements denouncing the Modi government’s actions and vowing to counter it.

Khan has raised warnings about a heightened risk of war and terrorism, but has placed the onus on India, accusing it of seeking to scapegoat Pakistan for the domestic reaction within Kashmir to its own internal crackdown, and denying that Pakistan would seek to initiate a conflict. Indian officials in turn have justified their move in part as a response to Pakistan-sponsored militancy in Kashmir. Cross-border exchanges of fire between the two militaries along the Line of Control have been ongoing, although thus far not at levels indicating dramatic new mobilizations.

So far, the overt Pakistani response has primarily been symbolic or diplomatic in nature. Public statements by Khan and other civilian and military leaders appear aimed as much for foreign consumption as domestic, as Pakistan seeks to mobilize international support and avert a fait accompli change in the status quo by its larger neighbor. Khan and other foreign ministry officials have reached out to a range of allies to seek support, including China, the Organization of the Islamic Conference, and the U.S. and U.K. China has supported Pakistan’s call for a closed-door U.N. Security Council meeting on the issues.

Meanwhile, Pakistan has downgraded diplomatic ties with New Delhi, recalling its ambassador and blocking the posting of his Indian counterpart. It has also cut rail links and imposed partial overflight restrictions, and suspended bilateral trade; although the volume involved was minimal from the perspective of both economies, closer trade linkages have often been cited as a potential avenue for the eventual normalization of relations.

What role can the U.S. play in de-escalating tensions over the standoff on Kashmir?

Olson: As the U.S. has recently learned the hard way, the possibilities of a formal mediation of the Kashmir dispute are virtually nil, since India denies that there is any international dimension to the dispute and rejects any third-party role. Public posturing notwithstanding, Pakistan understands that adamant India opposition makes a visible U.S. role impossible. Any more public offers of mediation would simply undercut whatever credibility the U.S. retains.

Given that reality, the first priority for U.S. policymakers and diplomats is to make clear to Pakistan that it should resist any temptation to support proxy forces in cross border attacks. In fact, the U.S. should urge Pakistan to continue its crackdown on Lashkar-e-Taiba and other militant groups pointing out that any retrogression will have a severe impact on both bilateral ties—which are gradually improving—as well as support for Pakistan in multilateral financial institutions. These demarches will be complicated by the ongoing need to also support a peace process in Afghanistan, which Pakistan rightly perceives gives them leverage over the U.S. Nonetheless, the need to avoid a possible clash between nuclear power states requires the U.S. to take a strategic view and push Pakistan to eschew proxy warfare on both fronts.

That said, given the inflamed situation in the Kashmir Valley and despite U.S. pressure, it is likely that there will be violent attacks, and some may be traced back to militants based in Pakistan. Should such an outrage occur, Washington should not shy away from its traditional role as the de facto crisis manager; the U.S. should play a quiet “good offices” role to urge de-escalatory actions on both sides and press Pakistan to rein in violent actors. This requires low-key diplomacy at a local level, coordinated between our embassies in Islamabad and Delhi supported by Washington. Over time, such quiet diplomacy might facilitate some kind of a discreet back-channel dialogue between Islamabad and Delhi. 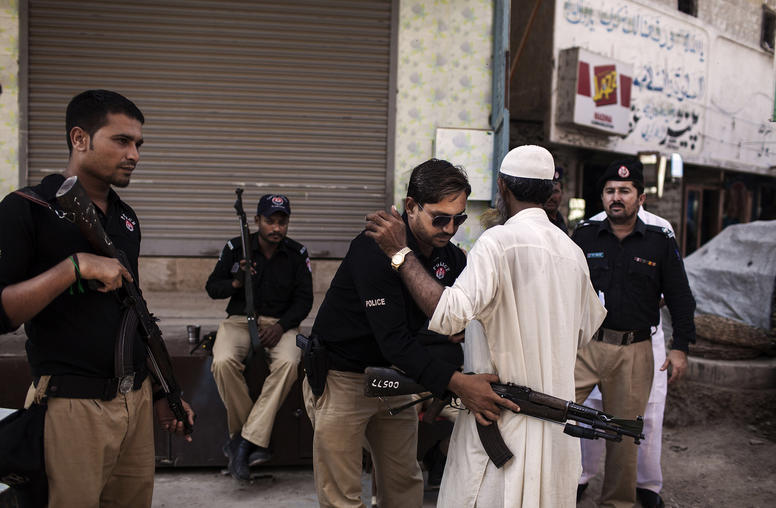