It’s been two months since longtime Algerian dictator Abdelaziz Bouteflika resigned following weeks of mass protests. But, Algeria’s protest movement has continued to maintain pressure on the army, which is overseeing a 90-day transitional period. Protesters have even recently called for the resignations of interim President Abdelkader Bensalah and Prime Minister Noureddine Bedoui, who were appointed by Bouteflika days before his resignations. With elections scheduled for July 4, what’s next for Algeria? USIP’s Thomas Hill looks at what the protesters want, if an election can satisfy their demands, and the regional implications of Algeria’s continued unrest.

Although longtime President Abdelaziz Bouteflika resigned on April 2, Algeria’s protests have continued unabated. What is the reason for the standoff between protesters and the interim government?

Since the beginning, protesters have called for a complete overhaul of the political and economic elite —often referred to as “le système”—following decades of corruption and poor government performance. Peaceful demonstrations have resulted in significant achievements: President Bouteflika resigned after six weeks; two former prime ministers and eight cabinet ministers are being prosecuted for corruption; major business leaders like Issad Rebrab (Algeria’s richest man), Ali Haddad and members of the Kouninef family have been arrested; and, President Bouteflika’s brother (Saïd) and two former intelligence chiefs have also been arrested.

These high-profile purges were achieved with relatively little effort by the street protesters, further fueling the demand for reform. Now the protesters are calling for the resignations and prosecution of interim President Bensalah, Prime Minister Bedoui, and Army Gen. Gaid Salah. If security services and the military allow it, the protesters will not stop their calls for reform until all the members of “le pouvoir” are behind bars.

Gen. Salah has been the public face of the transition and pushed very hard to maintain the July 4 election date. But that date appears to be impossible logistically and deeply unpopular with the street; many people believe the elections will be postponed. If these elections are postponed, it will be another victory for the street protesters and blow to Gen. Salah. If Gen. Salah feels threatened by this public rejection, violent confrontations between the army and the street protesters could increase.

Some observers have warned that hardline Islamists may try to exploit the uncertainty—as they did in the 1990s—to gain power. What role have Islamist parties played in the protest movement? Are these fears justified?

Thus far, Islamists have not featured prominently in the protest movement. In early May, a small group of supporters of Ali Belhadj (one of the founders of the Islamic Salvation Front or FIS) were seen taking part in the street protests. But other than a few sporadic displays, the FIS remains underground, in prison, or in exile.

More moderate Islamic political parties like the Islamist Movement of Society for Peace (MSP) and the Islamist Justice and Development Front (MRN) were both engaged in the political process under President Bouteflika. Abderrezak Makri, the leader of Algeria’s largest Islamist party, the MSP, has supported the removal of President Bouteflika and other high-profile members of “le pouvoir,” referring to them as a “mafia” but warned against removing Gen. Gaid Salah.

Street protesters—perhaps signaling that Islamist parties have been compromised or co-opted by their prior engagement in the politics of the Bouteflika era—have openly jeered leaders of the Islamist Justice and Development Front (FJD) and the MSP.

Nevertheless, many observers fear that Islamist groups may return to the political scene, exploiting the political uncertainty and using force to gain an advantage. It’s certainly an area worth watching but at this point, there seems to be no real appetite in the Algerian public for the Islamist parties in general, either at the extreme (FIS) or more moderate (MSP, MRN, FJD) ends of the political spectrum.

Algeria’s army is overseeing the transition and has promised to hold presidential elections on July 4. But there appear to be no credible candidates. Can the election be held on July 4? Could it ease the country’s political crisis?

It seems increasingly unlikely that Algeria will hold presidential elections on July 4. Algerian press, such as El Watan, has said that “the election … will without any doubt be postponed or canceled.” To date, only two candidates have announced their intention to run for the presidency. Both are political unknowns: one is an aeronautical engineer and the other runs a veterinary drug company. Several mayors and local magistrates have already said they would not support elections on July 4.

Gen. Salah has repeatedly made the argument that elections are the best path for the Algerian people out of the current political crisis, but that argument does not appear to have support with the protesters. Certainly, early elections favor parties and candidates that are established and probably benefitted from the Bouteflika-era political system. The protesters surely realize that postponing the elections will allow for new (and younger) opposition candidates to emerge—presumably with new ideas about the appropriate social contract between the state and the people.

Since Bouteflika’s resignation, another North African dictator—Omar al-Bashir in Sudan—has been deposed. Could Algeria’s protests spill over into other countries in the region like Morocco or Libya?

I don’t think there will be “spillage” from Algeria into neighboring countries, in part, because what we see today in Algeria is really a continuation of the popular unrest that was unleashed in 2011 in Tunisia—the so-called “Arab Spring.” People often forget that Algeria also experienced popular protests in 2011 but the Bouteflika regime bought peace through increased government subsidies and promises of expanded social freedoms. Those promises raised expectations that could not be met when the global price of petrol dropped, and the Algerian government no longer had the financial ability to sustain burdensome subsidy programs.

The anger and frustration that manifested first in Tunisia in 2011 is felt throughout the Middle East and North Africa. Algeria and Sudan are simply the most visible examples today, but they are by no means unique. Morocco continues to deal with similar popular unrest albeit on a much lower scale but the potential for something more significant exists. Libya has struggled to find its footing since the ouster of Muammar Qaddafi and the collapse of the Libyan Political Agreement (LPA) post 2015; I don’t think Libya is likely to experience any influence from events in Algeria unless Algeria’s political troubles lead to violence and subsequent forced migrations.

Indeed, the places that are most closely watching Algeria are in the Gulf where there is a real fear about what democracy means in the Arab world. The rise of political Islam in Algeria would probably be perceived as a threat by many Gulf states but, as discussed above, Islamist parties in Algeria appear to be on the outside looking in at the moment.

Algeria’s Constitutional Council announced over the weekend it would cancel elections planned for next month in response to demands from protesters. Although such delays are often criticized, there are often good reasons to postpone an election in countries at risk of violent conflict. The security situation may complicate the logistics or put poll workers and voters at risk; heated campaigns may risk escalating communal tensions and endanger candidates; or conditions for a fair campaign may simply not be in place amid a state of emergency. At the same time there are risks associated with postponing a voting process. Along with Algeria, other recent examples from Afghanistan, Libya, and the Democratic Republic of the Congo highlight this dilemma. 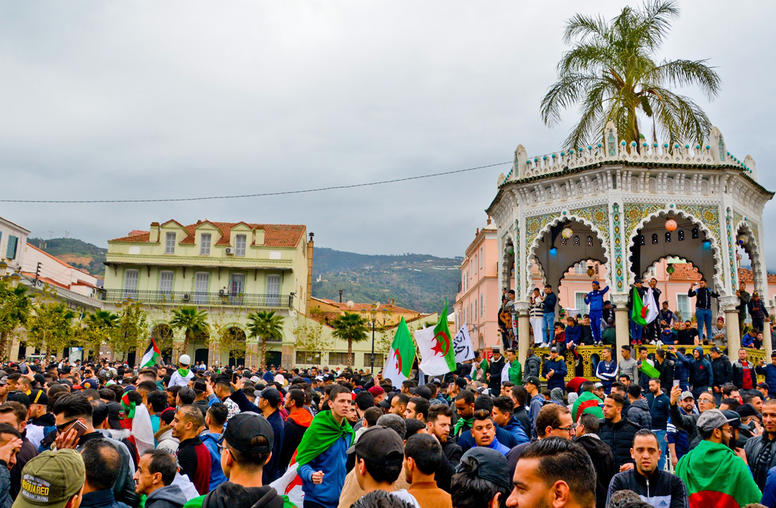