Since the Singapore Summit, Washington and Pyongyang have been mired in a stalemate over the sequencing of an end of war declaration and North Korea’s disarmament. Yet, even after the cancellation of Secretary Pompeo’s visit, USIP’s Frank Aum says talks will likely continue, as both sides are invested in a successful outcome.

Tim Farley (Host): As you probably know, President Trump decided to cancel Secretary of State Mike Pompeo's trip to Pyongyang. We heard from Heather Nauert yesterday at the State Department.

Heather Nauert: There is progress being made. The [crosstalk 00:00:35] Secretary's not just hopping on a plane, and flying to North Korea for his health. He is going there to have serious substantive talks.

Tim Farley (Host): What should we read between these particular lines? Joining us on POTUS is Frank Aum, senior expert on North Korea. He has joined the United States Institute of Peace. He came there from the U.S. Korea Institute of John Hopkins University, and also had served as a senior advisor for North Korea in the Office of the Secretary of Defense, under President Obama, advising four secretaries of defense on issues related to Northeast Asia and the Korean Peninsula. Twitter handle, by the way, @usip. Frank Aum, welcome. Thank you for being here today.

Tim Farley (Host): Is this just a sort of another example of the kind of behavior that we have come as a nation to expect from North Korea? Or is this different?

Frank Aum: Oh, well, it's very similar to North Korea's past tyrant behavior, but you have to remember that, you know, since President Trump and Kim Jong Un met in Singapore over two months ago, the U.S. and North Korea had been mired in a stalemate. And the stalemate is this: North Korea wants Washington to take the first move, in terms of doing something that'll show that there's a better relationship between two countries. And what they're looking for is a end-of-war declaration to say that the Korean War is over.

On the other hand, Washington wants North Korea to take the first move, take some major disarmament action that will signal that North Korea is serious about the denuclearization. So there has been a bit of a stalemate about what each side concedes, and who goes first.

And so what happened was that Secretary of Pompeo's counterpart in North Korea had sent him a letter suggesting that, you know, North Korea is gonna adopt a very tough bargaining position. And so, I think, President Trump decided that, "Hey, that maybe it's not worth it for Secretary Pompeo to go to North Korea this time." And so this move is very similar to what happened before the Singapore Summit, where President Trump canceled it to try to gain some quick leverage, and eventually the summit happened anyways.

Tim Farley (Host): You make it sound like these two are like dealers of some sort. "I'm handing you the cash. You're handing me the paper." But who hands it first, you know? "Do you get the cash before I get the paper? Or the paper before the cash?" I wonder, does the U.S. have a problem with ending that war, declaring it over? Or is it just symbolic in that the U.S. doesn't wanna be taking the first move?

Frank Aum: Well, that's a very good point. So, there has been internal debate within the U.S. Government about what an end of war declaration would mean. Some people say that it doesn't mean anything, because the war has been effectively over for decades, and so we're just making a non-binding, political statement that confirms the reality of the end of the war.

On the other hand, there's other people in the government who are very concerned, because they feel like this sort of declaration would open the door to undermining our security position in South Korea, in the region. There may be some, maybe North Korea or China could use an end-of-war declaration to say, "Hey, if the war is over, why are there U.S. troops still in Korea? Why is there still a United Nations command?" And so that is what some people in the U.S. Government are worried about, that this could be a slippery slope to undermining our position there.

Tim Farley (Host): To the point you're making, yesterday we did hear from the Secretary of Defense, James Mattis, who said that, you know, there's no plans right now for any suspension of military actions or exercises.

James Mattis: We took the step to suspend several of the largest exercises as a good-faith measure coming out of the Singapore Summit. We have no plans at this time to suspend any more exercises.

Tim Farley (Host): Frank Aum, is it your sense that the United States is sending a unified message to North Korea on these negotiations?

Frank Aum: Yes. And so what Secretary Mattis was referring to is the U.S. and South Korea conduct joint military exercises throughout the year, but there's two major ones: One in the spring, and one in the fall, or the one in August. The one in August was canceled, or suspended, and that allowed the negotiations to move forward. But what Secretary Mattis was saying is that the one in the spring, and takes place usually around March, Foal Eagle and Key Resolve. It's a major exercise where lots of troops go onto the Peninsula, and practice operations and military plans. That has not yet been suspended.

And so what he is suggesting is that if North Korea continues to maintain an obstinate behavior, and doesn't take these concrete steps toward denuclearization, then those exercises in the spring could be back on. And that would be very irritating to North Korea.

Tim Farley (Host): Now how does South Korea figure into ... How do they figure into all of this discussion right now?

Frank Aum: So, South Korea has been kind of moving forward with progress on inter-Korean cooperation and relations. They also are very supportive of the end-of-war declaration. They feel like that could help improve the ... or reduce tensions on the Peninsula, and be the key that unlocks the diplomatic negotiations.

So, I think South Korea is very frustrated by the stalled negotiations because it doesn't allow them to move forward with their own inter-Korean cooperation. And also, that the goal of the current end of war to the Korean ... an end to the Korean War by the end of the year is very much in jeopardy. So, I think President Moon of South Korea is gonna have a summit meeting with Kim Jong Un in Pyongyang some time in early to mid-September. And so I think that meeting will hold greater significance in getting the US and North Korea back on track.

Tim Farley (Host): And is China playing into this at all? Or would they actually like to see the U.S. and North Korea have more negotiations? Or do they oppose that?

Frank Aum: Yes, China is very much is support of negotiations and diplomacy. They are supportive of reducing tensions. They're aligned with the U.S. in terms of seeking the denuclearization of North Korea. But while they're aligned with North Korea on that ultimate goal, they're more supportive of North Korea's preferred process of how we get there. So China also wants the U.S. to take the first action, to provide the first concession. They argue that, you know, the U.S. is the bigger country, so they should be the one that takes more risk in, you know, providing reassurance to North Korea.

So, they are aligned with us in that sense. But I think China's frustrated more because of President Trump's willingness to link issues like the U.S.-China trade sanctions with the North Korea issue. They don't think that's helpful.

Tim Farley (Host): Finally, on the optimism/pessimism scale, if pessimism is a 0, optimism is 100, where are you on that scale, referencing the U.S. and North Korea, and moving forward with these negotiations?

Frank Aum: Well, if it's just moving forward, I would say maybe a 50? 50/50 in terms of moving forward. I feel like we're maybe in a similar situation to what happened before the Singapore Summit, where there's, you know, a little bit of jostling, and hard-ball tactics. But eventually because both North Korea and the United States are invested in a successful outcome, I think that the negotiations will move forward at some point.

Now, if you're talking long-term about a more successful outcome, where we actually see North Korea's denuclearization, I would say maybe a score of 1.

Tim Farley (Host): Oh, wow. Okay. Frank Aum, who has been in the seat watching these closely through a couple of administrations. Frank Aum, thank you for joining us on POTUS today. 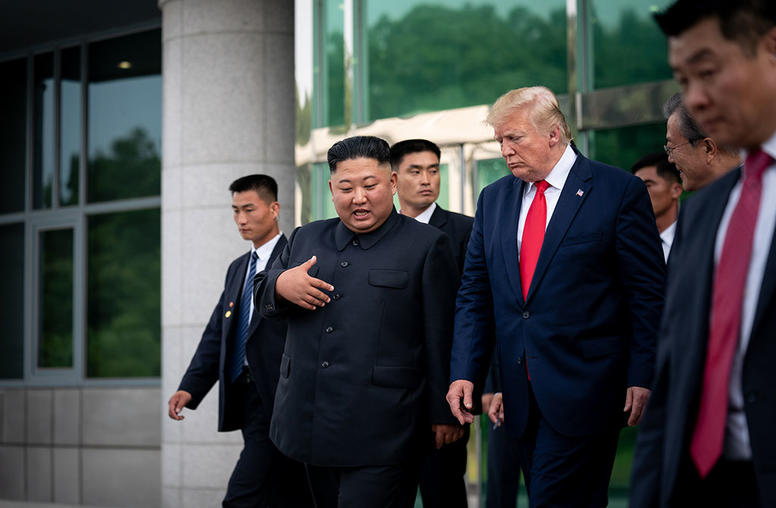