Liberian President Ellen Johnson Sirleaf called on the U.S. to maintain its position of world leadership, a role that she said rescued her country from a ruinous civil war and an outbreak of a terrifying, deadly disease.

Days before an election that will end her 12 years as Liberia’s president, Sirleaf urged the U.S. not to allow a void of global leadership to develop that will be filled by “disrupters.” Liberia’s experience in ending a brutal internal conflict and staunching the spread of the Ebola virus demonstrates what can be accomplished by a united world community, led by sustained and bipartisan U.S. support, she said.

The world faces challenges that include “transnational threats, rogue nations equipped with the most sophisticated weapons, millions of stateless families fleeing their homelands in search of security and economic opportunity, and our planet screaming for us to protect it,” Sirleaf said. “America’s leadership is needed today, more than ever.”

Sirleaf also singled out America’s democratic values as being of great importance and inspiration to the people of Liberia and to others across Africa.  “The dream of America is alive in the hearts all people who strive for freedom and a better way of life,” she said.  “Continue to be a champion.”

The president, who delivered her remarks in a public event at the U.S. Capitol Visitor Center on Sept. 25, will step down in January, after two terms. In her speech, she said, “I respect our constitution, and am making way for new leadership.”

America’s leadership is needed today, more than ever.

The scheduled Oct. 10 election is expected to be peaceful and will bring about the first orderly, democratic transfer of power in Liberia since 1944. Sirleaf, who won a Nobel Peace Prize in 2011 for her role in bringing peace to Liberia and defending the rights of women, was elected in 2005 after 14 years of chaotic violence that left a quarter of a million dead and the country in ruins.

Her address was co-hosted by the U.S. Institute of Peace, the International Republican Institute, the International Foundation for Electoral Systems, the National Democratic Institute and the National Endowment for Democracy. Representative Ed Royce, a Republican of California, the chairman of the House Foreign Affairs Committee and Senator Chris Coons, Democrat of Delaware, the ranking member of the subcommittee on African affairs, were the honorary hosts.

Royce saluted Sirleaf, the first female elected president of an African nation, for “dogged determination and bravery that made her a mentor for women not only in Africa but all over the world.”

Sirleaf, 78, reprised Liberia’s record under her administration, crediting bipartisan U.S. congressional and presidential backing for helping put Liberia on the road to recovery after she took office.

Less than two years earlier, a three-way civil war, marked by brutal warlords and child soldiers, had ended after international peacekeeping forces, bolstered by 200 U.S. Marines, established security in the capital Monrovia and President Charles Taylor fled the country. As part of the deal to end the fighting, a Governance Reform Commission was set up in June 2003. Sirleaf chaired the panel until she ran for president.

“It was President George W. Bush who, in August 2003, told the world ‘Enough is enough’ and demanded that warlord Charles Taylor leave,” Sirleaf said. By sending the Marines, Bush “enabled the peace and created the space for democracy. It was this opening which permitted my candidacy and, ultimately, my presidency,” she said.

Taylor was convicted of crimes against humanity by the United Nations-backed Special Court for Sierra Leone at the Hague and is serving a 50-year sentence.

Two months after her inauguration, in March 2006, Sirleaf addressed a joint session of the U.S. Congress. Liberia was a failed state in such total collapse that streetlights and water pipes in Monrovia had been ripped out for their raw materials and roads were impassable, she recalled.

Rebuilding Security and Rule of Law

Over the subsequent nine years, the U.S. supported rebuilding of the armed forces and training of police and other security elements. Americans provided technical assistance to strengthen the rule of law and corruption-fighting institutions, she said. The U.S. supported education, invested in healthcare delivery and sustainable agriculture, and helped rebuild infrastructure.

She counted among her accomplishments returning children to school, reforming the civil service, increasing regional integration and establishing mechanisms to coordinate assistance from international non-governmental organizations.

The next year, the country was struck by the twin shocks of the Ebola virus and a collapse of global commodity prices. Growth plunged to zero and Liberia confronted a disorienting crisis with an infectious disease that eventually killed more than 4,000 people in a population of about 4 million. Once again, a U.S. president came to Liberia’s defense, Sirleaf said.

President Barack Obama “took the bold decision, in the face of fierce domestic opposition, to deploy the men and women of the United States military to build a logistical bridge, which helped Liberia fight and contain the disease,” she said.

Today, Liberia’s recovery is on course, she said. The growth rate has climbed to 3 percent while programs for education, electrification, transportation and entrepreneurship advance, Sirleaf said.

“We left our mark,” the departing president said in self-assessment. “We have maintained the peace. We have built a foundation for democracy, economic development and the rule of law. We have given voice and hope to the market women, the girl child and to civil society. The next president will inherit an empowered people. Africa knows what a woman president can do,” she said.

Still, Liberia remains one of the world’s least-developed countries, with a per capita GDP of about $450. Sirleaf’s critics also note persistent corruption and inequality, and her decision, though within the bounds of the constitution, not to step down after one term as had been recommended by the Truth and Reconciliation Commission.

But Coons said he witnessed Sirleaf’s leadership during her second inaugural in Monrovia. In a brief speech delivered in oppressive heat, Sirleaf said she respected democracy and that this term would be her last. Spotting opponents who had not accepted the election results, Sirleaf challenged them to come forward from the crowd and embrace her in democratic unity, Coons recalled.

“There was a long and awkward silence before a group of humbled bush fighters and opponents slowly made their way forward, as if they’d been called out by a school principal, and gave you hugs,” Coons said to Sirleaf. “The place erupted in cheers,” Coons said.

“That simple act of risk, of opening your arms to an opponent, of making yourself vulnerable, transformed a moment [in which] you could have celebrated victory over vanquished opponents to one, instead, where the people of Liberia won.”

Kenya and Liberia held elections in 2017 that were closely watched by the international community, as both countries’ history of violence led to fears over election security. Although Liberia’s election was largely peaceful, Kenya’s was marred by intense violence. What worked in preventing election violence in Liberia that didn’t work in Kenya?

Drawing on extensive field research in Kenya and Liberia around the 2017 elections in those countries, this report uses local survey data to evaluate the effectiveness of seven prevention measures thought to reduce the risk of election violence. Its recommendations, directed primarily to the international community but offering...

The day after Christmas Liberians went to the polling stations to elect George Weah, a former international soccer player, as the new President of Liberia. Weah beat the former vice president and chief opponent, Joseph Boakai, in a run-off election. The risk of election-related violence was substantial given... 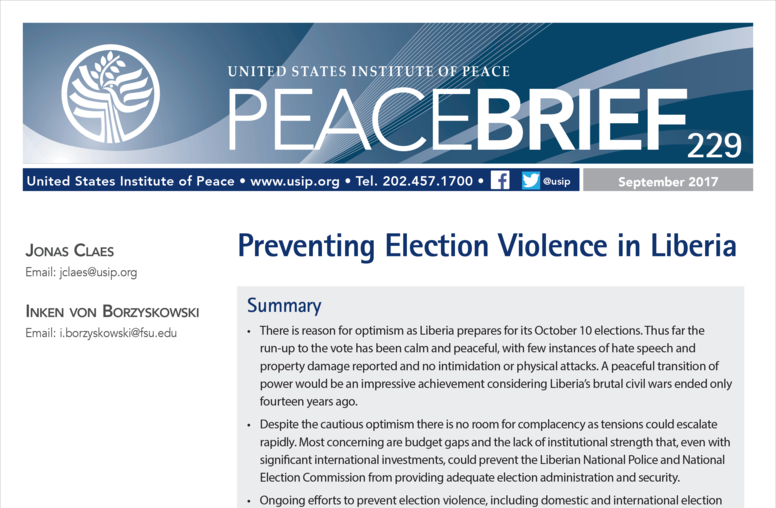 Liberia will hold presidential and legislative elections on October 10. The run-up to the vote has been primarily peaceful, and the country has engaged in ongoing efforts to prevent election violence. This Peace Brief, based on USIP research, assesses the risk of election violence and the scope of violence prevention efforts, and provides recommendations for ongoing prevention.