Good afternoon and thank you to the House Foreign Affairs Subcommittee on Europe, Eurasia and Emerging Threats Chairman Rohrabacher, Ranking Member Keating, and other members of the Subcommittee for this opportunity to testify before you today.

My name is Dr. Kathleen Kuehnast. I am a socio-cultural anthropologist and an expert on the Central Asia country of Kyrgyzstan, where for over a decade I worked as a social scientist for the World Bank, focusing regionally on Central Asia and thematically on conflict prevention. My comments here today derive partially from various studies I did in that capacity on the topic of water and border management, and more recently as director for gender and peacebuilding at the United States Institute of Peace (USIP). I have recently published a USIP report on the potential for violent extremism in Kyrgyzstan. The U.S. Congress created the Institute 30 years ago with a mandate to prevent, mitigate and resolve violent conflicts around the world. The Institute does so by engaging directly in conflict zones and by providing analysis, education and resources to those working for peace. USIP experts work on the ground in some of the world’s most volatile regions, collaborating with U.S. government agencies, non-governmental organizations, and local communities to foster peace and stability.

The views I express today are solely my own and do not represent those of the United States Institute of Peace, which does not take policy positions.

This is an important hearing on how disputes over water sharing or water management contribute to regional hostilities. My comments will focus on the everyday use and contestation of water in Central Asia between the upstream countries -- Tajikistan and Kyrgyzstan and the downstream countries—Uzbekistan and Turkmenistan. Since the early 1990's, the Soviet system of management has fallen apart and now water is a major source of tension and instability. I also offer details of these situations and present some policy considerations for how the U.S. government, including Congress, can help diffuse and resolve these impasses.

I will emphasize three points related to Central Asia and water issues:

Water is wasted daily as the result of its Soviet-era unsustainable water practices, deteriorating infrastructure and two decades of state-centric power struggles, mismanagement and corruption.

According to World Bank estimates from 2005, water use in Central Asia is as high as 12,900 cubic meters per hectare, but only 21 percent of this is used effectively. The remaining 79 percent is lost to unlined canals and irrigation inefficiencies [UNEP, Environment and Security: Transforming Risks into Cooperation. 2005]. This compares with roughly 60 percent loss in developing countries. A recent report in the science journal Nature found that on average, a person in Turkmenistan consumes four times more water than an average American, and 13 times more than a Chinese citizen [NATURE, VOL 514. 2 OCTOBER 2014].

Access to water is one of the most contentious local issues in Central Asia today. The competition for water is fierce, particularly in the densely populated Fergana Valley, split between Kyrgyzstan, Tajikistan, and Uzbekistan. The valley has some of the most extensive irrigation systems in the world, serving approximately 22 million people dependent on irrigated agriculture.

The Soviet regime left an integrated water system of dams, pumping stations and canals for irrigation and energy generation. The centralized state enforced clear rules for water allocation among the Central Asian republics in order to support extensive cotton production for the entire USSR. Top-down Soviet water management may have minimized conflict, however, it intensely ignored the environmental, social and economic aspects of natural resource management [Kuehnast et al. WB 2008].

With aspirations of creating an oasis in the deserts of Central Asia, Soviet practices from the 1950s onward included growing cotton, rice, and potatoes, all of which are water intensive crops and some are particularly damaging to the soil, which I would add cannot be left out of the water management equation. In the post-Soviet era, the individual countries have recalibrated their policies and behaviors following the termination of Soviet-styled subsidies.

The United Nations Environment Programme [2005] estimated that the creation of the Central Asian states in 1991 meant that 98% of Turkmenistan’s water supply and 91% of Uzbekistan’s originate outside their borders.

Without a central coordinator and enforcer, it is difficult, if not impossible, to maintain canals, pumping stations, irrigation facilities, dams and reservoirs in the region in a way that promotes efficient water management.  For instance, the water-energy nexus evolved in the neighborhood of Central Asia, where the upstream countries, dependent on insufficient hydro power, especially in winter, were then traded gas-powered electricity generated in Uzbekistan and Turkmenistan at subsidized prices. This arrangement allowed the upstream countries to meet their winter energy needs and therefore conserve their water reserves, which would be released for irrigation in the downstream countries during the summer. The breakdown of the subsidy regime after the collapse of the Soviet Union led upstream countries to release water in winter to generate power, meaning that less of it was available during the spring and summer for irrigation.

This is not a friendly neighborhood.

Many local people feel that the roots of the water crisis rest in the lack of comprehensive, coordinated decision making by Central Asian governments. On the other hand, even when inter-governmental agreements are made, they are often not enforced locally.

At the heart of this competitive, one-upmanship is the problem of the upstream countries of Kyrgyzstan and Tajikistan with a combined population of about 10 million, wanting to build large hydropower plants that need huge reservoirs to meet their energy needs in the absence of an integrated energy and water system. Downstream is Uzbekistan with over 27 million people, wanting the same water for irrigation of crops in the spring and summer. Instead the result has been for many in the Fergana Valley rising ground water and waterlogging, both leaving a massive rodent problem, along with disease.

Why hasn’t there been more conflict?

The international community should take into account the historical and socio-cultural practices that have prevented violence and conflict.  Two decades after the collapse of the Soviet Union, the factors that have kept the regional tensions from spilling over may no longer hold.

Experts have repeatedly predicted that interethnic tensions could precipitate more major conflicts in Central Asia. In spite of these proclamations about interethnic tensions, World Bank research [Kuehnast et al, WB 2008] suggests that such tensions have emerged more as outcomes rather than drivers of local conflicts. In addition, the widening gap between the elites and vast numbers of the poor, weak governance and conflicting rule systems, in a context of economic uncertainty, high unemployment (especially among youth), and criminalization of the economy are creating the context for local conflicts.

Another critical point to consider is that there has been no political regime change for the last two decades in Uzbekistan. President Karimov’s exit—whenever it happens—will change the dynamics in the region. His autocratic and oppressive governance has held the border tensions in check. However, new leadership may bring uncertainties with regards to containing hostilities. Concerns about the number of small and large arms flowing in from Afghanistan have both Uzbeks and Tajiks worried about how issues might get resolved. A recent USIP study [Zenn, Kuehnast. 2014] found people are afraid problems will be resolved at the local level at the end of a gun.

Local conflicts must be also considered in the context of clan and business networks that form the basis of local power on which national leaders depend. The prevalence of patron-client relationships, connections, loyalty, manipulation of formal rules and force are the key parameters for governance in these states. At the very core of water management, conflict management depends on these clan and business networks.

The gap between the poorly enforced formal, top-down regulations and the local, customary laws that rely on social influence, cohesion and respect for elders has created a situation in which discordant “legal pluralism” has emerged. Therefore, individuals must constantly contend with the issue of “whose rules rule” in everyday contestations. The clash between various rules is intensified at neighboring borders, where differing policies collide among these not-so-friendly states. In many instances, even the formal border demarcation is contested, leaving a no-man’s land that exacerbates local tensions and conflicts.

Agriculture is the key to the survival for many in the region, and in some areas, competition for land and water is intense. While wasteful practices and poor water management are core issues, one must also consider the demographic challenge of Central Asia: roughly half of the population is under 30 years of age, and most of these young people are worse off than their parents’ generation. As a group, this generation of youth has higher rates of illiteracy, unemployment, poor health and drug use than other age groups. Inattention to the needs of this disenfranchised group significantly increases the risk of local level conflicts in individual countries and throughout the region. In addition, water and border conflicts are intertwined with other issues, and any crisis in the region will not be a stand-alone water conflict, but incorporate elements of violent extremism (including the influence of ISIL, to which the Central Asian jihadist group IMU has pledged its support), drug networks, and the yet unknown impacts of the Afghan transition, political nationalism and Russian trade union pressures [Zenn, Kuehnast, 2014].

The U.S. Institute of Peace considers conflict a normal condition of human societies, however much can be done to prevent violent conflict from being the default mechanism for solving the problem at hand. Central Asia deserves American support for conflict prevention.   Thank you.  I am happy to answer your questions.

The views expressed in this testimony are those of the author and not the U.S. Institute of Peace, which does not take policy positions. 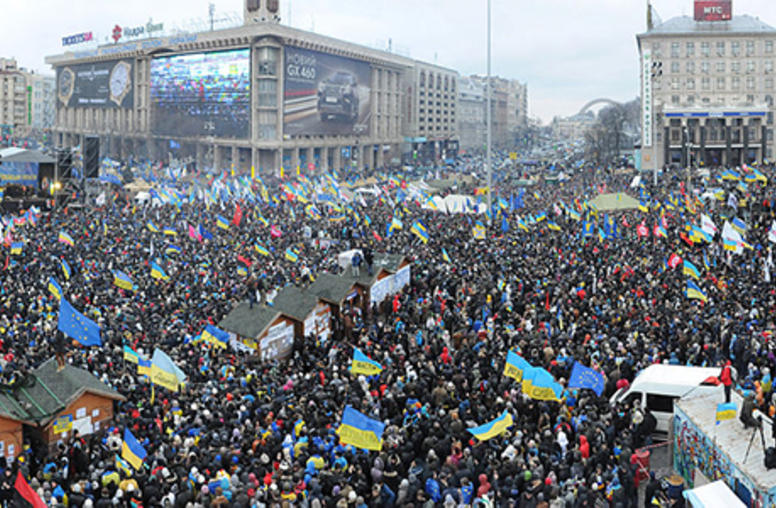 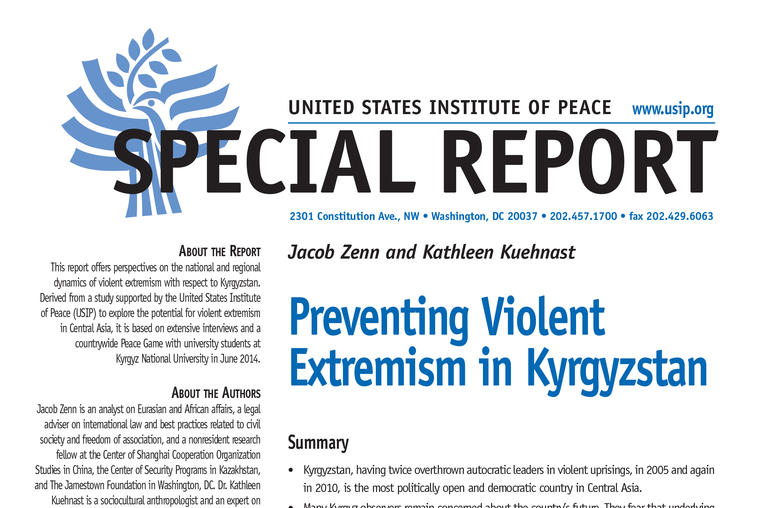 Kyrgyzstan is the only country in Central Asia that has seen significant political transition since the breakup of the Soviet Union in 1991, having twice—in 2005 and 2010—overthrown autocrats in violent uprisings. At the same time, its new democratic institutions, elected leaders, and multiparty parliament make it a test case for political liberalization. If its political system fails or the country falls apart, so will the first democratic experiment in Central Asia. Concerns within Kyrgyzst...