A poignant plea from a prominent Iraqi lawyer who was lauded this week for her community leadership illustrated the determination it takes to achieve change in the most daunting circumstances. “Please, don’t forget Iraq,” Suaad Allami told an audience at the U.S. Institute of Peace, just hours before President Barack Obama announced plans to send 300 military advisers to support her country’s security forces amid the current crisis.

Allami is one of five recipients of the Global Leadership Awards from Vital Voices Global Partnership, a U.S. nonprofit organization that identifies, trains and helps strengthen emerging women leaders and social entrepreneurs around the globe. The awards ceremony at the John F. Kennedy Center for the Performing Arts recognized the women for their work to strengthen democracy, increase economic opportunity and protect human rights. The other recipients hailed from Syria, Guatemala, Tanzania and India.

Four of the women spoke at USIP on June 19, in partnership with Vital Voices and the Bernstein Family Foundation. The civic leaders answered questions about the innovative approaches they developed to improve conditions and strengthen the influence of women in their societies. Allami, for example, established Iraq’s first legal clinic for women in the impoverished northeast Baghdad neighborhood of Sadr City, home to nearly 2.5 million people.

“They fight for women whose dignity has been stolen by their circumstances,” said Kathleen Kuehnast, the director of USIP’s Center for Gender and Peacebuilding. The center coordinates the Institute’s work in building capacity among women leaders in conflict settings, preventing sexual violence and rape as a weapon of war, and developing teaching and training materials to engage practitioners and policymakers on related issues.

Punctuating the danger these women leaders often face, the Syrian awardee, human rights activist Razan Zaitouneh, was abducted in Syria in December, along with her husband and two other civic activists. There has been no sign of her since.

Syria’s war exploded across the border into already fragile Iraq last week, as the militant group Islamic State of Syria and the Levant (ISIL, also known as ISIS) swept across northwestern Iraq, captured the country’s second-largest city, Mosul, and proceeded to march south toward Baghdad. Iraqi officials have said their security forces, which collapsed in the face of the initial onslaught, have stalled the ISIL advance. But news accounts report possible atrocities and thousands of Iraqis have fled their homes and communities.

Allami left Iraq for the awards ceremony in the U.S. just as the crisis was unfolding in Mosul, far to the north, and she said at USIP that she was anxious to get back. The crisis means her organization, Women for Progress, and others will need to redouble their work, she said.

Asked how she can maintain the stamina and determination to continue her work against the odds, she said, “This is my responsibility as a woman … If we are just watching and we are not doing anything, then I think nothing will change.”

She appealed to Americans to keep supporting Iraqis “to achieve democracy, to have a better life, at least with very simple standards” of peace and security, Allami said.

Vital Voices provides mentoring, training and networking opportunities for the women it supports, said Jennifer Morris Smith, director of strategic partnerships for the organization. “We search the world for incredible women who have a vision for change in their community, in their country and around the world, and we invest in them,” she said.

Starting with a cow, Sero

Awardee Victoria Kisyombe invests in women as well – in her own country of Tanzania. She founded SELFINA, working to increase the incomes of self-employed women through micro-credit and micro-leasing.

Her story started with her cow, Sero. When her husband died unexpectedly in 1991, she was left with her three children and realized that she had no property in her own name, or collateral or credit history. Tanzania’s traditional customary laws mean more than 90 percent of women own no property, according to Vital Voices.

So Kisyombe sold her cow’s milk to make money. But other women around her didn’t have even that. So in 2002, she opened SELFINA, named after the cow – Sero Lease and Finance Limited – and began loaning and leasing productive assets such as chickens and providing training on how to manage the assets effectively. She got a $5,000 donation from women of a Christian evangelical church in the U.S. and eventually attracted the support of local bankers. Her experiment helped persuade the country’s parliament to adopt its first law on leasing.

Now, 12 years later, the group has provided 25,000 leases and $16 million in credit to women, touching the lives of more than 200,000 people and creating an estimated 125,000 jobs. Her clients now included florists, caterers and clothing designers as well as farmers, including many widows and young women who otherwise wouldn’t have access to capital.

“Economic empowerment is very powerful,” Kisyombe said. “Then, the women become decision-makers in their own homes, in the society, and with that you find they become socially empowered and the next thing, some of them start vying for political positions.”

Vital Voices awardee Priti Patkar works to end inter-generational human trafficking, a phenomenon in India in which 90 percent of girls born to sex workers also become prostitutes. She became aware of the red light districts in her native Mumbai when she was researching marginalized groups as a university student in social work.

Having seen the toll of prostitution on the women’s children, Patkar opened a 24-hour child care center, providing education, a safe play space and counseling, as well as medical care and vocational training to the mothers. She now runs four shelters, constantly dodging the machinations of traffickers and criminal syndicates.

The biggest challenge is that communities where sex trafficking is widespread have internalized the exploitation, considering it normal and their destiny. 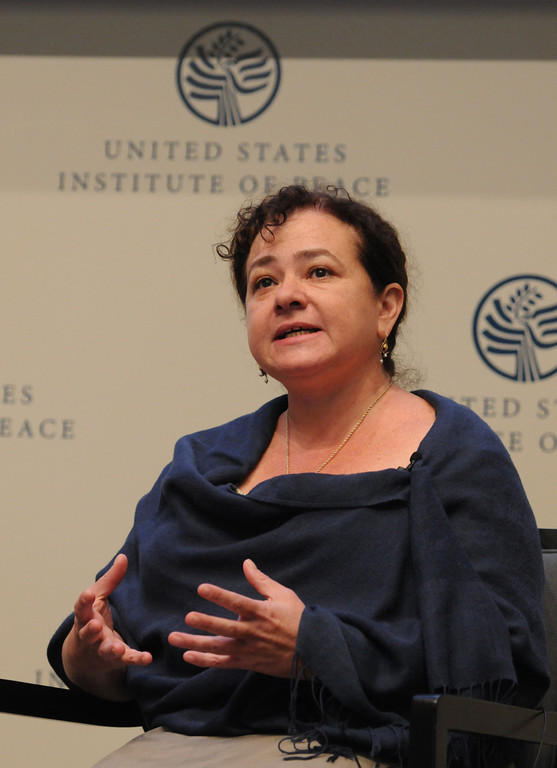 The awardee from Guatemala, Claudia Paz y Paz, became the first female Attorney General in 2010 for a country with one of the world’s highest homicide rates and that ranks third in murders of women, according to Vital Voices. A lawyer and activist, she was a consultant to the United Nations Mission in Guatemala and founded the Institute for Comparative Criminal Studies of Guatemala, a human rights organization.

“I never imagined that I would become an attorney general,” she said at USIP. She was at a forum for candidates and noted aloud that all were men. The men responded that women didn’t want to get involved. She decided she should, though only after agonizing about the ramifications for her family and the responsibility of supervising more than 5,000 staff.

According to Vital Voices, more drug traffickers were arrested in her first six months in office than in the previous 10 years. And 10 times more cases of violence against women and homicide were resolved than in any previous administration. She also pursued high-ranking combatants in the country’s civil war for war crimes.

The Vital Voices awardees “each make a significant difference not only in their communities, but far beyond the boundaries and borders of their countries,” Kuehnast said. “The awardees are creative, courageous, clear-sighted and relentless women leaders who redefine the concept of power in their pursuit of a better world.”

USIP President and CEO Nancy Lindborg explains how U.S.-Iran tensions could exacerbate state fragility and hamper longstanding peacebuilding efforts in Iraq and Afghanistan, saying, “All of this can be put at risk with the current tensions as both countries really fear becoming collateral damage.”

With tensions between Iran and the U.S. already simmering, the January 3 U.S. airstrike that killed powerful Iranian commander Qassem Soleimani is sure to have ripple effects across the region. Maj. Gen. Soleimani, the commander of Iran’s Quds Force, coordinated Iran’s military operations and proxies across the Middle East.

Following the attempted siege of the American Embassy in Iraq, USIP’s Elie Abouaoun says the U.S. must increase its presence in Iraq because it “doesn’t have the choice but to increase its investment … so that the expansion of Iranian influence is basically contained.”

The horrific story of ISIS’s bid to wipe out Iraq’s Yazidi minority is fairly well known in the United States. At least in broad terms, Americans who pay attention to such things understand that the terrorist group’s fanatical gunmen rolled in on a defenseless people, butchered men and boys by the thousands and hauled away young women into sexual slavery in a genocidal plan.