In 2014, Kenya was grappling for ways to respond to increasing terrorist attacks. Al-Shabab gunmen recently had stunned the nation by killing 67 people at Nairobi’s Westgate shopping mall. The government reacted mainly with force, instilling fears that inhibited many communities’ cooperation with authorities. Women saw their sons, brothers or neighbors recruited to al-Shabab and allied groups. In response, groups of activist women working in Nairobi neighborhoods, and in the cities of Mombasa and Garissa—all hotspots of extremist activity—joined to create the Sisters Without Borders network.

The women, from different ethnic and political backgrounds, understand the local causes of extremism, knowledge they use to help their communities prevent radicalization and better collaborate with Kenyan authorities. USIP provided training and support to help the women build their organizations and bridge the gap between communities and government representatives.

In five years, Sisters Without Borders has had an outsized impact on those cities where it began. Garissa, an eastern city, suffered a horrific attack by al-Shabab in 2015 that killed 147 people at the local university and fueled ethnic tensions. The women’s network helped convene community leaders and officials to ease local tensions and build a consensus on ways to improve security. “Women are security officers in the home and within the community,” said Maryam Hussein, a member of Sisters Without Borders’ Garissa chapter. “They too deserve to be heard and included” in building a nation’s security, she said.

In Nairobi, the women have achieved powerful changes in Eastleigh, a commercial district, and Majengo, an adjacent, low-income neighborhood. Al-Shabab for years has recruited youth and launched attacks in those areas—and aggressive police responses fueled public anger against them and the government. Sisters Without Borders has conducted workshops for community members on the drivers of radicalization. And it has used arts programs, support groups for mothers, and even friendly soccer games between young people and police officers to help the community divert young people away from extremist ideas. As a result, women and youth now engage more freely with police, notes Sisters Without Borders’ chair, Fauziya Abdi Ali. Community members better understand the local police and legal systems, reducing the misunderstandings that can fuel grievances and ease extremist recruitment.

In the past year, Sisters Without Borders has expanded into new regions of Kenya that have been hubs of radicalization: Isiolo, Kisumu, Nakuru and others. And the network now participates in shaping national policies.

When the Kenyan government published its first national strategy to counter violent extremism in 2016, that document failed to recognize the breadth of roles that women can play. Sisters Without Borders quickly reached out to senior government officials and women members of parliament to underscore the necessity of including women in any truly viable strategy.

“We offered ourselves as a resource for information—a way for national-level officials to hear important realities from localities,” Ali said. The sisters established their group as a trusted partner in shaping policies on both gender and security issues. Officials in recent months have said publicly that the national strategy will be revised to include the role of women as one of its pillars.

The Global Lesson of Local Women

On March 8, women’s advocacy groups and international organizations will observe International Women’s Day—an annual reminder that our world will never build peace nor advance the human condition without the full engagement of half the world’s population. This year marks the 20th anniversary of U.N. Security Council Resolution 1325, a global affirmation of that principle. Yet women in many societies still struggle for the most basic rights to physical safety, education and opportunity. And the international community still falls short of fully engaging women in building peace and security.

Twenty years after that iconic global declaration, the members of Sisters Without Borders feel they have a voice. Through their dedicated efforts, they have influenced a male-dominated security sector to acknowledge their successes and open a door to women’s participation in policymaking. Members of the network cite as one of their greatest strengths the way that women from diverse parts of Kenya came together to support each other. They build each other up and amplify each other’s successes. They pride themselves on this strong collaboration and, with additional support from USIP, are poised to expand the group regionally across East Africa. Just as the threat of terrorism traverses national borders, so does the strength and potential of women’s networks.

The relationship between corruption and violent conflict is complex and significant. Corruption affects access to basic services, contributes to resource scarcity, and fuels organized crime. It was included on a European Commission checklist for the root causes of conflict, and it was cited as a potential driver of extremism in the 2019 report of the Task Force on Extremism in Fragile States. Focusing on several social movements in Kenya, this report reviews the efforts of collective civic action to combat corruption and advance transparency, accountability, and good governance.

Kenya and Liberia held elections in 2017 that were closely watched by the international community, as both countries’ history of violence led to fears over election security. Although Liberia’s election was largely peaceful, Kenya’s was marred by intense violence. What worked in preventing election violence in Liberia that didn’t work in Kenya?

Drawing on extensive field research in Kenya and Liberia around the 2017 elections in those countries, this report uses local survey data to evaluate the effectiveness of seven prevention measures thought to reduce the risk of election violence. Its recommendations, directed primarily to the international community but offering... 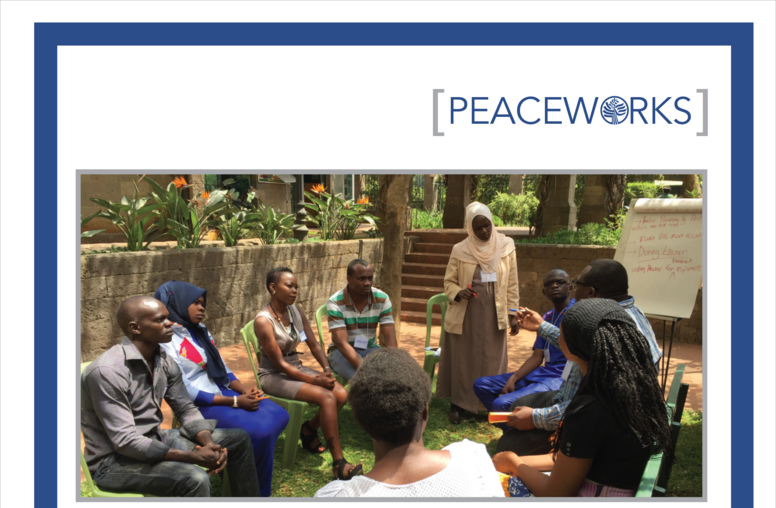 One-third of today’s generation of youth—those ages ten to twenty-four—live in fragile or conflicted countries and are susceptible to the sway of ideological narratives of violent extremism. Evidence suggests, however, that they also play active and valuable roles as agents of positive and constructive change.