For an entire generation of Afghans, peace remains an idea—something they overwhelmingly desire, yet few have actually experienced. With reports that a U.S.-Taliban deal is expected by the end of February, there is newfound hope that the violence may come to an end. Experts say the political roadmap laid out by the U.S. negotiating team, while fraught with challenges, offers a “massive opportunity” for ending America’s longest war and nearly four decades of continuous conflict in Afghanistan.

But while potential intra-Afghan negotiations will aim to hammer out the parameters of a unified Afghan state, the task of healing Afghan society remains. Living in a conflict zone has warped many Afghans’ daily routines and fomented fear and distrust within communities. For the national peace process to succeed, Afghans will need to create a vision of peace that replaces the role that violence currently plays in their daily lives. 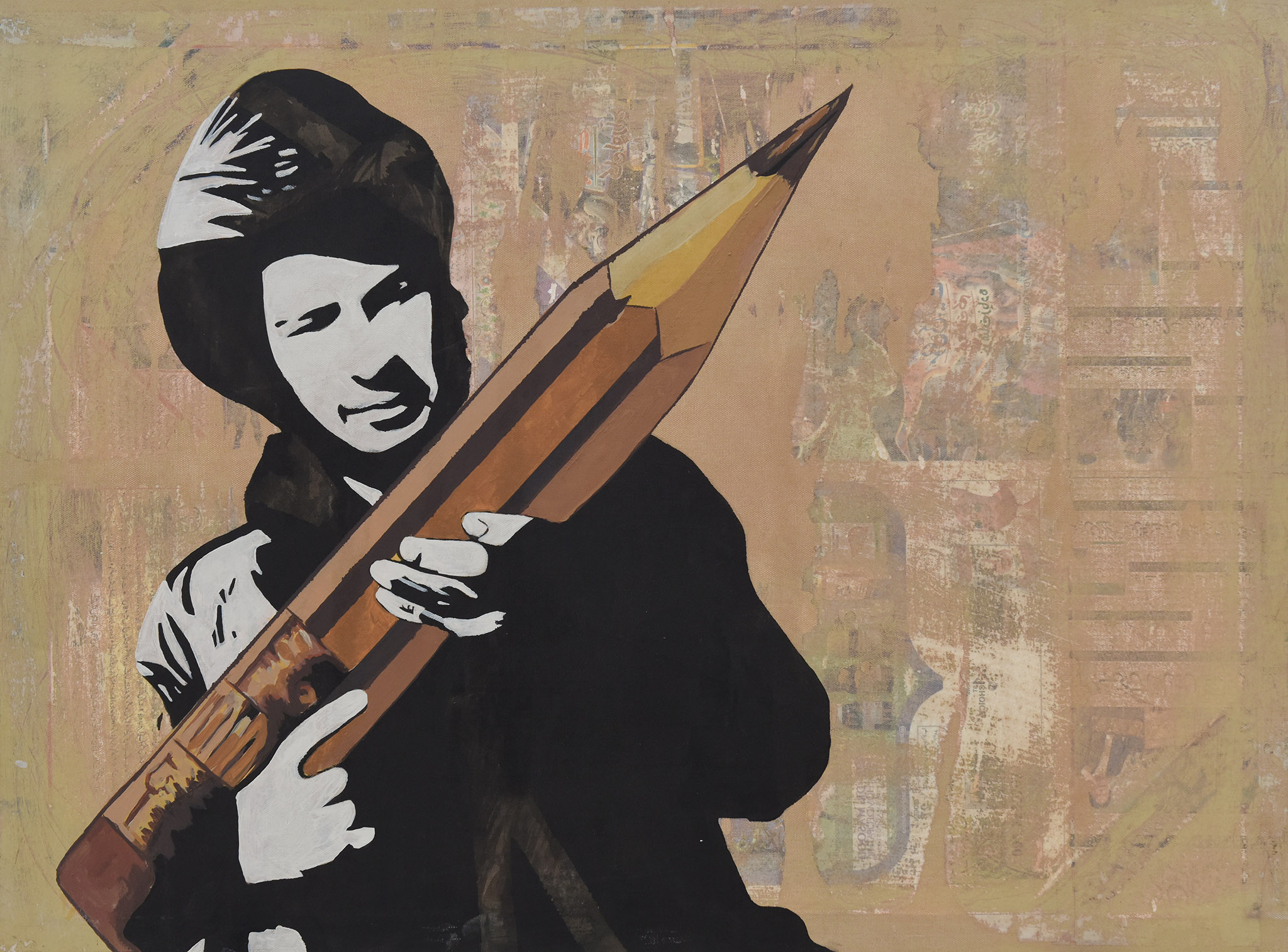 It’s a daunting task, but one that ArtLords has made part of their core mission. The group, founded in 2014 by Omaid Sharifi and Kabir Mokamel, has deemed themselves “artivists”—part artists, part activists advocating for social change. They see artistic expression as a noninvasive way of changing behaviors and attitudes—and discovering what peace looks like.

The organization’s name reimagines the negative stereotype associated with “lords” in Afghanistan, as Kabir and Omaid noted that warlords and drug lords have historically found haven in the country. “We wanted to be the positive lords, the lords that bring empathy, love, and kindness,” said Omaid at a recent USIP event featuring a gallery of the group’s work and a live mural painting where attendees painted collectively. “We wanted to become the voice of the millions that don’t have a voice and a means to speak out.”

Their work encompasses a range of styles, but a major motif involves repurposing symbols associated with conflict. “Our heroes have always been someone with an AK-47, or with a sword, and all of them are men,” said Omaid. “We wanted to have heroes that are women, municipality workers, doctors. Changing the narrative, giving people the opportunity to imagine something different.”

ArtLords has grown quickly in size and notoriety, with features in Reuters and on BBC. Today, they have an internationally recognized platform, and their commitment has made them steadfast partners in the country’s peace process—something that USIP has come to know firsthand.

USIP and ArtLords have worked together on numerous projects over the years, including an anti-corruption campaign that featured murals in five Afghan provinces and a mural project that dealt with men, peace and security. USIP Senior Program Officer Belquis Ahmadi says the collaboration has been successful in large part due to the group’s “passion to raise awareness about citizens’ responsibility in curbing corruption and their innovative approach,” adding “[ArtLords] made it easy for us to select them as our implementing partner.”

Looking back on their early days, the group admits it’s hard to believe how far they’ve come. “We did not envision ArtLords to be this big,” said Omaid. “As people who had other jobs, responsibilities, families, we wanted just to contribute to some level of solving a problem in our city.”

But their success comes as no surprise to Roya Rahmani, Afghanistan’s first female ambassador to the United States: “Artists, with their abilities to imagine worlds beyond our own and to find beauty even in times of darkness, are natural leaders on our journey towards peace.” 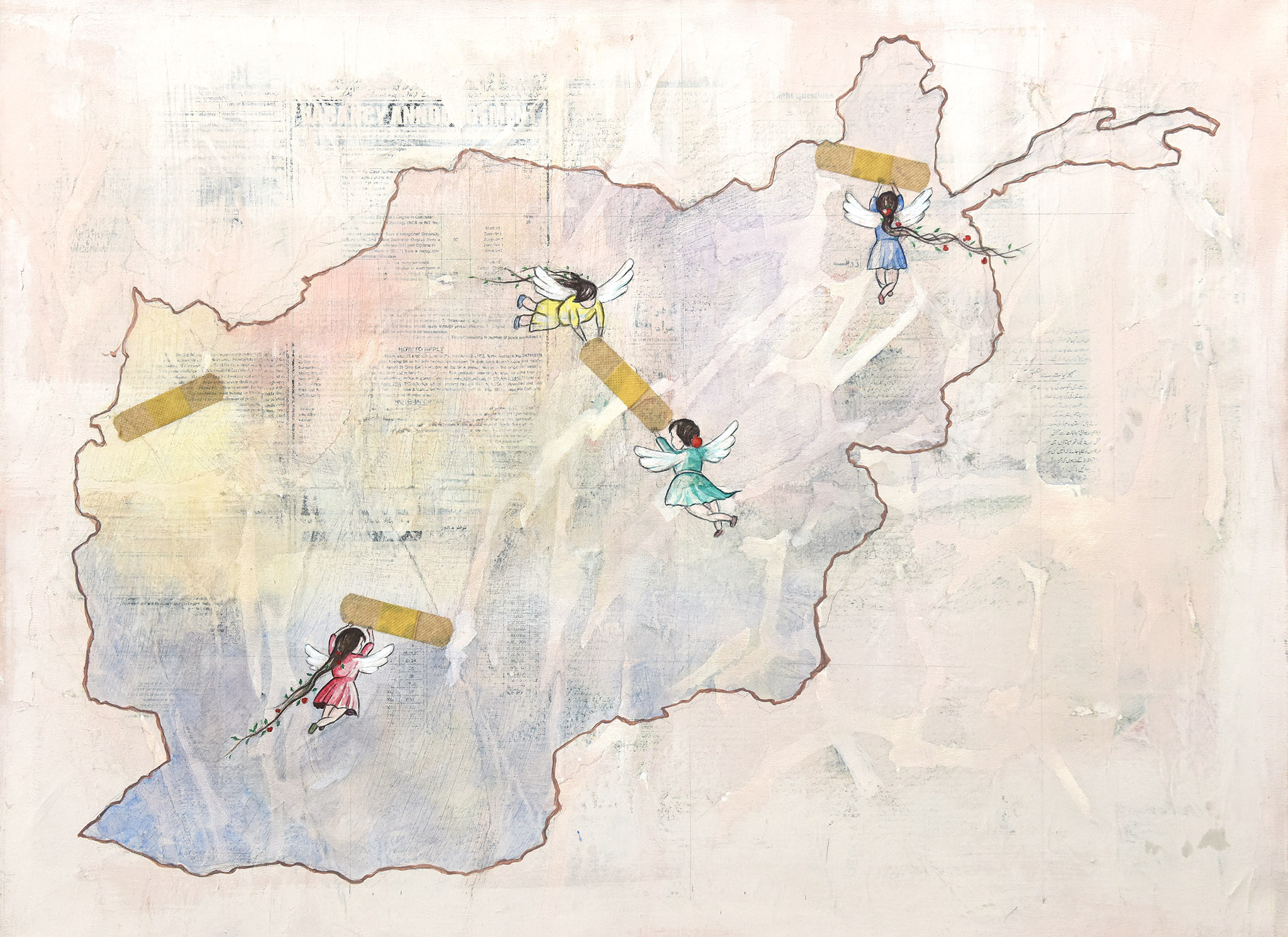 ArtLords currently operates a wide array of programs—including a new initiative called Let’s Talk Afghanistan, which helps promote empathy and tolerance by connecting communities that have been isolated from one another during the conflict.

But the hallmark of ArtLords’ work is the group’s murals. In the last five years, the group has painted over 1,700 murals in 21 provinces across Afghanistan. Omaid and Kabir say the idea stemmed from their desire to push back against the barb wire and blast walls that line the streets of Kabul.

“Mentally, I felt under siege,” said Kabir of the blast walls that have sprung up across the nation’s capital. Omaid noticed a similar effect on his own mental health, saying, “These walls are becoming my interior wall.”

As these physical symbols continued to encroach on public spaces in Kabul, ArtLords decided to paint murals over them. “I imagined if I could put a message or an image on it, the wall will disappear,” said Kabir.

The murals often depict memorials to victims of Afghanistan’s longstanding conflict, as well as messages promoting peace and anti-corruption. But what makes ArtLords’ murals unique is not just that they replace a negative symbol with a positive one—it’s that they serve as a platform for reconnecting communities. ArtLords relies heavily on volunteers, and Omaid says this allows Afghans to rediscover what it feels like to contribute to positive change: “They get a brush and start painting. They ask questions … They want to have a voice in whatever narrative that we are trying to say.” 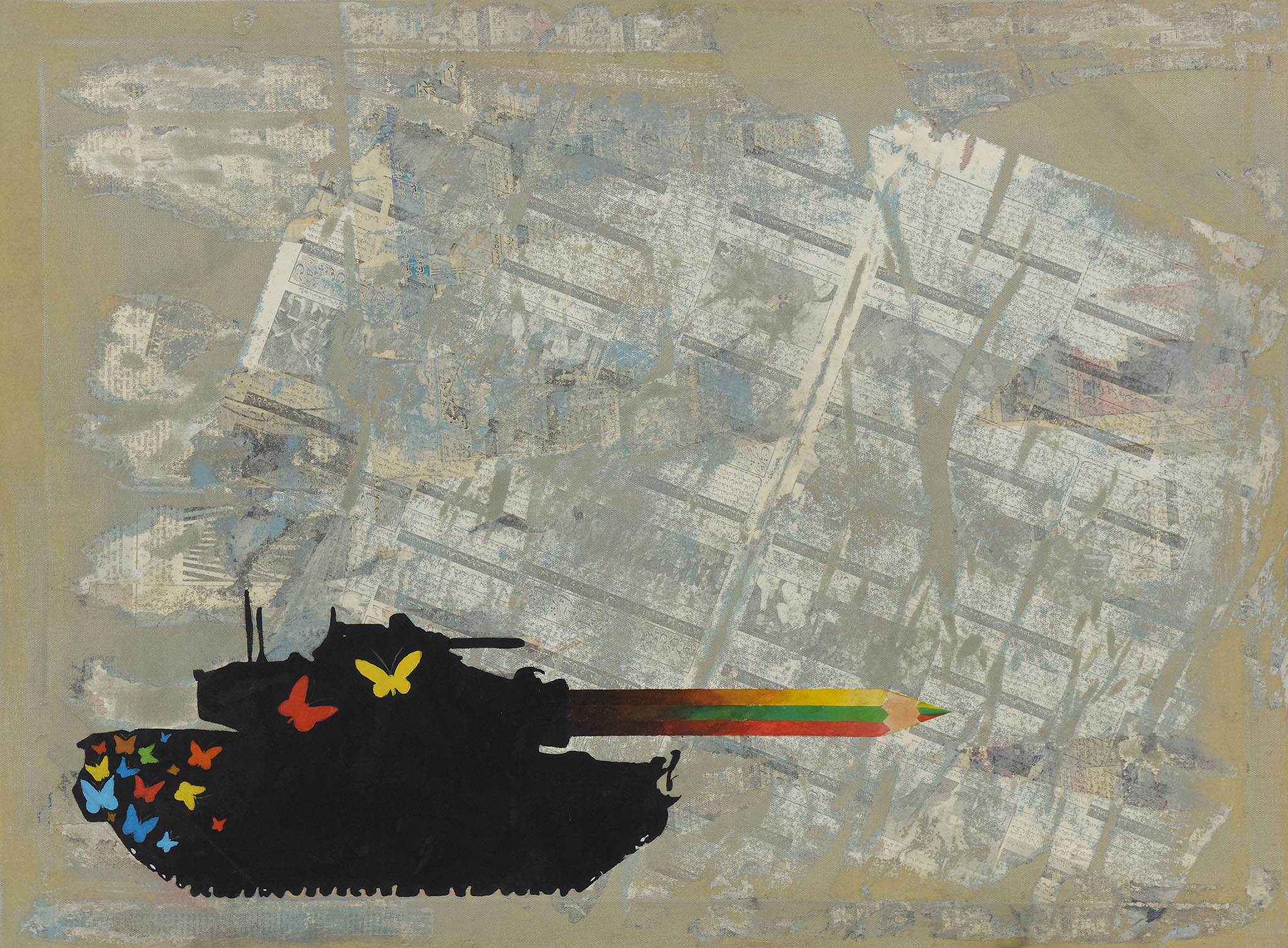 Omaid and Kabir openly acknowledge that fulfilling ArtLords’ mission is not without risks. Despite their positive message, and Afghans’ overwhelming desire for peace, there are still those who benefit from the violent status quo.

But ArtLords remains unfazed. “These gunmen, they don’t scare us,” said Omaid. “Kabir and I grew up in the same country they grew up in. The only difference is that they have a gun and we got a brush and pen.”

Looming on the horizon are many critical and challenging questions that will need to be addressed in a sustainable peace process, including power sharing, the reintegration of the Taliban, and how long-held animosities can give way to healing. ArtLords sees a role for themselves in the reconciliation process—but made clear that they would not accept a return to the 1990s, when the Taliban drove Afghanistan’s artistic community largely underground. “[The Taliban] have to accept me as a reality of Afghanistan,” said Omaid.

Kabir also addressed the issue, saying, “Whatever the Doha talks are about, a lot of young Afghans won’t accept a recipe that is cooked outside of Afghanistan for Afghan problems.” 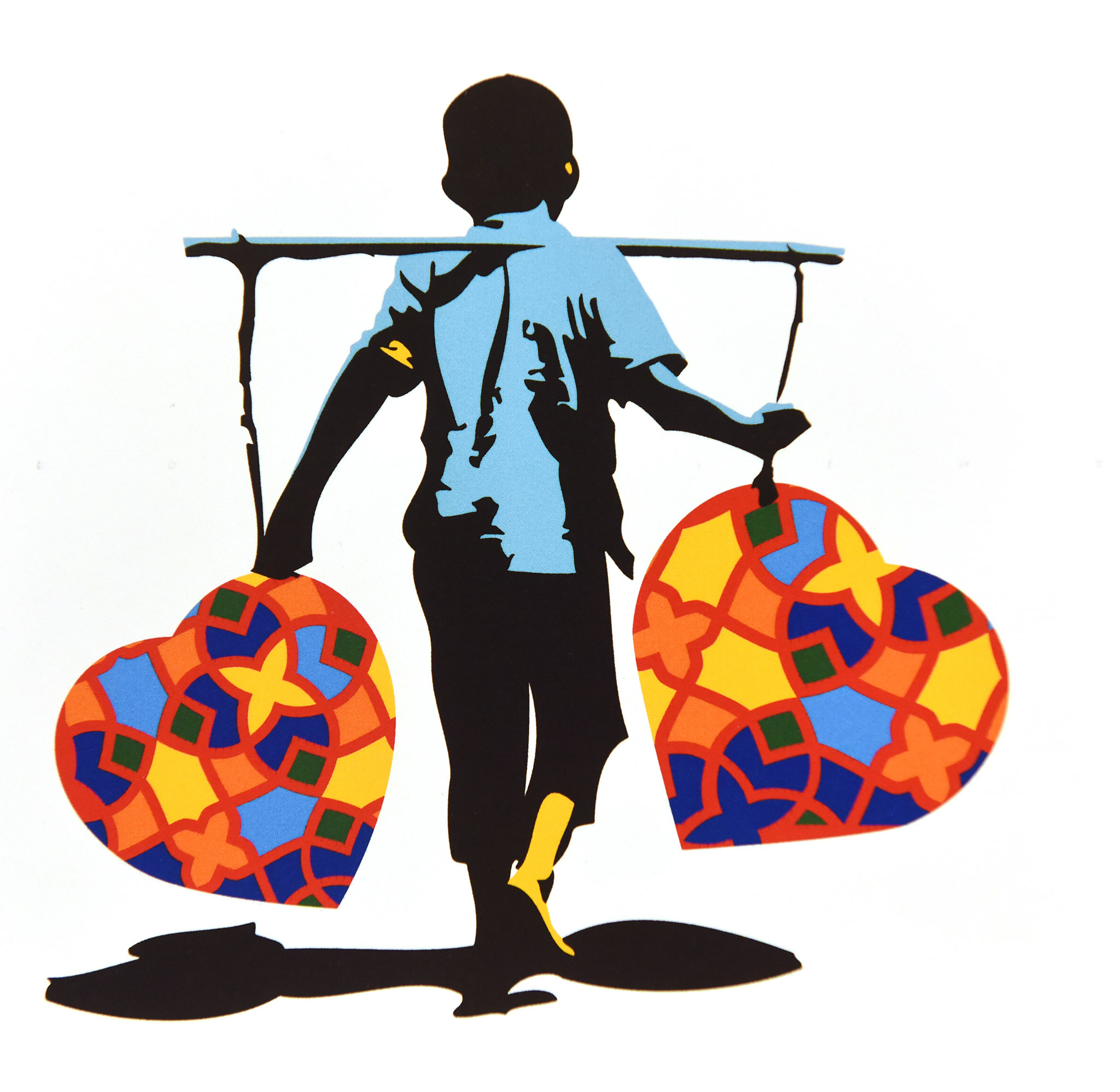 Both Omaid and Kabir admit that the gravity of their mission does weigh on them from time to time. “Do I look sane to you?” joked Omaid. “You feel overwhelmed, you feel responsible to do something,” but at the same time “that encourages us, that inspires us.”

With Afghanistan possibly taking a new step on the path to peace, ArtLords draws inspiration from the change they’ve already seen. “There’s some beautiful stuff happening every day. Personally, it keeps me going,” said Kabir. “I believe in the young spirit of Afghans … everyone blames me that I’m crazy to have such high hopes for Afghanistan, but I really do, and I see it every day.”

And while ArtLords sees hope in Afghanistan, Ambassador Rahmani believes Afghans see hope in ArtLords: “If young artists can imagine turning blast walls into healing works of art, I know we can have peace in Afghanistan.”

Why We Fight: A Conversation with Christopher Blattman

Pakistan and the Afghan Taliban are teetering on the brink of a major crisis. Since coming into power, the Taliban has defied Pakistan — its main state benefactor during the insurgency against the United States military and the deposed Afghan government. It has done so by challenging the status of the Afghan-Pakistan border and providing a haven to the anti-Pakistan insurgent group the Tehreek-e-Taliban Pakistan (TTP), also known as the Pakistani Taliban, which has killed thousands of Pakistanis and seeks to establish a Taliban-style, Shariah-compliant state in Pakistan. This has stunned Islamabad, which was operating on the assumption that the Taliban would be beholden to Pakistan out of gratitude for years of support.

Russia’s war of aggression against Ukraine has caused massive loss of life and destruction of property, forcing millions to seek refuge in neighboring countries. There is mounting evidence that the Russian military has committed war crimes and crimes against humanity, intentionally attacking Ukrainian civilians. The urgent attention that Western countries have given to Russian war crimes and other atrocities in Ukraine has the potential to provide some accountability for gross violations of human rights as well as to shore up a faltering framework of international human rights law.