When Myanmar’s National League for Democracy leads a new government into office in coming months, it will inherit a peace process in which the outgoing government last month signed a cease-fire with eight of the 17 ethnic armed groups that have been part of the country’s 60-plus years of civil warfare. The October cease-fire was a limited advance in peacemaking that may bring greater stability to the Thai border area. But as mediators work to consolidate and broaden that cease-fire accord, they face uncertainties from the political transition—and more fundamentally, from the apparent determination of the national armed forces to fight minority ethnic groups for control of the rich economic resources in the northern state of Kachin.

On October 15, the Myanmar government signed a “Nationwide Cease-Fire Agreement” with eight of the armed groups with which they had been negotiating collectively for some 23 months. Government negotiators hoped to keep the negotiations moving forward during the long post-election transition, so that they could form the starting point in the peace process for the next government.

Facilitators in the peace talks are determined to keep all parties—both signatories and non-signatories—in continuing dialogue as implementation of the cease-fire proceeds, said Ja Nan Lahtaw, a Kachin peace activist who is co-facilitator of the talks. She discussed the signing ceremony and plans for continuation of the peace process in a recent visit to the U.S. Institute of Peace.

"The elections have created a new political reality in Myanmar, not only for the government, but for the peace process itself." ​

Lahtaw pointed out that the progress to date in the peace talks had been historic for the country in two major respects. First, it was the only time the government had approached in earnest a political settlement with ethnic minorities. And second, it was the first time that all the ethnic armed organizations had formed a united front to develop a common position vis a vis the government. It was essential, therefore, to continue building on these achievements and, in particular, not to squander the unity of the ethnic armed organizations.

Several developments since October 15, however, have put that government strategy in question.

The first was a meeting on November 1-3 by the non-signatory groups, hosted by leaders of the Wa ethnic minority in their capital, Panghsang. The Wa, who previously had refused to join the collective ceasefire, proposed to create an alternative track for the peace process by forming a new coalition to prepare for meaningful political dialogue with the next government after the elections. In other words, the Wa wanted to take the process directly into political dialogue, circumventing the elusive national cease-fire.

The second issue is the military’s continuing reluctance to commit to a cease-fire with some of the largest ethnic armed groups, most especially the Kachin. Of the non-signatories, the Kachin are key to a sustainable peace agreement. Because Kachin State holds a large concentration of the country’s most valuable natural resources, particularly minerals, forests and hydropower, many observers believe the continuing conflict in this area is largely motivated by a struggle to control these resources.

The Kachin want an equitable arrangement with the government, giving them fair access to their own resources. While the cease-fire accord’s general terms for resource sharing promise eventually to deliver this result, the Tatmadaw appears to be deliberately creating barriers for the Kachin Independence Army to join the agreement. These include the military’s continued pressure and military attacks on Kachin forces to gain control of more territory in Kachin State and its refusal to negotiate with armed Kokang and Palaung groups in the adjacent Shan State, where there is a large Kachin population. Until these groups can be included in the cease-fire accord, it will be impossible to develop effective cease-fire arrangements for Kachin communities in this area.

In a July BBC interview, the Tatmadaw’s commander-in-chief, Min Aung Hlaing, said the military would be willing to reduce its role in the parliament and executive branch when peace had been achieved with the ethnic minorities. However, the Tatmadaw’s continuing assaults on the Kachin and its refusal to include the Kokang and Palaung in the Nationwide Cease-Fire Accord suggest that it is not ready to cede any of its political power or to engage in serious negotiation for sharing economic resources.

A recent study by Global Witness may provide important clues for understanding the conundrum behind the faltering peace process. Citing government, business, and other sources directly involved, it details the dimensions of the jade industry in Kachin State and the degree to which it underpins the large conglomerates of the country’s military and crony class, which continue to dominate its political and economic structures. Until these groups are prepared to share this and other sources of their wealth equitably with the national and state governments, the road to peace and internal stability will be difficult.

It becomes more and more unlikely therefore that the peace process will progress much beyond its current stage before an NLD government takes office.

Priscilla Clapp is a senior advisor to the U.S. Institute of Peace. She served as chief of mission at the U.S. Embassy in Myanmar in 1999-2002. 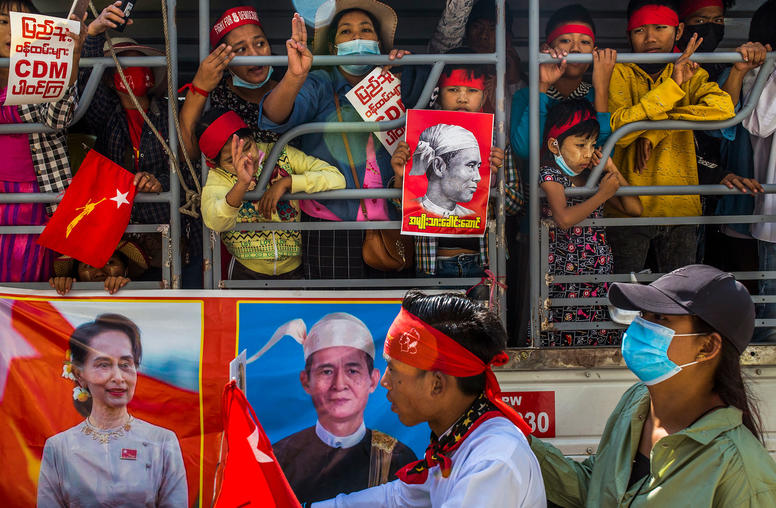 Over the past two months, China has sought to resuscitate its relations with Myanmar’s National League for Democracy (NLD), the deposed party of Aung San Suu Kyi. Many analysts speculate the move reflects eroding confidence on Beijing’s part in the military junta’s staying power. But does it?

Following the coup by the Myanmar army on February 1, 2021, fighting exploded immediately in the China-Myanmar border area along a strategic trade route between the two countries. But the outbreak wasn’t about the coup — instead it was a battle between two Chinese-speaking militias over control of the Kokang Special Administrative Zone, a lucrative center for illegal business. The story behind this episode provides a small window on the rise of regional criminal networks under the army’s patronage and how they are enjoying a new lease on life under the junta.

Since Myanmar’s military illegally deposed the country’s elected government on February 1, it has killed more than 1,000 people and is actively undermining efforts to manage the COVID pandemic by arresting volunteer doctors, blocking imports of medical supplies and hoarding and stealing oxygen. The military’s inhumanity and daily atrocities have created a common enemy for a divided society and a rare opportunity for the Myanmar people to initiate a much-needed nation-building process. The opposition is a loose group of organizations largely held together by a shared hatred for the military. If it is to decisively shift the trajectory of this conflict and end the military’s 70-year stranglehold on power, it will need to unify through a transformative reconciliation process.

Over the past six months under the junta’s “care,” the chaos and turmoil sparked by the coup has moved the country past the brink of failed state status. Growing armed resistance is emerging in the shrinking area where the military’s unbridled brutality has preserved its veneer of control. In liberated zones and particularly in regions controlled by ethnic armed organizations (EAOs), new forms of governance and even sovereignty are taking shape in the vacuum left by Commander-in-Chief Min Aung Hlaing’s war on political reform.