The warfare in northern Ethiopia, and associated blockade of food and other needs by security forces, has killed hundreds of thousands of people, according to a monitoring project at Belgium’s Ghent University. Many of them have died through displacement, starvation and disease. Aid workers, who have been targeted and killed in the war, struggle to distribute even minimal food and medications to prevent wider deaths among about 9 million people in Tigray and the adjoining Ethiopian regions of Amhara and Afar, according to the U.N. World Food Program. The war has created what the World Health Organization’s director calls the globe’s worst health crisis. USIP’s Susan Stigant underscores the need for urgent, calibrated action to consolidate and build on this cease-fire.

What possibilities does this truce raise?

The sobering reality is that this is an opportunity, but a delicate one. The truce provides hope for halting a war that has created a humanitarian disaster. Millions of civilians — including women and children —have been forced from their homes, targets of horrendous violence, and left without basic services. Last week, the Ethiopian federal government declared what it called a humanitarian cease-fire, and the Tigray Defense Forces responded in kind. For the estimated 5 million people at risk, the potential impact of the truce is not theoretical. And for the first time in almost a year, there is a possibility to end the war.

While the truce declarations are pivotal, there is still no written agreement. What’s needed now is a sequence of steps to reach a well-defined agreement — one that makes a difference in people’s lives.

Getting an agreement will require building confidence among the warring parties through concrete and sustained steps. Opening humanitarian access to Tigray and Afar, and letting displaced people return, will be vital. These steps will require follow-up and monitoring by political and military leaders. Communication to, and compliance by, security forces on the ground will be needed. Unfortunately, humanitarian responses don’t just start as though we’re flipping a switch even if the security situation improves. Humanitarian partners and resources will need to be mobilized for a coordinated, concentrated effort.

As participants try to build from a cease-fire to a peace process, what are the main pitfalls?

One danger is that an inadequate disentangling of the conflict through these negotiated, concrete steps slips up somehow. The risk is that some misunderstanding between combatants, a small argument at a checkpoint somewhere, erupts in violence and risks setting off other fighting. Minimizing that risk requires that all sides agree on exactly what activities are permitted — and what specific steps need to be taken where, when and by whom. Establishing a robust third-party monitoring mechanism that can verify steps can help to create confidence and de-escalate conflicts as they arise. This requires resources — financial and human — as well as cooperation by political leaders and communities. Inclusion of women and those with the skills to speak with and gain the trust of communities would make a monitoring mechanism more effective.

Moving to a more durable cease-fire, with full buy-in from all sides, poses another complication. This step will need to include the range of security forces — formal and informal — within Ethiopia. It also will need the cooperation of Eritrea, the independent state just north of Tigray, which once was a part of Ethiopia and which has been supporting the Ethiopian government against their old Tigrayan rivals.

Another hazard is Ethiopia’s dire economic crisis. This war has braked what was one of Africa’s fastest growing economies. This country of 117 million, Africa’s second most populous, suffered 35 percent inflation last year and is struggling to meet basic needs. Even some middle-class families now can’t afford three meals a day. People can’t eat a truce declaration, so a significant, timely injection of funds will be necessary. Ethiopia’s economy can again be an engine of growth, but it will need a massive recovery package financed by donor countries, international institutions and private investments. This will require notably engaging China, which has shown its readiness to invest in Ethiopia and the region, and a renewed commitment to transparency and fiscal health.

And so given that, what are the most important next steps, including by the United States?

As always, the most important steps belong to the people directly involved. The United States, with the African Union and other regional partners, can provide support and momentum toward two concurrent steps. One is to deliver humanitarian assistance, in part as a confidence-building measure. This can make the truce real for both for the leaders on each side and for the people who are suffering most from the violence.

Also, the United States and its partners can support Ethiopian leaders to convene face-to-face discussions to achieve a more durable ceasefire. This means quickly identifying a location and any facilitator for talks and agreeing on who participates and in what format. Ultimately, talks will need to include other forces in and around the Tigray, Afar and Amhara regions, and they will need to address a web of territorial conflicts among those regions.

The territorial disputes are complex and have deep historical roots. They involve people’s homes, livelihoods and identities. Talks will need to reach at least interim arrangements on those territorial conflicts — how the areas are governed, who provides security and how day-to-day disputes should be resolved. With those short-term arrangements, Ethiopians can take further steps toward the announced national dialogue — a conversation on how, fundamentally, they can shape their state to avoid these recurring wars and deliver on the promise of the political transition initiated in 2018.

The work of the United States and other international partners — including the African Union, China and United Arab Emirates — does not stop when the parties to the conflict get into the room or sign an agreement. Partners will need to become guarantors and financial supporters of implementing the agreement, with its security provisions — and of stabilizing the economy. Ethiopians have a role to play in this: Partners will be more likely to provide funds if Ethiopia continues reforms and rigorously manages its public finances. Ultimately, the World Bank, International Monetary Fund, bilateral partners and the private sector need to see that investing in Ethiopia’s peace will be productive. 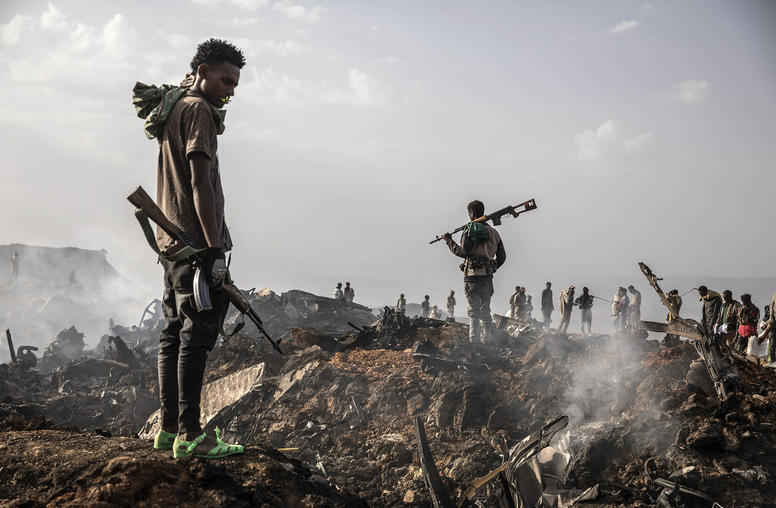