Ethiopia is approaching parliamentary elections on June 5. This will be the first vote since the process of reform launched in 2018 by Prime Minister Abiy Ahmed, and the stakes are extremely high. Elections to the next national parliament, the House of People's Representatives, may determine future decisions about the structure of the country and consolidate the ruling party’s power. While the short-term outlook for the vote is unlikely to change, the election may offer opportunities to support political dialogue which could sustain important reforms and decrease polarization. Still, amid ongoing violence across Ethiopia, including in Tigray, voting in some areas will either not take place or will only be possible to hold under troubling security conditions, which may limit participation.

Researchers Lidet Tadesse Shiferaw and Terrence Lyons and USIP’s Aly Verjee discuss what is at stake in these elections, how ongoing violence could impact the electoral process and how the United States can help advance political reform in Ethiopia.

What is at stake in the June 2021 elections in Ethiopia?

Lidet: The election may shape both short-term political reforms and Ethiopia's long-term trajectory. Ultimately, the election may shift the balance of power between ethno-nationalists and nationalists. Ethno-nationalists emphasize the primacy of ethnic identity as a political organizing principle. They advocate for the implementation of the self-determination of nations, nationalities and peoples in Ethiopia through self-governing, ethnically constituted regions. This is the system established by Ethiopia’s current constitution. Nationalists instead contend that citizenship, rather than ethnic or group identity, be the primary political organizing principle. They propose that ethno-linguistic demographic distribution alone is insufficient to determine how the federation is structured. Today’s political parties span the spectrum of these two political visions. The parties that secure significant shares in the next parliament and which go on to form the government will thus seek to advance their preferred vision of how Ethiopia’s state is organized.

Lyons: The elections are central to Abiy’s claims of legitimacy. The current parliament is composed of members elected in 2015 when the previous ruling party and its affiliates won 100 percent of the seats. Abiy came to office with promises of democratization and prosperity that earned him extraordinary goodwill but today Ethiopia faces its greatest crisis in decades: a brutal civil war and massive humanitarian emergency that involves neighboring Eritrea, allegations of ethnic cleansing and ghastly reports of rape in the northern Tigray region. At the same time, political violence has erupted across Ethiopia, notably in the highly populous Oromo and Amhara regions. The election will not be held in Tigray and will be held under troubling security conditions and federal military supervision in several other areas. Prospects for political reform that seemed so promising in 2018 are in question.

Verjee: In addition to the parliamentary election, residents of five zones (the zone is the administrative structure below a regional state) and one district in southern Ethiopia are due to vote in a referendum to create a new regional state. The South West Regional State is almost certain to be approved and augur another change to internal boundaries which continues the slow unravelling of Ethiopia’s most ethnically diverse region, following the similar Sidama referendum in 2019.

How do these elections compare to prior elections?

Lyons: From 1995 to 2015, polls were held every five years but, with the exception of very contentious elections in 2005 that ended in a crackdown and the arrest of leading opposition leaders, have not offered voters a meaningful choice. While elections were generally peaceful and voter turnout high, they were largely non-competitive. Government harassment led major opposition parties to boycott most votes. Instead of offering citizens a meaningful opportunity to choose their leaders, elections in Ethiopia have served to consolidate the ruling party’s power. The 2021 process differs from the past in several ways, notably with regard to the independent National Election Board (NEBE) and the involvement of several new opposition parties, but it seems likely that the upcoming vote will resemble the past with regards to the limits on participation.

Lidet: Compared to previous elections, today’s political field is formally wider now that exiled opposition parties have returned following the reforms of 2018. However, several opposition figures complain of political harassment, some prominent and controversial opposition leaders are in prison, and at least two political parties have decided to pull out of the race. Whether a decision to boycott is appropriate is debated: Critics point out that one of these parties participated in previous elections despite harassment and other process deficiencies. But their absence, as well as that of some other key political figures, diminishes the competitiveness of the election.

Another important change is social media. In previous elections, the use of social media was negligible. Traditional media, especially print, played a tremendous role in the flow of information and voter education in the 2005 electoral process. Independent media was very restricted in Ethiopia following the 2005 election. Today, social media is increasingly accessible and popular in Ethiopia and has become a preferred platform for information dissemination and consequently both political mobilization and exclusion. In a context of inadequate digital literacy and socio-political polarization, social media platforms are fraught with disinformation and misinformation, used to disseminate hate speech, and even incite violence. This challenge is not unique to Ethiopia, but it is the first time Ethiopians must reckon with the impacts of social media in an electoral process.

Does violence in several parts of Ethiopia affect the electoral process?

Verjee: NEBE has recently reported relatively low levels of voter registration, and as registration was about to conclude last week, decided to extend the registration period. Insecurity has likely contributed to the low registration uptake, and so many may be excluded from the election from the start. Organizing an election in areas with security challenges is obviously difficult for election administrators. Similarly, campaigning in such areas will be difficult, especially for smaller and less well-resourced parties. Potential voters will also understandably find it hard to focus on an election if they are worried that violence will recur in their communities. When political violence is widespread outside of the electoral process, the security of the vote may not be a foremost consideration for many ordinary people.

Lidet: Maintaining a secure electoral process throughout the country will test the capacity of the security forces. How security agencies discharge their responsibilities now, on election day, and in the post-election period, will test whether recent reforms have improved the institutional independence of the security and justice sector from the governing party, particularly if electoral disputes emerge.

For voters, risks to personal security are linked to the number of actors with the capacity for violence. In some parts of the country, the state does not have a monopoly over the means of violence. To safeguard both voters and the electoral process as a whole, the engagement of Ethiopian civil society, including its religious and traditional institutions is needed, even as Ethiopian civil society still recovers from years of suppression.

With only weeks left until the vote, sticking points persist. NEBE has not managed to establish polling stations in internally displaced person (IDP) camps hosting more than 2 million people across the country, before IDPs in Tigray are even considered. NEBE has also been forced to suspend voter registration in several areas of conflict, and not conduct any registration activities in the Tigray region. These issues risk undermining the voting rights of millions, if not effectively addressed, and could also affect the pluralism of the election in some constituencies.

Given these challenges, what can the United States do to advance political reform in Ethiopia?

Lyons: It is not surprising that the June elections are the focus of considerable external attention but by itself the vote will not determine the potential for future reforms or provide meaningful legitimacy to the incumbent. Washington should recognize that political actors and dynamics within Ethiopia will determine the outcome of this moment of crisis. There are opportunities, however, for the United States and others interested in advancing peace and reform to support longer term processes and political dialogue to develop a new road map to sustain the political opening, decrease polarization and end political violence.

Lidet: This election takes place at a time when Ethiopia confronts surmountable national and regional security and political challenges. The election is but one element of Ethiopia's political evolution and should not be treated as an end in itself. The United States should therefore take a long-term perspective and support broad-based processes of reconciliation and inclusive and accountable local governance, which could contribute both to the wellbeing of citizens and the future stability of Ethiopia.

Verjee: There is not much time to change the likely course of the election. However, the election is a moment to push for necessary reforms, such as addressing the detention of political party leaders, limitations on the freedom of the press and the ability to freely organize and assemble. With forceful action to change some state boundaries already underway, signalling that all should adhere to Ethiopia’s existing constitutional arrangements on the management of state boundaries — as is happening in southern Ethiopia — is also important.

Lidet Tadesse is ‎a policy officer at the European Centre for Development Policy Management. Terrence Lyons is associate professor at the Carter School for Peace and Conflict Resolution, George Mason University, and author of the 2019 book, The Puzzle of Ethiopian Politics. 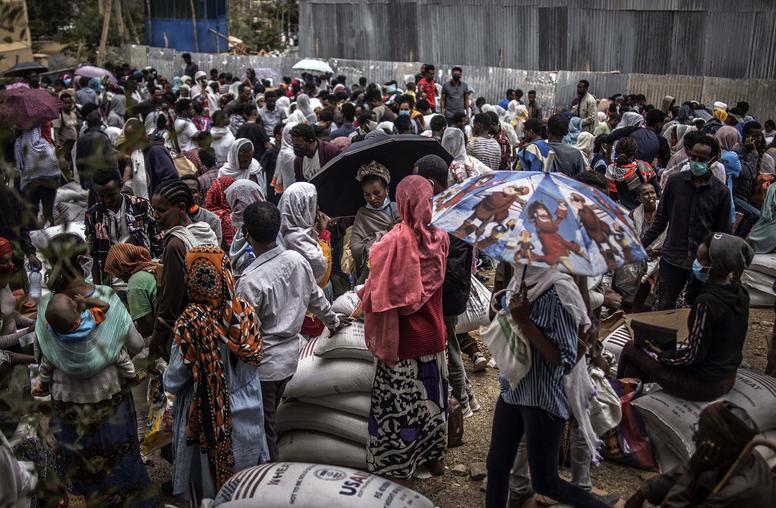