This is the second in the Senior Study Group (SSG) series of USIP reports examining China’s influence on conflicts around the world. A group of fifteen experts met from September to December 2018 to assess China’s interests and influence in bringing about a durable settlement of the North Korean nuclear crisis. This report provides recommendations for the United States to assume a more effective role in shaping the future of North Korea in light of China’s role and interests. Unless otherwise sourced, all observations and conclusions are those of SSG members.

For decades, North Korea’s nuclear program has ranked among the top security challenges for the United States. This threat increased in urgency following a sharp uptick in North Korea’s nuclear and missile tests in 2016 and especially with its first intercontinental ballistic missile test in July 2017. Then, in June 2018 in Singapore, President Donald Trump and North Korean leader Kim Jong Un met for the first time, marking a new chapter in U.S. engagement with North Korea. In a joint statement, the two sides agreed to work toward a new bilateral relationship, the “complete denuclearization of the Korean Peninsula,” and a “lasting and stable peace regime on the Korean Peninsula,” as well as to cooperate on recovering the remains of Americans who had died in the Korean War.

Since the diplomatic opening created by the Singapore summit, the key challenge for the United States and its partners has been to develop a negotiation process capable of sustaining momentum toward those objectives. This has proved difficult, and negotiations are at a stalemate. The two sides were most recently unable to come to an agreement at Trump and Kim’s second meeting, which was held in February 2019 in Hanoi, Vietnam.

Washington and Pyongyang are divided over the definition of denuclearization and how to sequence steps toward achieving denuclearization, creating a new bilateral relationship, and establishing a peace regime. North Korea has called for a “phased and synchronous” approach in which reciprocal concessions are traded between Washington and Pyongyang in a step-by-step manner. In Hanoi, Kim demanded the lifting of five of the eleven U.N. sanctions imposed on the regime, which focus on the civilian economy, in exchange for dismantling the Yongbyon nuclear complex, an offer Trump was unwilling to accept. Since the Hanoi summit, Washington has said that it rejects an “incremental” approach and instead expects both a “big deal” in which North Korea denuclearizes “fully, finally and verifiably” in return for complete sanctions relief as well as progress on the other pillars identified in the Singapore statement.

China shares Washington’s desire for North Korea’s denuclearization but does not believe it is achievable in the short term. Beijing considers a nuclear North Korea to be inherently destabilizing because it provides a rationale for U.S. military deployments and possible intervention in the region, prompts regional actors such as Japan and South Korea to strengthen their defensive capabilities, and raises calls for the development of indigenous nuclear capabilities in these countries—all of which are inimical to China's interests and security. Beijing, therefore, continues to favor a step-by-step, dual-track process for both advancing denuclearization and creating a peace regime on the Korean Peninsula.

China is a vital player in efforts to denuclearize North Korea and must be encouraged to play a constructive role. Because of Beijing’s outsized economic relationship with Pyongyang, its cooperation—or lack of cooperation—in sanctions enforcement largely determines the effectiveness of economic pressures. Moreover, North Korean leadership consults regularly with China and seeks its support in negotiations with Washington, even as it seeks to play Washington and Beijing off one another. China’s ability to shield Pyongyang from economic and political pressure makes Beijing an important factor in efforts to influence North Korea. The United States should work with China to ensure that Beijing wields this influence constructively, recognizing that Washington and Beijing will never be in lock step.

Nevertheless, China will not “resolve” the North Korea crisis for the United States. North Korea seeks security assurances, sanctions relief, and diplomatic recognition from the United States. China can offer its own security assurances and sanctions relief, but it cannot provide what Pyongyang wants in either respect from Washington. Beijing, moreover, has shown that there are limits on the pressure it will exert on Pyongyang. It believes that pushing too hard would only reduce its ability to shape North Korea’s behavior and potentially provoke more risk-acceptant behavior should such pressure prove destabilizing. The United States, therefore, should not place undue reliance on resolving the North Korean nuclear conundrum solely through Chinese pressure.

North Korea depends heavily on China. Under growing isolation from global sanctions, North Korea has become increasingly dependent on China for trade. To diversify its economic and diplomatic relationships, Pyongyang therefore seeks improved relationships with the United States and other countries.

Given the high level of distrust between the United States and North Korea, Pyongyang is unlikely to agree to an all-or-nothing approach that requires its immediate and complete denuclearization in return for full sanctions relief and other diplomatic concessions. The United States should instead pursue negotiations based on a step-by-step, parallel-track process that can build the trust necessary for reciprocal measures toward denuclearization and a peace regime. This approach is the most practical way to achieve progress toward U.S. national security objectives.

The step-by-step approach is in broad terms close to the phased and synchronous approach that both China and North Korea prefer, but adopting their preferred approach does not also require adopting their preferred measures. Within such a process, China and North Korea can be expected to push for reciprocal de-escalation. Washington should identify measures that it can offer Pyongyang in return for steps toward denuclearization without reducing (or with minimal reduction in) U.S. readiness and force posture on the Korean Peninsula.

The United States should work with China as well as regional allies to implement a coordinated approach to this process. China could be especially helpful by clearly signaling to Pyongyang that the price of seeking to be a de facto nuclear power will be continued heavy sanctions and international opprobrium, and that full denuclearization, over time, is the best alternative. Moreover, a road map that Washington and Beijing jointly endorse would send a strong signal to Pyongyang that efforts to exploit differences between them will fail.

Although defining a road map with China will be neither quick nor easy, Beijing supports a dual-track approach and is likely to engage in discussions based on such a premise. China could further contribute—alongside the United States and South Korea—to the long-term negotiating process by offering North Korea security and economic incentives, technical assistance on arms control, and assurance that it is committed to helping sustain peace on the Korean Peninsula.

U.S. policymakers should avoid linking the North Korea issue to other issues in the U.S.-China bilateral relationship, including the trade war and Taiwan. Such linkage would be ineffective, likely create a host of new problems, and make the fundamental challenge of nuclear weapons in North Korea even more intractable.

The United States should continue to urge China to strictly enforce international sanctions imposed against North Korea until Washington and Beijing—as well as the international community—agree fully on a process for sanctions relief.

Washington and Beijing should discuss, in both bilateral and multilateral contexts, how to prevent a nuclear-armed North Korea—even one that is theoretically denuclearizing—from sparking a cascade of nuclear proliferation in the region. Inadequate consideration of Japan’s and South Korea’s security concerns, especially in regard to medium-range missiles, could strengthen the arguments of those in both countries who favor acquiring their own nuclear weapons.

U.S. policymakers should increase efforts to reduce frictions between Japan and South Korea, bearing in mind that some US strategic objectives, such as increasing Japan’s regional security role, contribute to these frictions. Widely divergent priorities among U.S. regional allies regarding negotiations on the Korean Peninsula will complicate—even undermine—U.S. strategy and create openings that China could exploit. Disputes between South Korea and Japan that are unrelated to North Korea could also compromise effective coordination.

If relations between Washington and Pyongyang return to heightened tensions but relations between the two Koreas continue to improve, it could create a rift in the Washington-Seoul alliance that Beijing could exploit. Washington must strive to remain as supportive as possible of Seoul’s approach to building a peace regime on the Peninsula, yet guard against excessive exuberance in the Blue House. Beijing, Pyongyang, and Seoul have a common agenda (inter-Korean dialogue and rapprochement) that might compromise U.S. preferences and leverage in the negotiating process.

Washington should also begin bilateral and multilateral conversations with Pyongyang, Seoul, and Beijing, and later with Tokyo and Moscow, on the contours of a peace regime for the Korean Peninsula. Given the many interests at stake, starting the conversation early to establish baseline understandings and work toward a consensus far in advance of formal negotiations will contribute to the sustainability of the final outcome.

If U.S.–North Korea talks remain stalled indefinitely or completely break down, Washington should work with Beijing to bring Pyongyang back to the negotiating table. In that regard, it is important for China to believe that North Korea, not the United States, is primarily responsible for the impasse.

Home to about 2 billion people, South Asia has become a strategic focal point for China’s growing global influence. USIP’s Jacob Stokes says to properly counterbalance Beijing in the region, the United States should focus “less about responding to China … and more engaging with the states of South Asia.” 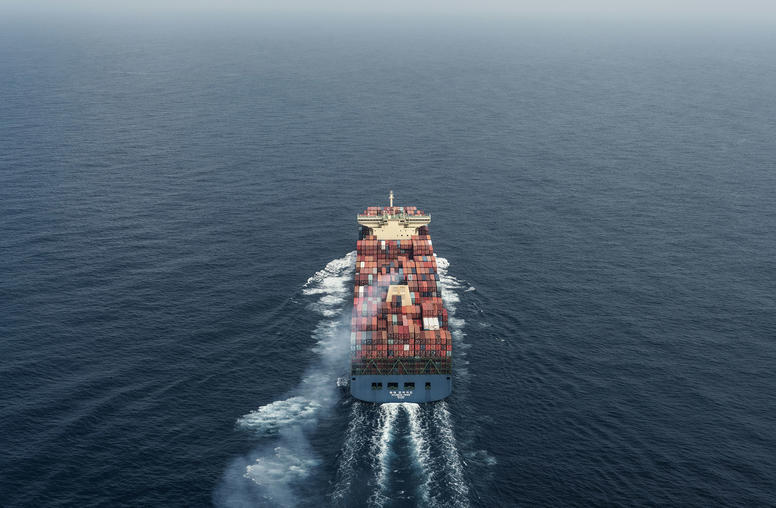 China has embarked on a grand journey west. Officials in Beijing are driven by aspirations of leadership across their home continent of Asia, feelings of being hemmed in on their eastern flank by U.S. alliances, and their perception that opportunities await across Eurasia and the Indian Ocean. Along the way, their first stop is South Asia, which this report defines as comprising eight countries—Afghanistan, Bangladesh, Bhutan, India, Maldives, Nepal, Pakistan, and Sri Lanka—along with the Indian Ocean (particularly the eastern portions but with implications for its entirety). China’s ties to the region are... 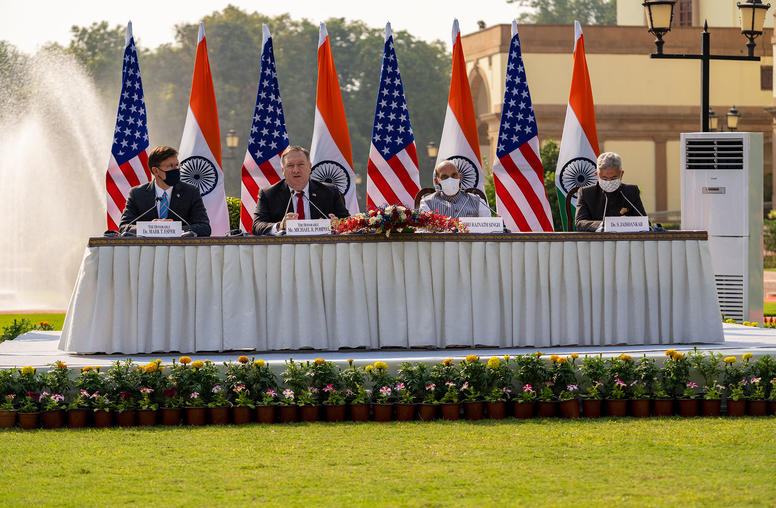 The United States and India inked on October 27 a key agreement that will help New Delhi get real-time access to American geospatial intelligence. The agreement, known as the Basic Exchange and Cooperation Agreement (BECA), was a result of the 2+2 ministerial dialogue between U.S. and Indian defense and foreign affairs chiefs, following a trend in recent years of deepening military cooperation geared toward pushing back on China’s increasingly assertive policies in the region. This comes after a spate of skirmishes this year on the Line of Actual Control (LAC), a Sino-Indian disputed border region. USIP’s Vikram Singh looks at India’s evolving defense posture, deepening U.S.-Indian ties, and how it relates to India’s rocky relationships with China and Pakistan.