As Iraq’s parliamentary elections approach this weekend, destabilizing disputes with the Kurdistan Region remain unresolved. Perhaps the most intractable, and least discussed, is how to address the insolvency of the semi-autonomous Kurdistan Regional Government (KRG). It’s a simmering crisis that threatens Iraq’s economic future and political unity, and one that the central government needs to step up and help defuse.

The KRG is choking on debt. It won’t be able to repay its creditors in full even if a new, post-election government compromises on intensely disputed oil and budget policies in ways that significantly boost its revenue. While data for the Kurdistan Region remains sketchy, it’s likely that the KRG’s debt is at least $17 billion, an unsustainable level that is probably in excess of 100 percent of the region’s GDP. Richer countries like Japan or Italy may be able to tolerate such debt levels but the much poorer Kurdistan Region cannot.

The KRG has not overspent so much as suffered an avalanche of economic blows since 2013 that include tumbling oil prices; the cost of fighting the Islamic State and sheltering people displaced by related violence; and sharp cuts in revenue transfers from Baghdad. Late last year, the KRG’s fiscal problems were greatly compounded by the central government retaking control of oil wells around Kirkuk that the KRG seized in 2014 to block the Islamic State.

The KRG’s debt crisis, and the concurrent near-collapse of the Region’s economy, have serious implications for Iraq as a whole whether or not non-Kurdish political leaders choose to recognize it. International investors will look askance at Baghdad’s refusal to address an internal, subnational debt debacle that leaves creditors of all stripes unpaid. That will damage the business climate generally at a time the government is scouring for private investment to aid reconstruction from the war against the Islamic State. A bankrupt KRG will also be a drag on the broader Iraqi economy and foster a feeling in the Kurdistan Region’s citizens that they don't belong to the unified Iraq insistently proclaimed in Baghdad.

The central government, which has remained disengaged from the crisis, would be well advised to work with the KRG to find ways to restructure its debt. The elections provide a possible opening to revisit Baghdad’s current policy: Assembling the next government will likely mean a bid for support of Kurdish lawmakers, putting them in a stronger negotiating position.

How and why did the KRG run up so much debt?

Beginning in 2014, the regional government faced a double-whammy. First, sharply-reduced world oil prices slashed the KRG’s own oil revenues. At the same time, Baghdad—hard-pressed itself by lower oil prices—ratcheted up its objections to the KRG both exporting its own oil and receiving a share of southern Iraqi oil revenue. Unable to reach a compromise, Baghdad ended the longstanding practice of transferring a share of the Iraqi budget to the KRG. Although the KRG has a revenue stream from its own oil fields, the cut to the larger budget transfer in 2014 and the October 2017 loss of the Kirkuk fields left the regional government desperately short of funds to meet its obligations.

To keep the KRG and the Region’s economy afloat, the KRG ran up debts with a variety of creditors. Many were incurred in the oil sector when the KRG began to delay reimbursements to locally operating companies and took advances on export sales to trading companies including Rosneft of Russia. The KRG also reportedly owes money to the private power company that provides the Region’s electricity, to the Central Bank of Iraq’s quasi-autonomous branches in Erbil and Sulaimaniyah, and to other commercial creditors. It also owes billions of dollars in back pay to civil servants, who constitute 50 percent of the region’s labor force.

A look at what little data is available reveals a stark picture. The KRG owes creditors at least $17 billion. While precise data on the KRG’s debts, revenue and regional GDP are not available, anything close to the reported debt level is unsustainable, that is, it’s unlikely the KRG can ever pay these debts in full.

Before the long decline of the Region’s economy in the past three years, the World Bank estimated the Region’s GDP at about 28,320 billion Iraqi Dinars in 2011, roughly $24.3 billion. Given much lower oil prices from 2014 to 2017, loss of control over Kirkuk oil last year, the consequences of the Islamic State and deep cuts in federal revenue-sharing, the Kurdistan Region is suffering from a severe economic downturn, undoubtedly eroding GDP considerably since the 2011-13 period.

Total KRG revenues were about 15,257 billion Iraqi Dinars ($13.1 billion) in 2013, the last year that Baghdad made a full revenue transfer. Thus, total KRG debt would almost certainly exceed total revenue, even assuming a return to the previous transfer methodology. Based on international experience with indebted developing economies, the KRG’s debt at more than 100 percent of government revenues cannot be fully repaid at the Kurdistan Region’s income level.

Non-Kurdish Iraqi leaders tend to see the KRG’s problems—and the economic disputes between Erbil and the central government—as somehow disconnected from the broader Iraqi economy. Yet Baghdad’s hard line on the KRG’s debts to private companies seems detached from the central government’s goal of attracting foreign investors and businesses, reaffirmed most recently at a February conference in Kuwait to raise money for reconstruction.

Does it really bolster Iraq’s message to the international business community that “Iraq is open for business” if Baghdad categorically disavows any responsibility for the country’s subnational debts or undermines its reputation as a sovereign credit? The question is particularly pointed since Baghdad’s 2014 funds-transfer cutoff played an important role in the KRG’s resort to borrowing. 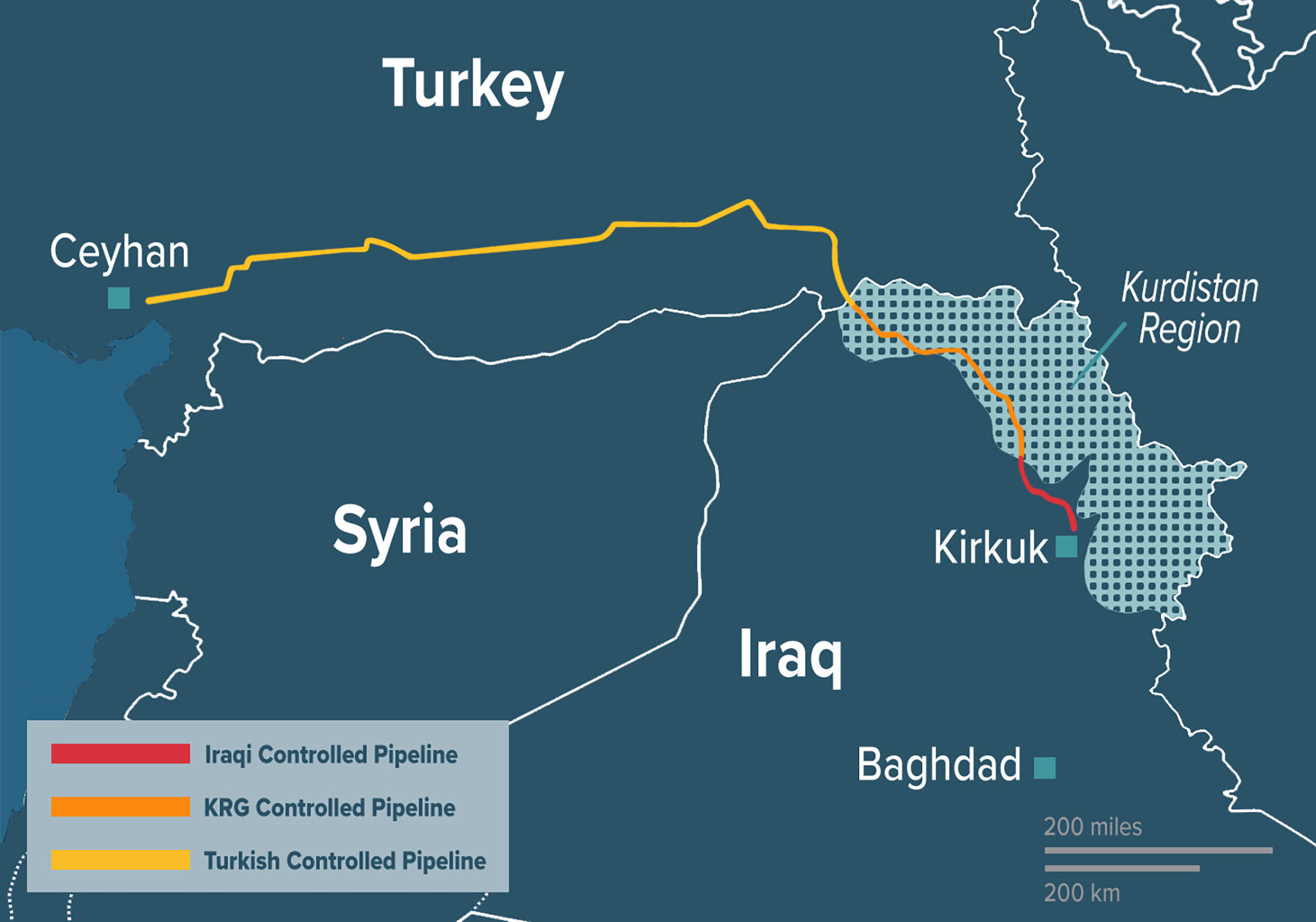 The political moment has encouraged Baghdad to take modest steps to defuse tensions with the Kurdistan Region. A ban on international flights into Erbil and Sulaimaniyah, imposed in response to the KRG holding a referendum on independence in September, was lifted in mid-March. Prime Minister Haider al-Abadi also approved a $268 million payment toward past-due salaries of KRG employees, plus $30 million for salaries of the Kurdistan Region’s military force, the Peshmerga. (The central government delayed the payments pending an audit, asserting that the KRG payroll included ghost workers and other flaws.)

As for the budget, the intense wrangling over the KRG’s proper share of revenue has concluded for now with the 2018 budget law, enacted over objections of Kurds from all parties. The International Monetary Fund reportedly opposed the plan as well, unconvinced that the sharp cutback in the KRG share constituted sound budgetary practice

Despite an audit of the agreements for the first half of 2017, the earlier lack of transparency surrounding the deals have raised questions among Baghdad authorities and some analysts about possible corruption. In any case, there is an inherent contradiction in Baghdad’s policy: The Iraqi budget specifies that the KRG must export at least 250,000 barrels per day with the proceeds flowing through the central government’s coffers. Yet the central government objects to any remuneration of costs and profits to the companies that produce the oil.

Mutually beneficial solutions should be achievable for the wrangling over both oil and debt. Baghdad, for example, could pay a transit fee to the KRG to export Kirkuk oil via the pipeline that runs through the Region. KRG debts could be restructured with Baghdad’s help, possibly in return for some form of central government guarantee.

Flexible strategies like these might emerge after the elections if realism and a sense of common purpose prevail, helping Iraq advance toward a more stable and prosperous future.