One rainy afternoon in early January 2014, I met with a group of Syrian women in a Geneva café as the latest rounds of Syria peace talks were getting underway. They had organized a nearly country-wide network of women who were already working on resolving conflicts at the local level in Syria and had come to Geneva to bring their voice to the talks. However, sadly, they were shut out of any participation by the Syrian government, the opposition delegations and the UN.

This flies in the face of strong empirical evidence for the importance of including women in every aspect of making and sustaining peace. An International Peace Institute study of 182 signed peace agreements between 1989 and 2011 found that when women are included in peace processes, there is a 35 percent increase in the probability that a peace agreement will last 15 years or more.

Evidence indicates that women participants in peace processes are usually focused less on the spoils of the war and more on reconciliation, economic development, education and transitional justice – all critical elements of a sustained peace.

The inclusion of women can and must take many forms, especially in the effort to address rising global violent conflict that since the end of the Cold War has occurred within states, with armed insurgencies or civil wars tearing countries apart. The end to these conflicts cannot be forged through only a top down peace process, with only armed actors at the negotiating table. Instead, it requires a more inclusive process—one that includes women playing more pivotal roles in building a peace from the bottom up as well as from the top down, engaging multiple stakeholders.  Parties must come together not just in the capital city but also at the local level where communities are confronted with a host of critical issues that left unaddressed could unravel any peace deal.

In 2015, U.S. Institute of Peace launched a project in Colombia to support a network of women peacebuilders and women-led organizations committed to nonviolence and mediation. With members that spanned every sector of society, this network complemented the formal peace process as it got underway.  Women’s groups negotiated local ceasefires with armed groups and won the release of hostages. They pressured insurgents to lifts roadblocks and documented human rights violations. They protested budget priorities of local governments and sought solutions to drug trafficking and other illegal activity.  Some of these women were invited to the negotiating table for the Colombia peace talks in Havana.  One third of the table participants were in fact women.  Among other roles they were instrumental in ensuring that the concerns of the war’s victims were reflected in the reconciliation and accountability mechanisms in the final agreement.

Such results were catalyzed by the landmark U.N. Resolution on Women, Peace and Security passed in October 2000, which affirmed the important role of women in the prevention and resolution of conflicts and emphasized the importance of their equal participation and full involvement.

Before the passage of the U.N. Women, Peace and Security act, a review of 664 peace agreements from 1990-2000 by U.N. Women noted that only 11% of them included any reference to women’s security and inclusion. And from 1992-2011, only 4% of signatories and less than 10% of negotiators were women.

The good news is that progress is being made.  In 2015, provisions designed to address women’s security and inclusion were included in 7 out of 10 peace agreements signed that year.

In early October of this year, the U.S. Congress passed with bipartisan support the Women, Peace and Security Act of 2017, sponsored by Senator Jeanne Shaheen, that instructs the US government to develop a comprehensive strategy to increase and strengthen women’s participation in all aspects of peace negotiations and conflict prevention, working with international partners. The bill notes the important role that women play in sustaining peace, especially in fragile environments.

Systematic and representative inclusion of women in a broad range of peace and security issues is not only important to ensuring a successful negotiation, but also for ensuring that women’s interests are being addressed. Professor Valerie Hudson at Texas A&M University has used quantitative analysis to demonstrate that the security of women is integrally linked to the security of the nations in which they live.  And security is linked to the ability of women to sustain peace through leadership roles and to build peace by being fully at the table.  Gender equality is a stronger indicator of a state’s peacefulness than other indicators, such as GDP.

We still have a long way to go in fully unleashing the potential and power of women in building and sustaining peace, especially in those countries most affected by violent conflict.  At a time of rising violent conflicts, at great global financial and human costs, this is a strategy that makes sense.

When South Sudan achieved independence in 2011, many South Sudanese women hoped it would lead to improvements on gender and security issues. In the years since, recurring civil conflict has unfortunately delayed these aspirations — but as with the independence movement, women have been at the forefront of the country’s resurgent peace process. Rita Lopidia, executive director of the Eve Organization for Women Development and the 2020 recipient of USIP’s Women Building Peace Award, discusses how South Sudan’s national action plan on women, peace and security helped guide women’s involvement in the revitalized peace agreement as well as how her organization is working with both men and women on gender and peacebuilding issues.

Myanmar’s women have assumed an unprecedented leadership role in the pro-democracy resistance since the 2021 coup. From nonviolent protest movements to fighting in People’s Defense Forces (PDF) to the National Unity Government (NUG), women have been instrumental in the fight against the ruling junta’s brutality and oppression. But as Myanmar’s network of resistance groups slowly weakens the junta’s grip, resistance leaders are now faced with a daunting task: How do you re-establish security and stability in a country long plagued by civil conflict? 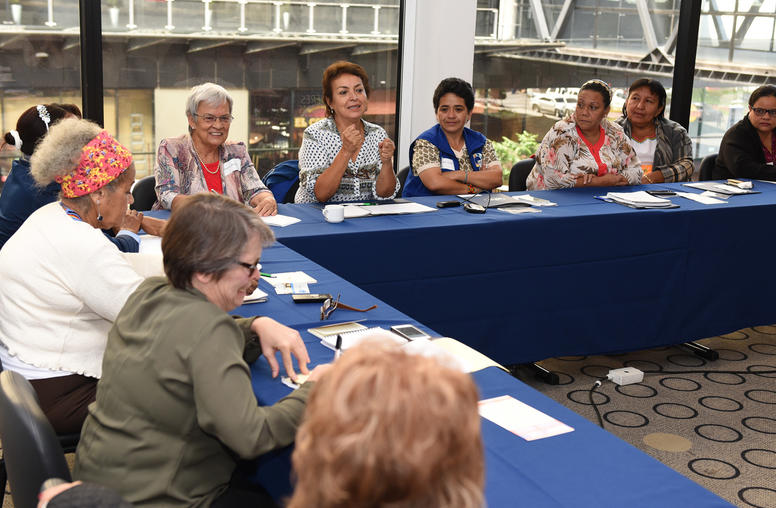