Iranians head to the polls on May 19 to determine whether President Hassan Rouhani wins another four-year term, or is ousted or forced into a runoff by one of his challengers. The result has ramifications for relations with the U.S., as President Trump suggests a tougher line from Washington, and it will impact Iran’s actions in a Middle East roiled by wars in Syria, Iraq and Yemen. Rouhani has been more open to engaging with the West and improving relations with Iran’s Sunni neighbors in the Persian Gulf than his conservative critics.

The presidential election is just as much about who succeeds the supreme leader. Rouhani, who is backed by reformists and centrists, leads a field of five candidates in public opinion polls. But he may not be a shoo-in for a second term. His main rival, Ebrahim Raisi, is a hardline cleric rumored to be a potential successor to Supreme Leader Ayatollah Ali Khamenei, who turns 78 this year.

Who are the candidates?

Rouhani is a mid-ranking cleric, former national security adviser and former member of parliament. Under his administration, Iran negotiated a landmark deal with the U.S. and five other world powers in which Tehran curbed its nuclear program in exchange for sanctions relief. On domestic issues, he secured some easing of social restrictions. He is a member of the Expediency Council and the Assembly of Experts, two powerful bodies.

Raisi also is a mid-ranking cleric, with close ties to Khamenei. Raisi serves as Custodian of Astan Quds Razavi, an influential position that oversees and maintains the shrine of Imam Reza in Mashhad, the most holy site in Iran for Shiite Muslims, and its multi-billion foundation. He allegedly was one of the four members of the so-called “death commission” that oversaw the 1988 execution of thousands of political prisoners. He later held a variety of high-ranking judicial positions.

On May 15, the other prominent conservative in the race, Tehran Mayor Mohammad Bagher Qalibaf, dropped out. He urged his supporters to vote for Raisi. On the same day, independent candidate Mostafa Hashemitaba said he would not quit the race but said he would vote for Rouhani. On May 16, Eshaq Jahangiri, a reformist who has been Rouhani’s first vice president since 2013, withdrew as expected and urged voters to support Rouhani.

The remaining candidate is not a serious contender. Mostafa Mirsalim, a conservative, has been a member of the Expediency Council since 1997, and with former Presidents Khamenei and Akbar Hashemi Rafsanjani. But less than 3 percent of respondents said they would vote for him in a May 7-8 poll.

Have there been any surprises?

An early election poll suggested that Rouhani might be the first president to not win re-election. More than half of respondents, 56 percent, told IranPoll that Rouhani was “very likely” or “somewhat likely” to lose. A poll conducted on May 7 and 8 showed Rouhani in the lead, but his rivals have started to close the gap. Raisi, who was largely unknown to voters a month ago, was just 15 points behind the incumbent, according to the Iranian Students Polling Agency.

No one scored over 50 percent. If no candidate wins a clear majority, Iran will hold a run-off between the top two. Together, the two conservatives tallied over half the vote while Rouhani had support from less than 42 percent of voters. The results, taken with Qalibaf’s subsequent support for Raisi, suggest the race could be close. On the other hand, later polls by IPPO Group had Rouhani at 55 percent or more, sometimes more than 10 points ahead of Qalibaf and Raisi combined.

What is the main issue?

The economy is the primary issue. The 1979 revolution was carried out in the name of the “oppressed,” but decades of international isolation and sanctions crippled the theocracy’s ability to deliver. Iranians are increasingly frustrated with unemployment, inflation and the gap between rich and poor. The economy is largely the executive branch’s responsibility.

What role has the nuclear deal played in the campaign?

Rouhani campaigned in 2013 on the promise that a nuclear agreement with the international community would lift crippling sanctions. But the 2015 nuclear deal has yet to yield significant benefits for the average Iranian. In an April 2017 poll, nearly two-thirds of respondents said the economy was either “somewhat” or “very bad.”

Rouhani has tried to tout improvements during the campaign.

“The living standards of Iranians have improved,” Rouhani said April 27 on national radio. “Incomes of pensioners and those on welfare support have increased in the past four years.” 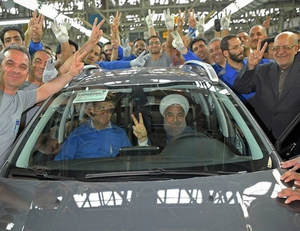 On May 2, he launched the production line of a joint venture between French carmaker Peugeot and its local counterpart Iran Khodro. He posted a picture of himself in a car fresh off the line surrounded by factory workers on Instagram.

Raisi has based his campaign largely on challenging the shortcomings of Rouhani’s government.

“Today, 30 percent of our young people are out of jobs and unemployment is over 12 percent,” he told supporters at a Tehran stadium on April 29. “We are facing an unacceptable situation because of weak management.” He has pledged to create 4 million jobs and triple cash subsidies for the poorest Iranians.

What is the tone of the campaign?

Combative. Rouhani has rebuked his rivals and even scolded hardline clerics and the powerful Revolutionary Guards. At campaign rallies and in television debates, he has presented the election as a stark choice between freedom and suppression. He chastised other candidates for hypocrisy.

“We’ve entered this election to tell those practicing violence and extremism that your era is over,” he said on May 8. “The people of Iran shall once again announce that they don’t approve of those who only called for executions and jail throughout the last 38 years.”

Hard-liner Ebrahim Raisi won Iran's presidential election amid a historically low turnout on June 18. He will be inaugurated in early August and have significant influence over domestic policy and foreign affairs, although Supreme Leader Ayatollah Ali Khamenei has the ultimate say. Raisi’s election comes as the Biden administration is working with other major powers to bring the United States and Iran into full compliance to the 2015 nuclear deal, which the president-elect has expressed interest in reviving to take advantage of its economic benefits. USIP’s Garrett Nada looks at the implications of Raisi’s election victory and what it could mean for the Islamic Republic’s ties to the outside world.

Since the end of World War II, there have been several attempts that ultimately failed to establish a regional security framework in the Middle East. These attempts have historically fallen short, undermined by distrust, power politics and conflict. Today, a new window of opportunity may be emerging to establish a stable, broadly accepted mechanism for deescalating conflicts, setting norms and building confidence and cooperation between states in the region. World powers should consider the ongoing Vienna talks — aimed at reviving the Iran nuclear deal that the Trump administration withdrew from — the first step in this direction.