Iraq’s execution yesterday of 36 men whom it accused of committing the deadliest single atrocity by the Islamic State group underscores that any stabilization of Iraq will require international support to strengthen the country’s overburdened judicial system, according to USIP Iraq specialist Sarhang Hamasaeed. Iraq’s government came under intense pressure from the country’s Shia Muslim majority population, and from the Shia “Popular Mobilization Forces,” or pro-government militias, to conduct the executions, Hamasaeed said.

Iraq hanged 36 men for the killings yesterday at a prison in the country’s south, the government said. Little information was reported about the trials in which they were convicted. The execution, the largest since Iraq’s war against ISIS began more than two years ago, took place after some elements of the Shia forces threatened to attack Iraqi prisons and execute convicted ISIS militants themselves, Hamasaeed said. Public pressure in Iraq for such executions increased after an ISIS bombing in Baghdad killed more than 300 people last month.

The United Nations and human rights groups voiced concern at the executions. "Given the weaknesses of the Iraqi justice system, and the current environment in Iraq, I am gravely concerned that innocent people have been and may continue to be convicted and executed, " U.N. High Commissioner for Human Rights Zeid Ra'ad al-Hussein said in a statement reported by Reuters.

“Steps by the Iraqi government that deliver real justice, and that build a public understanding that justice is being provided by the government, rather than other forces, are important to reconciliation in localized conflicts, which are deepening in the wake of ISIS’s atrocities,” said Hamasaeed. “But there has been so much violence at the retail level, and the Iraqi judiciary does not have the capacity to handle this massive load of extremely sensitive cases. The judiciary will need support to handle this caseload.”

ISIS killed an estimated 1,700 Shia military cadets from Camp Speicher, a former U.S. military base in 2014. The extremist group released horrific videos of the killings, showing the young men being marched in a long column along a highway, bundled into trucks, their hands bound behind them, and then being lined up in fields or on a Tigris River bank to be shot from behind, execution style, their bodies buried in mass graves or shoved into the river.

After the massacre, many Shia called for vengeance. Hundreds of thousands of Sunni residents in and near the city of Tikrit, adjacent to the base and the massacre, fled their homes, many fearing that Shia militias would hold them responsible for the killings and stage revenge attacks.

A pair of Iraqi non-government organizations last year mediated a peace agreement between Shia and Sunni tribes that averted revenge killings. It established a mechanism for vetting returnees to ensure they had not been complicit in the massacre. By  April this year, more than 268,000 displaced people returned to their homes in Tikrit and the surrounding Salahaddin Province. 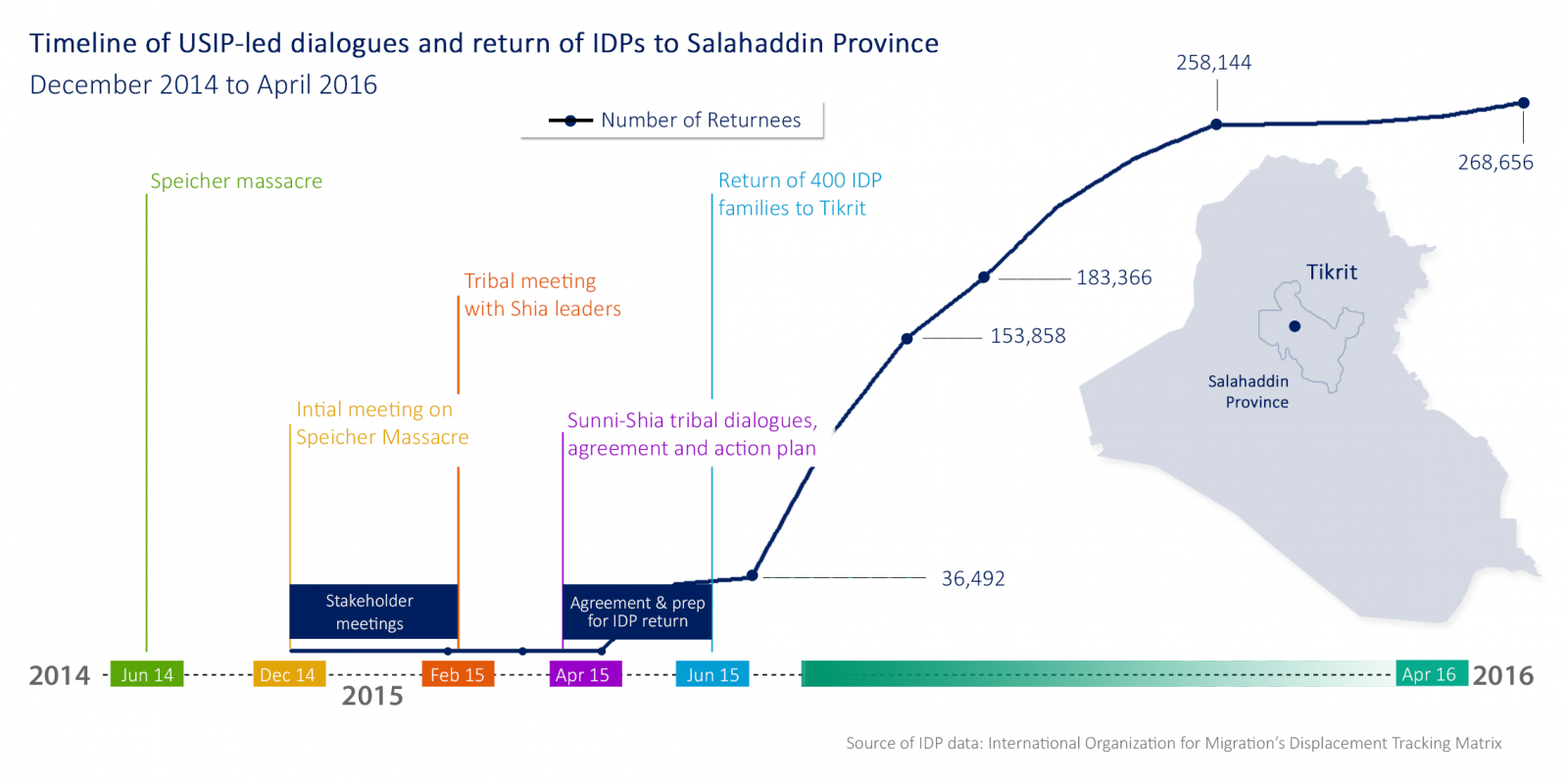 The talks were co-led by the Network of Iraqi Facilitators, a voluntary association of civil society leaders, including lawyers, human rights activists and a prominent physician, trained in conflict resolution. The facilitators, with an allied group called SANAD for Peacebuilding, have been trained and supported by the U.S. Institute of Peace. The two Iraqi organizations have mediated an end to violence in several other regions of Iraq over the past decade as well.

As the international community supports the Iraqi government’s offensive to push ISIS from the remaining areas it controls in Iraq, including the second-largest city, Mosul, they will have to support such local peacemaking efforts across the country, according to Hamasaeed, a USIP senior program officer.

The Iraqi military, with help from U.S. troops, is preparing an assault to recapture Mosul from ISIS and news reports say the attack could come within months. “But military triumphs are unlikely to lead to an enduring peace without … reconciliation,” Hamasaeed wrote last month in Defense One. “While it’s obviously critical to provide electricity and water, and to build health clinics and schools, it also is essential that the conflicts underlying the destruction be understood and addressed,” in order to stabilize Mosul and other cities after they are retaken from ISIS, Hamasaeed wrote in an essay with USIP President Nancy Lindborg.

Of the many local conflicts tackled so far by the Iraqi peacemaking groups, “the Speicher intervention is one of a kind,” said Abdul Aziz al-Jarba, a leader in the facilitators’ network. “It was the first time to have an intervention on such a dangerous and critical issue,” al Jarba said in an interview last year. “We think it could be an example for other situations in the future.”