Khadija Isse Fara'Adde, the Somali master poet–known as an abwaan–recently ended a term at USIP as part of her Mandela Washington Fellowship, the flagship program of President Barack Obama's Young African Leaders Initiative (YALI). The initiative provides academic coursework, leadership training and networking in the United States to strengthen the influence of the continent's youth and prepare them for leadership. 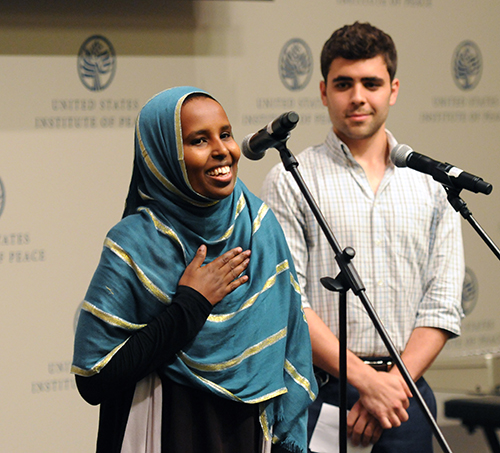 Back home, her role as an abwaan in a field dominated by men was more than a feminist breakthrough. Poetry recital is ingrained in the Somali psyche as a respected means of relaying messages and capturing hearts. Just as poetry forged her Somali identity in that otherwise fractured society, she now uses her abwaan status to bring citizens and officials together. She draws on their common culture to break down mistrust of state institutions that are struggling to re-establish legitimate governance after decades of abuses and chaos.

In Lebanon, another splintered society, documentary filmmaker Leon Shahabian uses his art to open the eyes of young people to the traumatic consequences of violent conflict, specifically the 1975-1990 civil war that tore Lebanon apart. For a new film in production called "Confessions From the War," Shahabian collects stories from former fighters to show the personal cost and dismal results of war. The ex-combatants, he said, hope to avert another civil war at a time when many teenagers, having no memory of the last one, are attracted to sectarian forces that are trying to expand the Syrian conflict into Lebanon.

In Northern Ireland, symbols that are culturally recognized the same way by opposing sides were used to try to communicate a message of peace. When the Northern Ireland police sought a more service-oriented, less heavy-handed approach, they added to the harp and clover of the Royal Ulster Constabulary seal the scales of justice, an olive branch of peace and a torch symbolizing enlightenment. The move was intended to signal the ethos of the newly formed Police Service of Northern Ireland.
These examples and many others demonstrate a paradox: sometimes, beneath the clashing identities that often fuel violent conflict runs an undercurrent of cultural cohesion that can be tapped to promote peaceful outcomes.

Arts and symbols can demarcate identity, creating separation that can lead to conflict, Katherine Wood, a grants advisor at USIP, said recently. But arts and symbols also can bridge divides between separate identities and thus contribute to peace through mutual understanding of differences, or by constructing a common identity, she said.

Shared imagery in poetry, narratives of a previous generation's war, or local and universal symbols can be oriented toward peacebuilding—rival clans enjoy a poem, young people divided by sectarian suspicion hear from elders who fought on all sides, or a hostile population sees its government extending, at least symbolically, an olive branch.

The message is clear: peacebuilding projects could benefit from much more frequent and serious efforts to incorporate arts and culture. After all, many initiatives to prevent, manage and recover from violent conflict already rest on broadening a sense of common identity so that divergent groups recognize their stake in a cohesive and peaceful society.

Peacebuilders ignore the power of culture at their peril, Cynthia Schneider, a Georgetown University professor and retired ambassador, said in a July discussion at USIP. Schneider said she has spent her life trying to get practitioners to think about the power of culture in diplomacy and international affairs. Her suggestions are often met with "blank stares."

Those who promote conflict, by contrast, thoroughly understand the relationship, Schneider said.

"Violent extremists around the world and throughout history target culture because culture is the root of identity," she said. "If you want to control people, you have to undercut their roots."

Yet art and culture for peacebuilding can also be a fraught arena. Subjective reactions to art are based at least in part on political perspective and identity. Just as culture can help form common ground, differing interpretations may reinforce stereotypes or exacerbate group differences.

In Northern Ireland, for instance, disputes over symbols are intense and continuing, the police symbols notwithstanding. Former U.S. diplomat Richard Haass cited parades and flags as two of the three issues he had to confront in conducting peace talks with the major players in Northern Ireland in late 2013; the other issue was addressing unsolved killings during the 1968-1998 conflict commonly called "the Troubles."

'The Toughest Area of Negotiations'

Flying identity-defining flags and symbols, in particular the Union Flag of the U.K. and the sovereign flag of Ireland, was "the toughest area of negotiations," he told BBC News in December 2013.

The difficulty stemmed from the choice that Northern Ireland residents were given under the 1998 Belfast/Good Friday Agreement to "identify themselves and be accepted as Irish or British, or both, as they may choose." The 2013 talks collapsed without resolving the question of official and unofficial flag-flying in public spaces, and identity in Northern Ireland remains fractured today.

By channeling identity through a symbolic form of art, a dangerous attachment can take hold that sometimes leads to violence in defense of, or an attack on, the symbol. Shiraz Maher, a researcher at the International Center for the Study of Radicalization and Political Violence, identifies the underlying ingredients of radicalization across a range of societies as "righteous indignation, defiance, a sense of persecution and a refusal to conform."

Yet research has shown that identity is susceptible to change by a variety of external factors. This is where creative peacebuilding can get to the roots of violent conflict. Art can touch on elements of the human experience that are beyond words alone, enhancing counter-narratives to violence and bolstering alternative, positive storylines.

Documentary films—usually about a past or continuing situation—can shore up and alter identities as a tool for peacebuilding and violence prevention. Shahabian, of Layalina Productions, explained at the USIP event that in conjunction with the war-fighter stories he has already collected in still-fractured Lebanon, a program is needed to bring these former soldiers to schools and other venues, where they can talk about how violent conflict has affected their lives. They speak with a unique authority, he said.
They often say, "'I lost my future, my loved ones, educational opportunities,'" he says. "'Don't listen to politicians. Don't listen to your teachers. Listen to me. I used to be just like you not too long ago.'"

Arts may well be a key to effective reconciliation after a violent conflict, especially through film, theatre and perhaps even social media, USIP scholar Elizabeth Cole remarked during a recent event on Colombia's peace process and transitional justice.

"Maybe these are much better ways of touching young people and getting around some of the political blockages," Cole said. Indeed, as Wood argues in a recent issue of the USIP publication Insights, arts "fundamentally provide new categories of analysis and new languages, verbal and nonverbal. The arts inspire, elicit, evoke, provoke, teach, challenge, memorialize, idealize and unmask hidden truths. They are deeply ingrained in human experience."

Fara'Adde sees creativity as a key to treating the underlying causes of violence in Somalia. As a founder of the Mogadishu City Volunteers, a movement of united youth groups aiming to make the capital city safer and better all around, Fara'Adde uses music and poetry to bring together Somalis from the government and the community who normally wouldn't meet. At events she organized, citizens and security officials did the same traditional dances to beloved Somali tunes.

"Arts and culture are a way to draw attention to peacebuilding work," Fara'Adde said in an interview during her time at USIP. In everyday life, it is easy to see government and the governed as separate. But when everyone is dancing and singing together, the mixing makes a visible impact on the parties. "Singing led to an outpouring of emotion, and also created a space for youths to make their voices heard."

Arts and culture for peacebuilding may be seen by some experts as ineffective or a waste of valuable resources, a soft approach in a discipline already seen by hard-core political scientists or others as soft, say Michael Shank and Lisa Schirch in a February 2008 article on the topic. But as these examples show, arts and cultural expressions can radically affect political and security contexts, for better or worse. Still, "there is very little solid theory, research or evaluation of arts-based peacebuilding," Shank and Schirch wrote.

So peacebuilders have more work to do to understand the role arts can play. In any case, these tools should be used carefully and strategically, with an open-eyed calculation of the risks. Applied with care, culture can be a connector, rather than a wedge, and the cause of lessening the intensity and frequency of violent conflict will get an enriching boost.

The massive truck bomb attacks that killed more than 300 people in Mogadishu last weekend are a tragic reminder of the scale of suffering caused by terrorism in Somalia and across the developing world. Yet the solidarity that...