Problems such as shortages of troops in conflict zones like South Sudan, failures to protect civilians from atrocities and periodic corruption or abuse scandals prompted U.N. Secretary-General Ban Ki-moon to create the 17-member High-level Independent Panel on U.N. Peace Operations in October. Their charge is to conduct a comprehensive review of peacekeeping and political missions and determine how such undertakings can be strengthened in the future. A final report is due at the end of May. The last time the UN fully examined its peacekeeping operations was 15 years ago in a study led by longtime UN diplomat Lahkdar Brahimi.

“While challenges to peacekeeping have fundamentally changed, the truth is that we, as a peacekeeping community, largely have not,” Blinken said in remarks at the U.S. Institute of Peace, which conducts extensive training for peacekeepers in Africa on skills such as negotiation and mediation. “In the face of volatile, asymmetrical threats from Mali to the [Democratic Republic of Congo], we know it won’t be enough to make small changes, small tweaks around the edges of the existing system. We have to embrace big, bold thinking that fundamentally redefines peacekeeping for a new era.”

The USIP event included a discussion with members of the panel, including Chairman Jose Ramos-Horta, a Nobel Peace Prize recipient who campaigned for independence for his nation of Timor-Leste for 30 years and went on to serve as the new state’s foreign minister, prime minister and head of state. He since also has served as the Secretary-General’s special representative and head of the UN Integrated Peacebuilding Office in Guinea-Bissau. 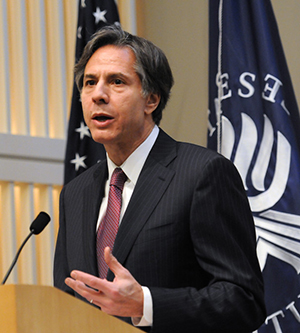 The discussion, co-sponsored with the State Department and the Better World Campaign, which seeks to foster ties between the U.S. and the UN, was part of an extensive round of public hearings and workshops that the panel is conducting worldwide to gather input for the assessment. Since UN began peacekeeping operations with military observers in the Middle East in 1948, the Security Council, -- made up of the U.S., the U.K., France, Russia and China -- has authorized 69 peacekeeping operations. The UN currently is managing 16 peacekeeping missions with a total of almost 130,000 personnel, and among the questions that have arisen is the proportion of troops coming from developing countries.

“We have seen a growing gap between those who mandate operations and those who carry them out,” Ramos-Horta said. “These are not the principles on which the United Nations was founded, and we hope that countries with the means may contribute more.”

U.S. Ambassador to the UN Samantha Power earlier this week in Brussels urged European nations to provide more troops. Blinken noted at USIP that the U.S. contributes the most financially to UN peacekeeping, covering more than 28 percent of annual costs and providing airlift, logistical support and medical services. The U.S. also has 1,300 peacekeepers in Kosovo and the Sinai Peninsula.

But the complexity of the environment where peacekeepers operate today has increased immeasurably, Blinken and panel members said. Blinken, who previously worked in the White House as Vice President Joe Biden’s foreign policy adviser and then as Principal Deputy National Security Advisor to President Barack Obama, cited civilian atrocities, the recruitment of child soldiers and the expanding weapons and drug trade as threats confronting peacekeepers and the communities where they operate.

George Moose, USIP’s vice chairman of the board and a former assistant secretary of state for Africa, said, “UN peace operations have gotten more complex not only in terms of the breadth of the mandate, but also the kinds of challenges that UN peace operations are being asked to take on.”

The mission in the Democratic Republic of Congo, for example, has had both the traditional mandate of dispute resolution and implementing a peace accord under Chapter 6 of the UN Charter, as well a charge to protect civilians and aid workers under Chapter 7. In 2013, the Security Council even created a special “intervention brigade” for that force. The brief of peacekeepers sent to Mali in 2013 included not only political negotiations but also counter-terrorism.

Ameerah Haq, another panel member who just left her post as the UN under-secretary-general for field support, said the peacekeeping panel also is coordinating its work with a separate UN board that is reviewing peacebuilding mechanisms and a third that is examining the implementation of Security Council Resolution 1325, which calls for greater protection of women and girls in conflict zones and increased involvement of women in decision-making about solutions.

Ramos-Horta relayed a story published almost a year ago by the UN and Huffington Post of a three-year old girl who had walked for four hours, leading her elderly and blind father to a humanitarian relief station that was distributing food and supplies from UNICEF and the World Food Programme during the brutal conflict in the still-new nation of South Sudan.

The girl, named Nyakhat Pal, and her father were caught up in a war that already had killed thousands and forced more than 1 million from their homes, dashing hopes that the country’s three-year-old independence from Sudan to the north would forestall further violence. The panel chief said he would name the final report in honor of her.

“We have to answer to her why we have failed,” Ramos-Horta said, “or whether we can deliver peace to her, to her mother, to her brother and sister.”

After months of public protests, a military coup has toppled Mali’s government. USIP’s Susan Stigant looks at the path forward, saying “there’s a real tension in trying to figure out how to restore that constitutional order without necessarily going back to the status quo prior to the coup.”