Nigeria's February 2015 general elections have been described by former Assistant Secretary of State Johnnie Carson, a senior advisor at the U.S. Institute of Peace, as being both "intensely watched and extremely important." The vote poses risks as the country struggles with internal conflicts, but it also presents possibilities for citizen engagement and political stability.  Yet a workshop we conducted recently in the capital Abuja exposed some critical gaps in efforts to prevent election-related violence similar to the politically-driven communal clashes that have roiled this oil-rich nation in the past.

Our two-day workshop in September, conducted in partnership with the West African Network for Peacebuilding (WANEP)-Nigeria, was aimed at preparing representatives from 20 Nigerian civil society organizations to take proactive steps toward a peaceful electoral process. USIP's work to prevent election violence in Nigeria dates back to 2007.

A 2011 USIP workshop in partnership with WANEP convened civic activists from the city of Jos in central Nigeria and prompted a coalition of organizations to add violence-prevention measures to their public-education campaigns. Following the elections that April, communal attacks and other violence related to disputed results killed more than 800 people in northern Nigeria, even though the balloting was generally viewed as fair, according to Human Rights Watch. The violence that year primarily occurred in 12 states, but not in Jos, though it's hard to know definitively whether the prevention measures played a role. Given the history of tumult in Nigeria, Africa's most populous country, this year's workshop was convened five months prior to the scheduled election on Feb. 14 to ensure that measures are put in place well in advance.

The workshop participants lauded a new openness that they've seen in Nigeria's Independent National Electoral Commission (INEC), and they formed a coalition at the end of the workshop to unify their violence prevention efforts. But the activists also realized they hadn't considered the potential for violence throughout the electoral process, not just during campaigning or on the day of voting, nor have they extensively engaged young people in peace efforts in a country where one third of the population of 140 million is between the ages of 10 to 24 years.

The new Coalition for Nonviolent Elections in Nigeria (CONEN) builds on the work of the similar alliance that was established before the 2011 elections by the participants from Jos.  Such coalitions can help member organizations collaborate on unifying issues such as peaceful elections that span other thematic initiatives -- civic education, work with youth or women's empowerment, for example. Coalitions also help mitigate some of the competition that can arise among civic groups. Despite well-organized and established election-observation networks such as the Transition Monitoring Group, no coalition focuses entirely on prevention of electoral violence.

One participant explained the effect of joint efforts: "I know I am not alone in the fight. I can reach out to other organizations to help out in the struggle." 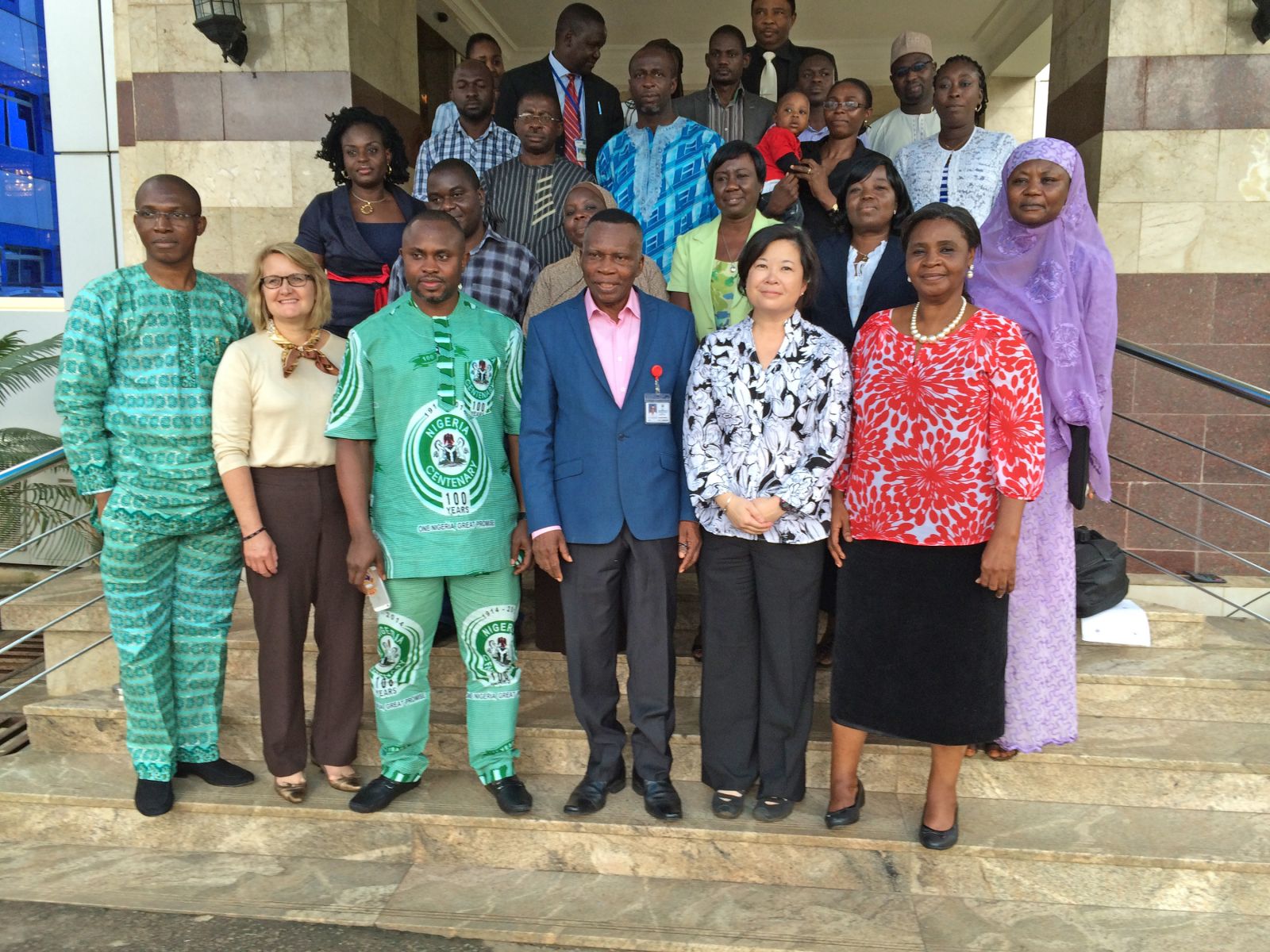 An analytical exercise raised important questions about INEC's plans to conduct elections in insecure areas such as parts of the north beset by violence and instability associated with the Boko Haram militant group.  INEC officials have said providing security for elections is the responsibility of other government entities. Yet in the workshop, participants pressed the INEC representative attending the session for specifics on INEC plans to conduct elections in insecure areas. Officials offered few details, and participants committed to keeping this issue in the spotlight.

Analysis of the electoral cycle highlighted the point that violence in Nigerian elections tends to occur throughout the electoral cycle, from party-nomination processes through post-balloting challenges, as was seen recently in the Adamawa gubernatorial elections. Yet civil society had planned to focus primarily on election day and the counting process.

In addition, civic education efforts mostly involve "get-out-the-vote" initiatives, often without including steps to prevent violence.  This issue – the threat of election violence throughout the cycle – seemed to be the biggest takeaway from the workshop, according to participants' evaluations.

The coalition also determined that youth outreach would be their No. 1 priority for initiatives to prevent electoral violence.  Through exercises to identify risk factors for electoral violence, participants realized that few of the activities they were planning or considering focused specifically on young Nigerians, who are susceptible to manipulation by political figures and their backers because of factors such as high unemployment.

Workshop participants discussed potential lessons from case studies, including the 2008 Ghana election depicted in the film "An African Election," which has been screened at festivals including Sundance. After viewing the film, the Nigerians said they were impressed by the restraint and discipline that opposing parties, security forces and the Ghanaian public showed in a very tight election, and with a so-called "strong room," where opposing political party representatives and candidates gathered to iron out disputes in hopes of avoiding violence. Even prior to the workshop, Nigerian civil society had begun taking a similar but slightly different path – creating a situation room that would engage a broad spectrum of their organizations in addressing issues throughout the electoral process.

Participants and others with whom we met in another two days of meetings in Nigeria seemed cautiously optimistic about the prospects for a peaceful and credible election in February.  They noted that 34 commission officials had been relieved of their duties because of malfeasance and that electoral officials have done a credible job of conducting several recent by-elections. Misbehaving politicians also are more often sidelined by their own errant actions than in the past.

Several of the workshop participants said Nigeria's democracy has "matured" to a point that the violence that marred previous elections isn't likely to recur. Nigeria's governing leaders demonstrated some of that maturity recently in stemming an Ebola outbreak in Lagos and Port Harcourt.  During our visit we saw extensive interviews on Nigerian television drawing attention to and explaining the crisis and numerous informative articles in local newspapers.  The World Health Organization on Oct. 20 declared the country officially free of Ebola infections and called the achievement "a spectacular success story," according to the New York Times.

Preventing electoral violence requires the same kind of political maturity, the same kind of visibility and focused effort from a range of players, from government officials to security forces to civil society. It also requires coordination among all those interests for a collaborative sense of purpose within Nigeria's complex political context.

"More and more, the issue is not credibility of INEC. INEC has done a lot of reforms," one participant told us, noting that civil society leaders now must implement the training they've received to play their role most effectively. "Now, we are moving from what we can learn to what we can do."

In the United States, there is no shortage of public opinion data on nearly every question imaginable. But in Nigeria, Africa’s most populous country, such data is more scarce and policymakers often lack detailed insights into citizen perceptions and concerns. Now, new evidence from USIP-commissioned surveys conducted in May and July 2020 of more than 10,000 Nigerians has found new relationships between violent conflict and the coronavirus response. The data shows that victims of violence are more likely to distrust the Nigerian government’s response to coronavirus.

As Africa’s most populous democracy and largest economy, Nigeria’s ability to mitigate the spread of the coronavirus within its own borders has broader implications for the entire continent. Meanwhile, the virus threatens to exacerbate the country’s existing security challenges, which in turn make an effective pandemic response more difficult. In this #COVIDandConflict video, our Oge Onubogu looks at how the Nigerian government has addressed the virus and what potential takeaways the response to COVID-19 could have for tackling the country’s epidemic of violence.