In honor of former Secretary of State Dean Acheson’s service to the United States and the cause of peace and innovation in peacemaking, USIP initiated this lecture series to deal with the important topics of the day. The lecture series helps call attention to topics that further the mission of USIP: preventing and resolving violent international conflicts, promoting post-conflict stability and development, and increasing conflict management capacity, tools, and intellectual capital worldwide.

U.S. Secretary of Defense Leon Panetta gave the 5th Acheson Lecture at USIP. In his speech, Panetta outlined a bold plan to build the capacity of other countries and thereby reduce the strains on the U.S. when it comes to solving the world’s security problems. Following his remarks, he was presented with the Acheson Award.

U.S. Senator John McCain (R-AZ) received the 4th Acheson Award and delivered the Acheson Lecture at USIP. After receiving the award, Senator McCain discussed the status of U.S. interests in the Middle East during a time of revolution and upheaval.

U.S. Senator George J. Mitchell, special envoy for the Middle East, delivered the 2010 the USIP Dean Acheson Lecture, on Monday, May 24 in front of a packed audience.

Senator Mitchell spoke about lessons learned from Northern Ireland and how, despite the vast differences between that conflict and the Israeli-Palestinian conflict, certain truths about international conflict still hold. | Read more

In remarks focused on nuclear nonproliferation and timed to coincide with the Institute’s 25th anniversary, Secretary of State Hillary Clinton delivered the 2009 Dean Acheson lecture. In addressing the United States Institute of Peace, U.S. Secretary of State Clinton talked about the important work we are doing in the area of non proliferation, including the recent report issued by the Congressional Commission on the Strategic Posture of the United States, chaired by former Secretary of Defense William J. Perry with James R. Schlesinger as vice chairman. The report examined key issues related to national security, arms control and nuclear technology. | Read more 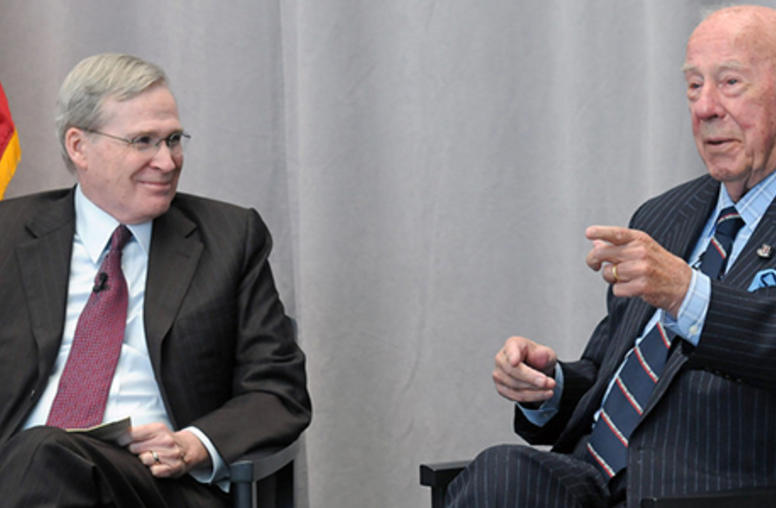 While China continues to grow as an economy and a military and political power, its overall influence relative to the United States has passed its peak, former Secretary of State George Shultz said at the U.S. Institute of Peace January 30. As China’s population ages, fewer working-age people must support a larger aged and dependent populace. “I think China, in relation to the U.S., has already reached its peak,” Shultz said in offering the Institute’s annual Dean Acheson Lecture.

With Ukraine making massive gains on the ground, Russian President Vladimir Putin’s escalating threats "show that [he] is getting a little bit desperate," says USIP's Mary Glantz. "He's been feeling a lot of pressure to show some victories," which has left the world "holding their breath to see what might happen."